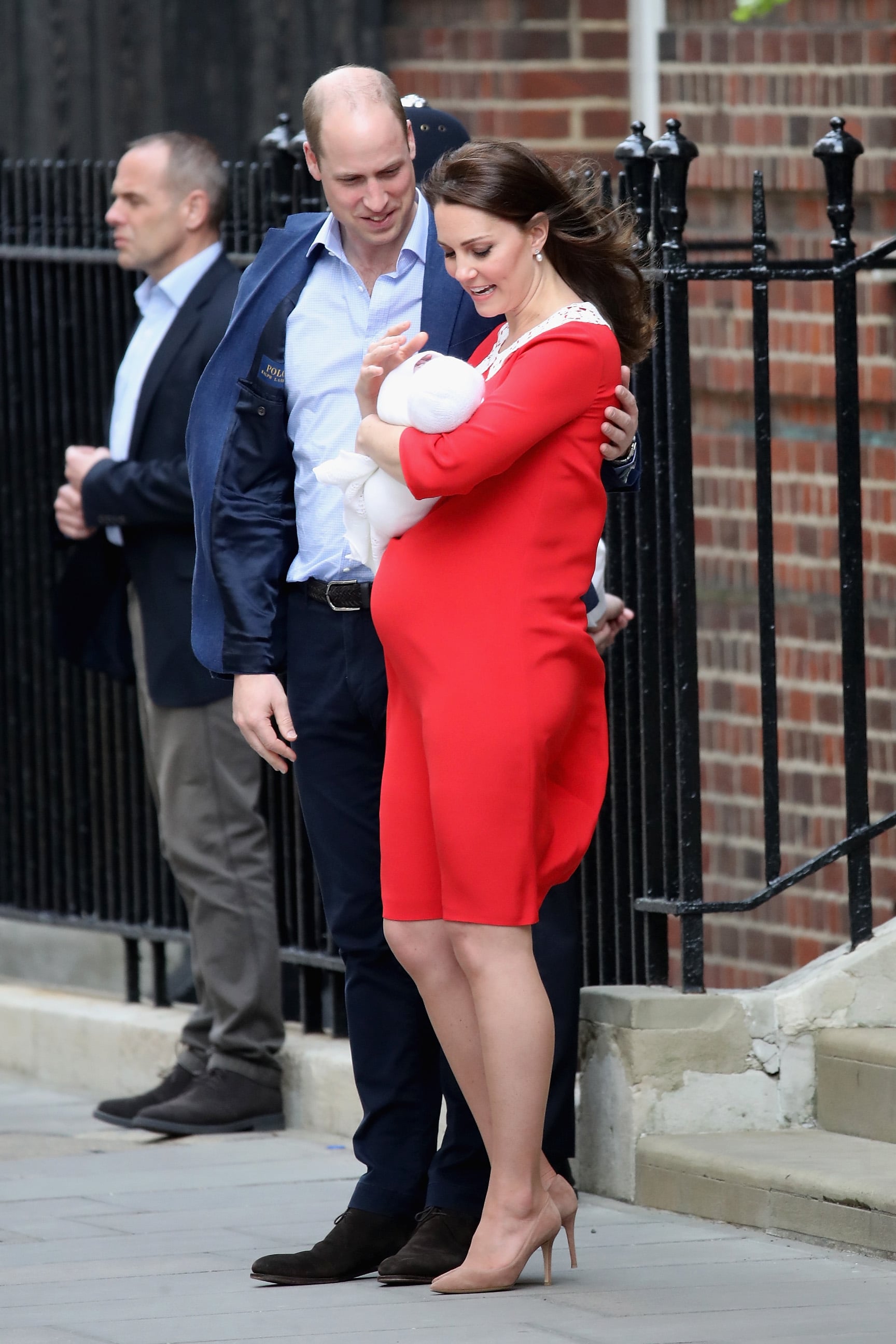 When Kate Middleton stood on the steps just outside of St. Mary's Hospital, mere hours after giving birth to her third child, the public response was one giant, but expected, contradiction. At once, fans marveled at the unrelatability of her appearance — the voluminous blowout, the makeup, the high heels! But as soon as a gust of wind blew her red silk shift dress against her skin, people were shocked to see that she still had a (gasp!) baby bump.

Yes, like any woman who had just given birth, she still looked pregnant.

She is reminding every other person out there that women's bodies, while, yes, miraculously creating life, shouldn't be hidden away the moment the miracle is over.

Although I personally loathe most discussions about women's bodies in general, I particularly despise chatter about the bodies of women who have just given birth. (I was once asked by a family friend, two months after having a baby, if I was already "baking another one so soon" afterward.) But because our society, over the course of generations, has managed to sell a fabricated narrative that women are meant to be either skinny or pregnant, I think it's worth noting the importance of this visual, one that was likely fully intentional on behalf of Kate herself.

After all, the Duchess of Cambridge has immense control over her image. Every appearance she makes has been carefully considered, every dress she wears carefully trimmed and tailored. If she didn't want the world to gawk over her bump, if she didn't want zoomed-in photos of her belly on the covers of newspapers, she had ample options to prevent such a story from circulating. Even Princess Diana, who followed royal protocol and emerged for photos with her 1-day-old baby William, cloaked her delicate frame in a tent-like garment. Kate, however, chose differently. 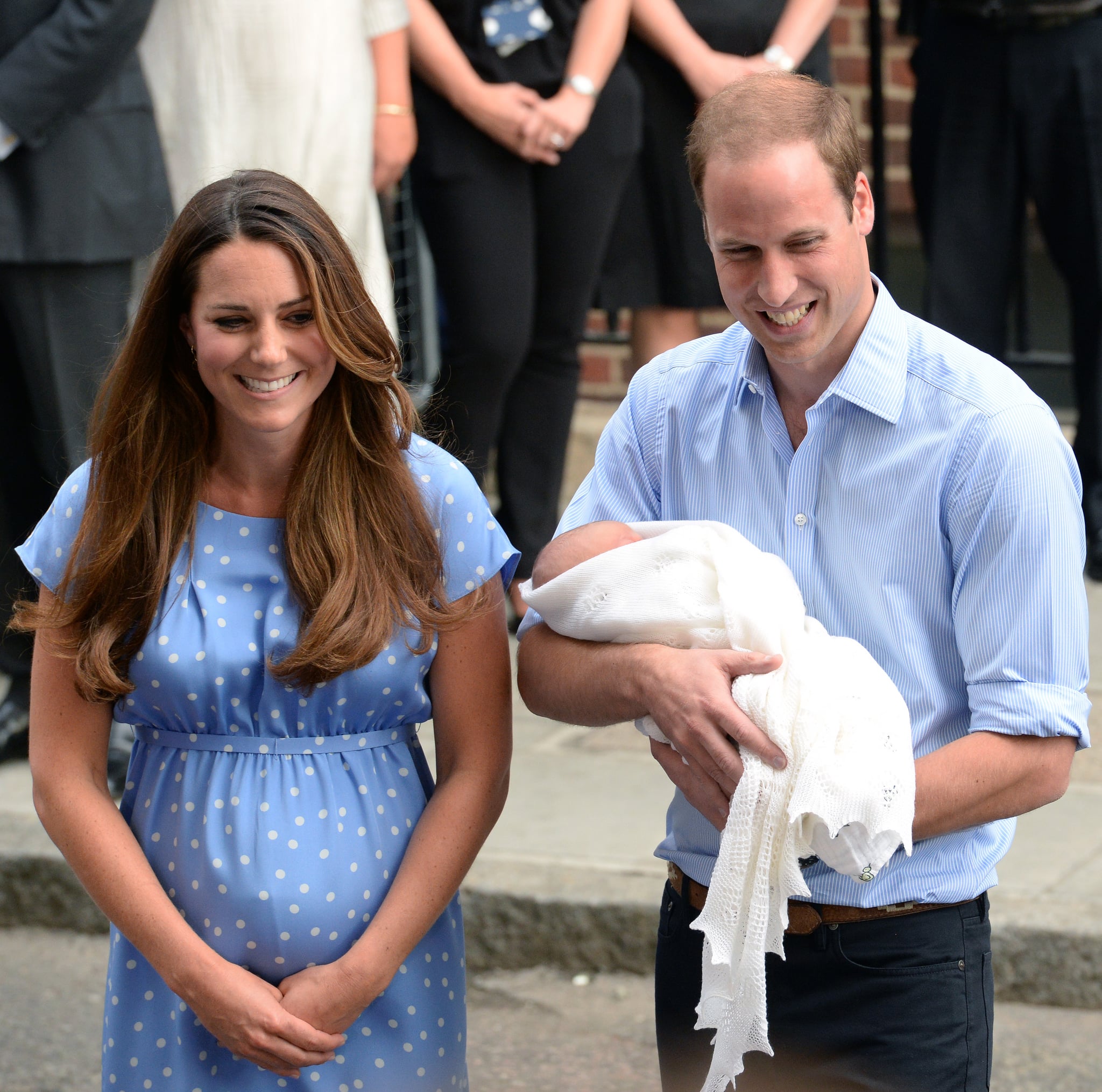 This also wasn't the first time that the world got to see her postbaby bump on full display. She did the same with her previous two births, and with Prince George in 2013, she even wore a figure-flattering empire-waist dress with her hands tucked neatly under her quite-visible postpartum belly while posing for photos.

Still, I can't chastise the general public for being so gobsmacked at the sight the first time — or why they're still talking about it five years later. Celebrities have long gone into hiding in the aftermath of having a baby, only to emerge a few months later with any shred of physical evidence that they'd been pregnant wiped clean. In those first postpartum weeks, any Instagram shots are notoriously from the neck up, that is, unless it's a beautiful breastfeeding selfie. In that case, their chest is on display (because no one has issues with bigger breasts) but their tummies are cropped out. If they do make an appearance, it's strategically orchestrated by a team of professionals, stylists, and a full glam squad to ensure any hint of a belly remains hidden.

Celebrities have long gone into hiding in the aftermath of having a baby, only to emerge a few months later with any shred of physical evidence that they'd been pregnant wiped clean.

And who can blame them? For celebrity moms like Kim Kardashian, Pink, and Kate Hudson, they were positively eviscerated for their weight gain during pregnancy — how would their body image fare when they had "no excuse" for their less-than-perfect figure?

In the years since Kate first debuted her postbaby belly, women have turned to their social media platforms to reveal the truth — that stretch marks, cellulite, and sagging skin aren't the exception to the rule at all. That women gain anywhere from 25 to 50 pounds during pregnancy but only lose 10 to 15 pounds during birth. That their stomachs take weeks, if not months (and months and months) to deflate as the uterus contracts and water weight drains. Some celebrities, like Kristen Bell, are finding a niche audience in their tell-it-like-it-is approach to pregnancy and parenting, but it's still not mainstream.

All of this is why I'm proud of Kate for standing up in front of the world with a belly. For once again reminding every other person out there that women's bodies, while, yes, miraculously creating life, shouldn't be hidden away the moment the miracle is over. That we should cherish and celebrate them still.

A lot of people call Kate's deliberate move to normalize postpartum bodies "brave." It's a term self-described by many on blogs and Instagram posts when they show off their own less-than-Hollywood-perfect figures. I won't call her brave, though, because there's no reason she — or any of us — should be made to feel brave for having a body. If anything, she's brave for pushing an eight-pound baby out of hers. But for standing up, wearing a gorgeous red dress next to her doting husband and their newborn baby? That's not brave. That's lucky.

I just hope more women would feel that way.