Blogger and mother Frida Berrigan of Waging Nonviolence discusses why her son likes to wear dresses and how allowing children to explore gender identities could be beneficial in the long run. 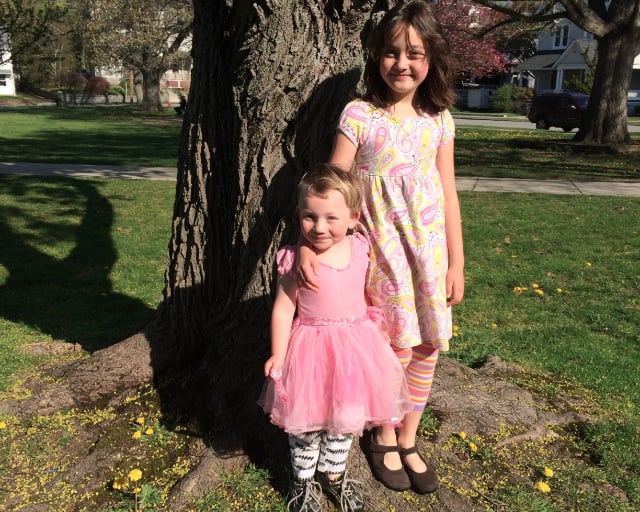 My son Seamus wears a dress.

Actually he has two: a dark pink long-sleeved ballerina number with a leotard top and a short sleeved princess dress with pearls and ribbons. They are both pilled and stained, and they disintegrate a little more with each wash. The dresses were already well loved by his cousin Leah before they were passed on to us last Christmas. We planned on storing them up in the attic to await baby Madeline's Fancy Nancy stage, but Seamus seized them right out of the box and pointed out that they were just his size. There was no telling him that the dresses were for Madeline.

Now, both dresses are a little snug and I warn him each time I squeeze his sturdy body into one of them that this might be the last time.

But for now, and as long as it fits, he rocks out an urban princess look that is all his own — tutu, leggings, running shoes — at least once a week. People don't recognize him. The crossing guard asks if we have a friend visiting. Others say things like "What a beautiful little girl." On Facebook, I posted a picture of Seamus and his sister Rosena both wearing dresses and lots of friends thought Madeline had grown up extra fast. They just saw the dress, not the kid wearing it.

Patrick and I don't let him wear the dresses every day — they get filthy really fast for one and what's more it takes extra energy to explain our small boy princess to a narrow world. But it is always a good exercise when we do it and results in interesting conversations. Turns out, lots of little boys want to wear dresses and, for the most part, the parents we chat with try to keep it on the down low. They call it "dress up" and keep it in the house, which is too bad. I think there is no harm at all in letting boys wear dresses in public — in fact, maybe it can nudge our culture away from its gender rigidity.

Research shows that a strict gender education for girls and boys starts at birth. Terrence Real, a family therapist and author of "I Don't Want to Talk About It: Overcoming the Secret Legacy of Male Depression," cites a study in which 204 parents watch a video of an infant crying and are asked to react. When told the baby is a girl, mothers and fathers both say that the child is frightened. When told they are watching a boy infant cry, they label the emotion as anger. The researchers, John and Sandra Cundry, concluded by writing, "It would seem reasonable to assume that a child who is thought to be afraid is held and cuddled more than a child who is thought to be angry."

Little boys who cry are told to "man up." Aggressive and even violent little boy behavior is not corrected or redirected. Little boys' independence and adventuring is praised, while their need for help and support is labeled "girly." Little boys' interest in all forms of violent male archetypes is nurtured and encouraged: cowboys, police officers, pirates, soldiers, superheroes — these men are all armed to the teeth and licensed to kill.

Maybe if we treated more little boys like little girls, boys would not grow up so disconnected from their emotions, so violent and so unable to ask for help. Cuddle your boys. Let them dance around in tutus.

Seamus will say, "I want to wear underpants and a tutu and have a Dar Williams dance party." Then he and his two sisters will flail around to "FM Radio," one of the only danceable songs (on her new album, the song is bookended by slow, beautiful tear jerkers, so we put it on repeat).

He talks about gender and sexuality all the time.

"Mama, look at my long hair," Seamus will say, as he wears a laundry basket on his head, shaking back and forth to feel it on his back. "You are very beautiful," I tell him.

"Mama, I want pigtails," he says when we are in the bathroom and I am putting up my hair. I then put his little tufts of hair into rubber bands too. He smiles at his reflection and then pulls them out. "Not comfortable, mom," he says.

"Mama, I am the mommy and you are the daddy horse. I am nursing my baby horses." Seamus says this as he plays with his big sister's horses on our bed. "You are a really good mom, Seamus," I tell him.

If I were worried about all of this or looking for context or support, I could take to the Internet and find a lot of common cause. There are resources and analysis and communities. There is a great book called "Parenting Beyond Pink and Blue: How To Raise Your Child Free of Gender Stereotypes," written by Christia Spears Brown, a developmental psychologist and professor at University of Kentucky. Brown encourages parents to allow their kids to be "free to flourish" without a lot of gendered expectations and uses a lot of studies (and humor) to back it all up. She is also practical, giving advice on birthday parties, friendships and television. There are clothing-design companies tilting at the pink vs. blue kid-wardrobe windmills that offer attractive, thoughtful, comfy clothes for kids of all sexes and shapes. (Be warned, however: They are pretty pricey, especially for a family of consummate thrifters and hand-me-down acceptors.) There are parents organizing around school dress codes and for safe (and fun) spaces for all kids.

If I had to guess, I would say that I don't think Seamus wants to be a girl. I don't think he will grow up to be a mom. He wants to be a boy with more options. Hey, Jaden Smith — who starred in the reboot of "The Karate Kid" — wore a dress to his prom this spring. Seamus's drawers are full of T-shirts and sweat pants and there just isn't all that much to get excited about in there. His sisters have options — they can wear bright, colorful, bedazzled frocks some days and clothes that are more function than form on other days. Neither of them have to endure society's concern/scorn about their gender confusion.

Seamus sometimes thinks that I used to be a boy, or that he might grow up to be a woman, or that our friends who are women are men and vice versa. He asks a lot of questions about who are boys and girls and men and women. He pays very close attention to what people wear. He knows he is a boy and has started to correct people who mistake him for a girl when he is wearing a dress. He also knows that his daddy is a man. He understands what equipment comes with that designation, but he is also trying on gender roles, exploring sexuality and — in play and in conversation — figuring it all out. He is not the only one.

Vanity Fair's most talked about cover in forever is a portrait of Caitlyn Jenner. But Jenner's hyper-publicized transformation from "living a lie every day" to feeling "finally free" is about more than one person's (very expensive) quest for full-realization. It is an opportunity to talk about the intersections of gender and sexuality (and class and race).

It is a conversation I am only just now learning how to have at 41. As I have it with my son and my daughters, with my husband and our friends and people we meet in the world, I am trying to check my straight (but not narrow), hetero-normative biases. I am trying to give my son more than two choices.