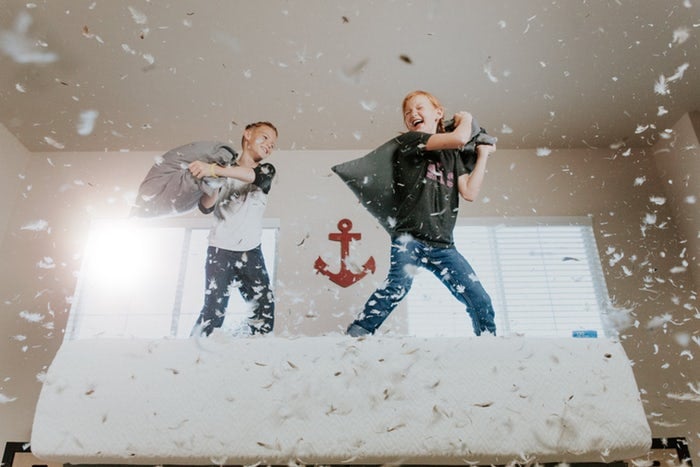 I recently decided that I'm done being my kids' referee. After years of pulling them off each other during heated battles, I'm over it. I'm tired and I've had enough. My children are two years apart, a boy and a girl, and as many families can attest to, this age gap and the differing sexes can serve as the perfect ingredients for sibling rivalry. It's normal. I get that. But that doesn't mean I'm not sick and tired of always showing them how to get along and intermingle peacefully. It's exhausting.

Related:
20 Moments When Having a Sibling Is the Best Thing Ever

No, I'm not going to let them duke it out with punching, kicking, or hair-pulling. Physical violence will never be tolerated in my house. But the arguing? It's just unrealistic to think that my kids will live in constant harmony. While I will still do my best to guide them when it comes to mending their disagreements and be an example for how to treat people, I've started staying out of their fights, just like my parents did with my siblings and I.

When I see my daughter tease her brother by squirting him in the face with the water hose, I'm reminded of my own childhood and how I used to do the exact same things to my brothers. And my parents rarely interfered when we were growing up. Of course we fought — a lot. With four kids under one roof, it was inevitable. My twin brother and I used to torment each other daily, which would drive my mother insane. But unless we laid a finger on one another, she rarely stepped in. And you know what? We always figured it out.

Related:
The Heart-Melting Moment When Siblings Meet For the First Time

We eventually learned that staying out of each other's way, playing nicely together, or apologizing was a hell of a lot more fun than suffocating each other with pillows until the other surrendered. And today, my siblings and I are best friends. We still pick on each other a little, because even as adults, it's fun to get a rise out of each other. But as we've grown, we've just learned not to push those buttons too hard.

My kids are going to grow up to become young adults and they're going to have to learn how to solve problems with their classmates and coworkers when I'm not there. And their teachers or bosses also won't always hold their hands and instruct them on how to behave. They'll be expected to know how to do that themselves. So, for now, I'll continue to guide my children the best that I can. But I'm done refereeing their arguments. No more tattle-tailing to mommy. No more yelling for me to break it up. I'm confident that like my brothers and I did, they'll figure out how to get along (for the most part). And if they're anything like us, they'll eventually stop squirting each other in the face with the water hose.