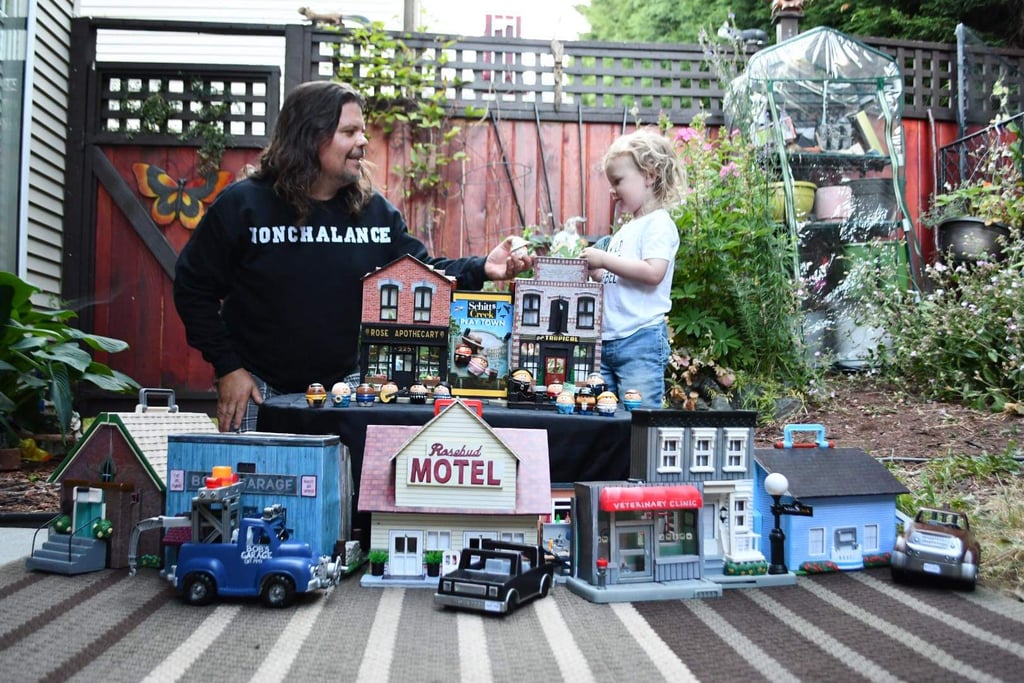 Seeing as Lego devastatingly opted out of producing that adorable Rosebud Motel Lego set idea for the masses, Todd Cameron took matters into his own hands to make Schitt's Creek playtime a reality for himself and his son. The same Canadian dad who went viral for decorating his yard with a David Rose skeleton for Halloween, Todd spent a whopping five months meticulously transforming his vintage Fisher-Price toys into a miniature playtown inspired by the Pop TV sitcom. The setup features replicas of various spots around the fictional town, including Rose Apothecary, Café Tropical, Bob's Garage, Roland and Jocelyn Schitt's house, and even Mutt's barn — plus rotund Little Tikes figures designed to resemble the show's main characters.

Todd told POPSUGAR that he embarked on the project with plans to solely convert an old-school Sesame Street set into the Rose Apothecary and Café Tropical, but it quickly blossomed into something more. "The idea was never to use five months of spare time, but once I start on a project, I keep going until my mind is satisfied with the result," he said. "My process for each building is just to start with getting the basic shape and structure right and then start in on the details, which to me, are my favorites to work on." Some standout details we're loving? The infamously inappropriate town sign, the bus stop bench with Ray Butani's face on it, Moira's colorful wig wall, Jocelyn's cheese ball, Johnny's handwritten signup sheet for using the family car, and the Sarah McLachlan poster in Stevie's apartment. He really didn't miss a thing!

"How very Johnny Rose of me!"

Needless to say, Todd's son got pretty darn psyched while watching his new playtown come to life. "Every day for the past three months, my son would approach me working on a different building or character and say, 'You make for me?'" Todd said. "And I would respond, 'Yes, I am! They just aren't ready yet.' He would always say, 'I'm so excited!'" It sounds like he certainly was upon seeing the end result, which Todd unveiled to him this week in their family's backyard. "[I realized] that I had given the town of Schitt's Creek to my son . . . how very Johnny Rose of me!" he joked. While sharing the end results on Instagram, he wrote, "Years of playtime ahead and many lessons to be learned such as how to fold in the 🧀 and that sometimes men have husbands."

So, you're probably itching to see some photos of Todd's masterpiece by now, huh? Read ahead to admire a handful of before-and-after snapshots, and then scroll through his Twitter thread for even more close-ups. Which detail is your fave?