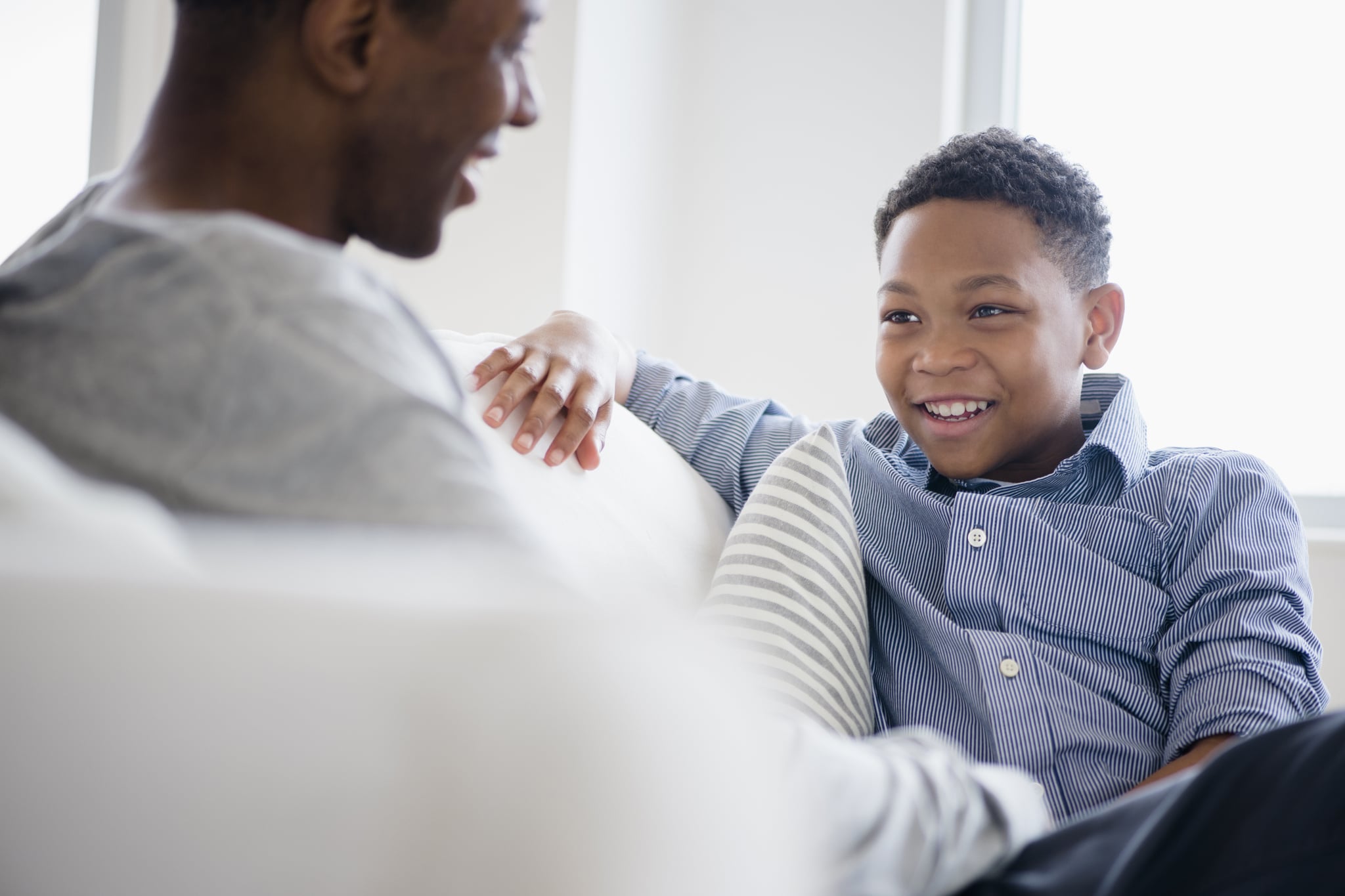 Although many parents have every intention of talking to their kids about gender and preferred pronouns, knowing where to start can be tricky. According to the Mayo Clinic, most children "categorize their own gender by age 3" and "develop the ability to recognize and label stereotypical gender groups, such as girl, woman and feminine, and boy, man and masculine, between ages 18 and 24 months." Because we want our little ones to grow into their authentic selves and respect their peers, parents need to acknowledge the effects that gender norms have on people beginning at a young age.

Read ahead to learn how to broach the subjects of gender and preferred pronouns with your kids, so that they understand the concepts and feel fully supported.

Related:
Reframing Timeouts as Space to Cool Off Helps Your Child Learn to Self-Regulate

How to Talk to Kids About Gender

Kids receive cues regarding gender beginning in infancy, so basic conversations can start around preschool age. "If a kid is 3 years old and they prefer one particular game, activity, or toy [that is specifically marketed to either boys or girls], they are receiving messages from the world that it is associated with a particular gender," Dr. Scott Leibowitz, a pediatric psychiatrist and the medical director of behavioral health for the THRIVE program at Nationwide Children's Hospital, told POPSUGAR. "It's important for parents to be able to see that those kids are receiving those messages and try to create a culture that challenges these rigid stereotypes."

To challenge these stereotypes, parents and caregivers may want to reinforce the notion that inanimate objects don't have a specific gender. "Many things that may have traditionally been limited to one gender or another are not inherently male or female," reads a report from the University of Washington. "We can help children develop an understanding of categories that can include both boys and girls by such simple, straightforward responses as 'toys are toys' and 'clothes are clothes.' These messages can help children learn that any child can, for example, play with any toy or dress up in any kind of clothing."

"Many things that may have traditionally been limited to one gender or another are not inherently male or female."

Your children may begin to ask more complex questions about gender around the age of 6 or 7. Although it may be tempting to give them a quick rundown on the proper terminology — by explaining what it means to be nonbinary, for example — Dr. Leibowitz suggests keeping your explanation simple rather than getting bogged down by the specific terms.

"It's important to say, 'In the world, we have girls, we have boys, and we have people who feel like they're part girl, part boy, or any mixture thereof, and there's no right or wrong way of being that way,'" he explained, adding, "'Sometimes, people feel like they're a girl or a boy, and their body also tells them that. Other times, they [mentally] identity differently than how they look physically, and that's OK.'"

Additionally, the other adults in your children's lives should be on the same page when it comes to discussing gender identity and dismantling ingrained norms. For example, if your child's grandparent tells him dolls are only for girls or that boys shouldn't wear pink, nip that rhetoric in the bud by speaking with the adult in question.

"If parents detect that there are unnecessary, excessive, or potentially harmful influences on how a child is developing, whether that be about gender or any other aspect of identity, then it would be appropriate to address those influences," said Dr. Leibowitz.

Related:
My Toddler Started Sleeping on the Floor, So I Consulted the Experts — Here's What They Said

How to Talk to Kids About Preferred Pronouns

Because kids develop at different rates, Dr. Leibowitz suggests waiting for questions from your child before exploring the topic of pronoun preferences. While parents don't necessarily need to directly ask their toddlers about their genders, they can act as a sounding board for kids when they have questions. They should also keep in mind that studies show that children's thinking becomes "rigid" between ages 5 and 7, meaning that they are "very aware" of rules and gender norms and may start to feel the pressure to comply with them.

"It's always important to normalize the experience of people using pronouns to reflect that the word choice means something about who they are in terms of gender."

"It is important for parents to be in tune with their child's needs according to how they process and react to information in their environments, not according to age," he explained. "Healthy parenting involves balancing when it is appropriate to be proactive and when it is appropriate to be reactive. If a situation arises that creates an opportunity to talk about pronouns, then parents could consider approaching the issue in an open-ended way to see how the child thinks about gender."

In general, Dr. Leibowitz believes that parents know their children better than anyone else. Before discussing topics like gender or pronouns with kids, consider how it might affect their world view and whether they might be sensitive or anxious when learning about change or having their understanding of social norms challenged.

Parents should also emphasize the gravity of taking other people's preferred pronouns seriously, whether they're speaking with a classmate or meeting someone for the first time. "It's always important to normalize the experience of people using pronouns to reflect that the word choice means something about who they are in terms of gender," explained Dr. Leibowitz. To convey this message, parents can begin by saying, "My pronouns are this, and this is what that means for me."

Additionally, telling children how to respond when they accidentally misgender someone is crucial. "Despite our best efforts, we sometimes misgender people. As a culture we are in the habit of assuming pronouns based on appearance," said Erin Cross, the Director of Penn's Lesbian Gay Bisexual Transgender Center, and Amy Hillier, a professor at Penn's School of Social Policy and Practice, in a guide on how to honor students' pronouns in the classroom. "This habit can be hard to break. When you misgender someone, correct yourself, apologize, and move on. You don't need to justify yourself or overly apologize. It's OK. But it's important to challenge yourself to get it right the next time."

Although kids might not have the social awareness to navigate this situation just yet, the same train of thought still applies. Kids should do their very best to use their friend or family member's preferred pronouns correctly. And while mistakes happen, children should correct themselves and apologize in real time.

Related:
This Mom's "Heart Sank" After Her 6-Year-Old Son Made a Drawing of Her Working From Home

If it helps, parents can also use a script to discuss their child's preferred pronouns. Ask, "'Do you have a particular set of pronouns that you feel best matches your gender identity?' Allow them to explain [what] they are and why," suggested Dr. Leibowitz. "It would be healthy if parents conveyed a sense of willingness to communicate about these important topics so that children develop a sense of healthy autonomy about when to bring up issues they are curious about."

Ultimately, being an open book for kids is the best thing you can do. "Parents can say, 'Know that I am here to talk about gender and pronouns any time you feel comfortable. In our family, we bring up issues that are important to talk about and everybody gets to decide what's important for them,'" said Dr. Leibowitz. "By creating this culture of healthy communication, it gives the child the space they might need to raise issues on their own timeline."