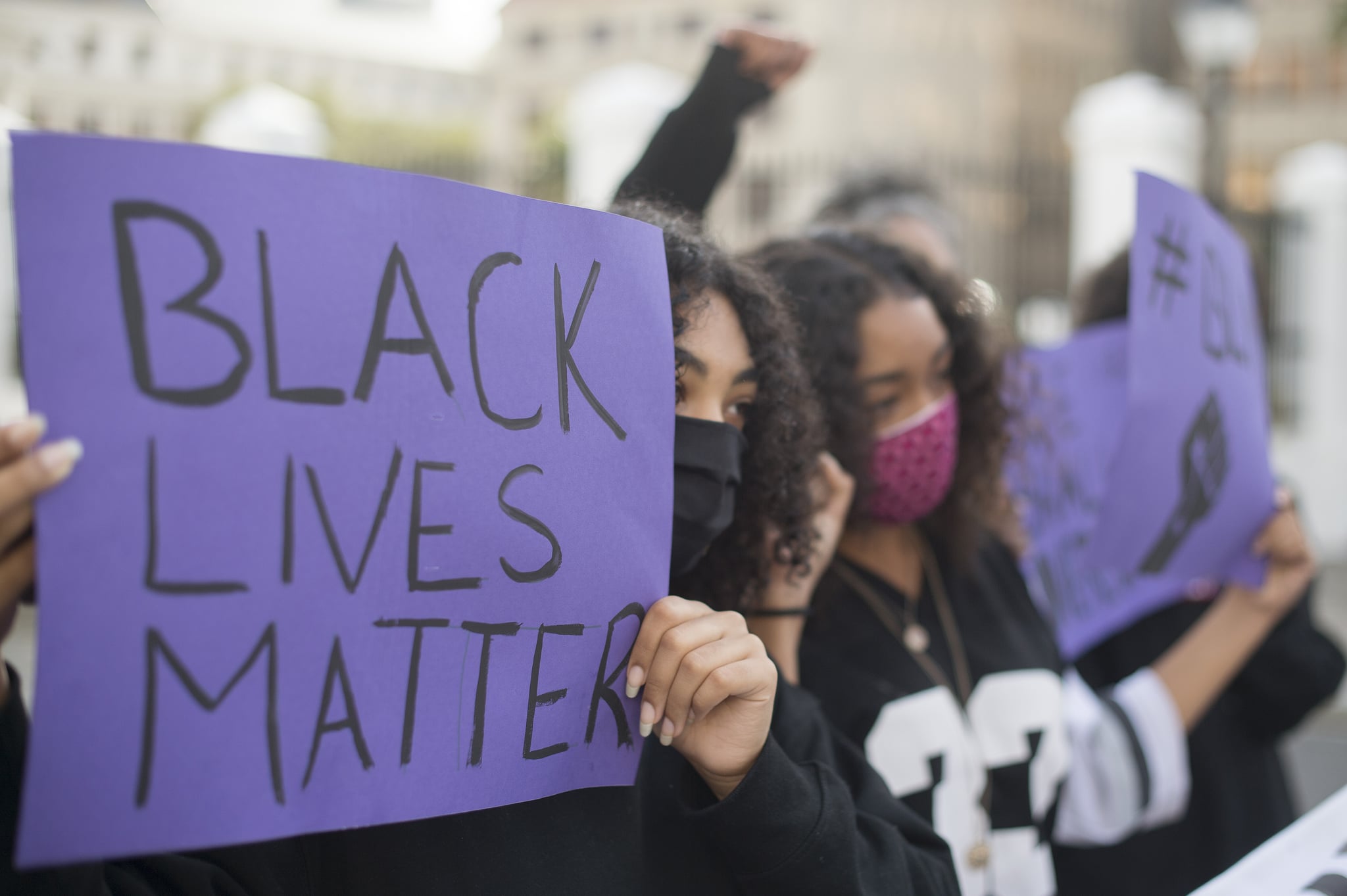 Protests and rebellions erupted in cities across the US this month, and with everyone likely still at home because of the pandemic, there's a good chance your child has overheard you discussing the events, has seen photos of them on your phone's newsfeed, or caught a glimpse of the action on the TV screen. Without any context, those blips can be upsetting and confusing. But how do you explain the Black-led resistance in an age-appropriate way to your kids?

POPSUGAR spoke to experts in both child psychology and Black activism to navigate this balance of a parent's desire to keep their kids safe with the moral imperative to teach them about standing up against injustice.

"What's critical is for parents and teachers to provide children and youth with the vocabulary to make sense of the protests happening across the nation," Kabria Baumgartner — an assistant professor of American studies who wrote In Pursuit of Knowledge: Black Women and Educational Activism in Antebellum America — told POPSUGAR. "We need to define and discuss key terms such as social justice, racial equality, equity, and human rights. And then we need to share examples of what it means to enact social justice and practice equity."

How to Explain the Act of Protesting to Kids

The sheer concept of protesting might be lost on kids, so Reena Patel, an educational psychologist and board-certified behavior analyst, suggests starting closer to home.

"Honest conversations about injustice within our own communities — and families — are necessary. We cannot hide from what we are experiencing and seeing."

"Children at a young age understand by relating to situations they have experienced," Patel told POPSUGAR before giving an example of a script a parent could employ. "When Mommy asks you to clean up your toys, you don't want to because you know your sister is the one who made the mess. You think it's unfair and then you protest and say no and cry, 'it's not fair!' That is a form of peaceful protesting."

As for the adults protesting right now, Patel suggested being direct but general: "Say, 'grownups usually know many people who also feel like the rules aren't fair. If they want to be heard, it's better that all the adults gather in a big crowd and protest together.' You can describe what that looks like in your community, too."

As for Baumgartner, she highly recommends storytelling.

"There are some great children's books about activism such as A is for Activist by Innosanto Nagara and Let The Children March by Monica Clark-Robinson," she said. "To explain my own academic research on school desegregation to my 7-year-old daughter, I had her read Susan Goodman's The First Step: How One Girl Put Segregation on Trial."

"I believe in character education, which is actually taught in some elementary schools," she said. "Essentially, children learn to practice kindness and empathy. They experience the deep satisfaction that comes with helping and supporting others to bring about social change. That is activism."

How to Safely Involve Your Kids in Protests

Although Patel recommends keeping little ones at home during the current protests, mainly because of the health risks associated with limited social distancing, she does understand that some children — particularly those in grade school and beyond — may ask to participate in a local march or gathering. To that end, she suggests finding family-friendly demonstrations taking place in your neighborhood. Some communities have even simply shared a time in which participants can go in their front or backyards and make noise in solidarity.

For those hoping to attend a major protest, Baumgartner suggests starting with behind-the-scenes help. "Children and youth can help parents design posters that call for justice and peace," she said.

For older kids, Patel asks that they find a protest run by an official organization, like Black Lives Matter, and express what their goals are in participating. "Check for understanding by asking your child what they expect and why they believe they are participating in the event. Watch a peaceful protest video, and have a discussion afterward. Discuss pros and cons with your child. What are the benefits of joining this protest? Why do they feel so strongly about joining? What possible consequences might they face?"

And for parents planning to take part in protests with their young children, Patel advises they first make sure the child feels comfortable being in large groups.

"You do not want to create anxiety or extra worries," she said, noting the particularly stressful factors that the coronavirus adds.

How to Address Fears About the More Powerful Uprisings Taking Place

First, Patel cautions against giving explicit details on the circumstances that served as a catalyst for the recent protests — namely George Floyd's death and the police officer who killed him — with young children, particularly those under four years old. This may consume them with fear and leave them unable to grasp the overall concepts you are trying to teach.

Still, it may be harder to shelter them from the ongoing protests. Among the more intense protests taking place, the footage of chaotic crowds, buildings aflame, and sirens blaring would be understandably frightening to a child. And for those who live in cities and neighborhoods that are the epicenter for these uprisings, the solution is not as simple as turning off the TV. They may see firsthand glass-shattered storefronts or hear helicopters hovering overhead. Compounding those anxieties, parents might also be confused as to how to calm their child's fears while not necessarily condemning the protests that have caused those fears to take root.

"Children learn to practice kindness and empathy. They experience the deep satisfaction that comes with helping and supporting others to bring about social change. That is activism."

Patel said the keys are validation and relatability.

"Validate by using 'I see' and 'I hear' and 'I feel you are scared,'" she said. "'It's OK to be scared. Sometimes grownups put their fists in the air. Others hold signs and shout. Some get loud to make sure their voices are heard. Just like when you are calling for Mommy and I don't hear you. You might scream my name.'"

She also suggested telling them that all emotions — including anger and frustration — are acceptable, that "peaceful protests are a positive way to express those feelings," and that people are gathering because "it shows that they are united — not because they plan to hurt someone."

If age-appropriate, she suggested talking about safety measures your community has in place and the ones you have in your own home in case of emergency.

Parents who want to educate their children on the reasoning behind even the most potent forms of resistance, Baumgartner reminds parents to think back to how we've been taught about historic "riots" and rebellions, and not just the civil rights movement.

"How do we teach children about the American Revolution and the founding of our nation?" she asked. "Usually teachers at the upper elementary level frame it a process: the coming of the American Revolution and the war itself. Teachers ask students to consider what angered colonists and how colonists protested. Violence is discussed, at a level appropriate for children. My point is that we can use those exact teaching strategies to discuss ongoing nationwide protests now. Children and youth ought to learn about past and current racial injustices, particularly involving state-sanctioned violence against African Americans, that has provoked peaceful and, at times, violent protests, which we are seeing today."

Related:
Organizations to Donate To in Support of Racial Justice

How to Encourage Activism in Kids

In-person protesting may be one of the most prominent forms of activism, but it's not the only way, especially for kids. Patel said it could be writing a letter to a local government official or emailing their teacher.

"One way to balance keeping kids safe with the goal of raising them to fight for change is to teach them the importance of being civically engaged, reading widely, and serving their communities," Baumgartner said. "Depending on a child's interest, a parent can find a local or community organization that shares that interest, and both parent and child can participate. That is one effective way to stand up to injustice and fight for change. Also, honest conversations and continued critical dialogue about injustice within our own communities — and families — are necessary. We cannot hide from what we are experiencing and seeing."

by Taylor Andrews 30 minutes ago