Justin and Hailey Bieber tied the knot in 2018 (and again in 2019!), so (whether you agree with the chain of questioning or not) it's no surprise that fans and the media are curious: do they want to start a family? Both Justin and Hailey have been open about the love they have for each other, and when it comes to adding a brood of mini Biebers to the mix, it's definitely something they both see happening.

In a February interview with POPSUGAR, Hailey shared that while the tattoo she has of her parents' wedding date is her most meaningful, she's saving room on her body for ink dedicated to her future children. "There are so many more [tattoos] I know I want to do in life," she said. "Right now, I'm saving space to get something that has to do with my kids in the future." 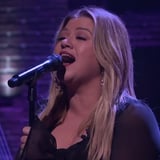 In an interview with Apple Music's Zane Lowe, Justin was asked his thoughts on starting a family, as there's a baby cooing at the end of the song "All Around Me" on his new record, Changes. "I want to start my own family in due time," he said. "I want to enjoy being married for a little bit, go on tour, be married, enjoy traveling with just us, build more of our relationship. And I think, yeah, that is definitely the next step for sure."

Then, on Ellen DeGeneres's "Burning Questions" segment on March 3, Justin touched on the number of little ones he and Hailey might want. When Ellen asked the "Yummy" singer for a number, he displayed his feminist side. "I think it's up to Hailey, because it's her body," he replied.

Justin doubled down on the couple's stance when he spoke with Ellen again in December. In the interview, he explained that while he planned to save space on his back for tattoos that honor his future children, they're still in no rush to have kids. "I'm going to have as many [children] as Hailey is willing to push out," Justin said. "I'd love to have myself a little tribe. But yeah, it's her body and whatever she wants to do."

He also mentioned that while Hailey wants to eventually have a "few" little ones, she still has a lot on her to-do list. "I think Hailey still has some things she wants to accomplish as a woman and I think she just is not ready yet, and I think that's OK," he said.

Looks like both Hailey and Justin are definitely toying with the idea of kiddos, but with no concrete answers from them yet, we'll just have to wait and see what happens!