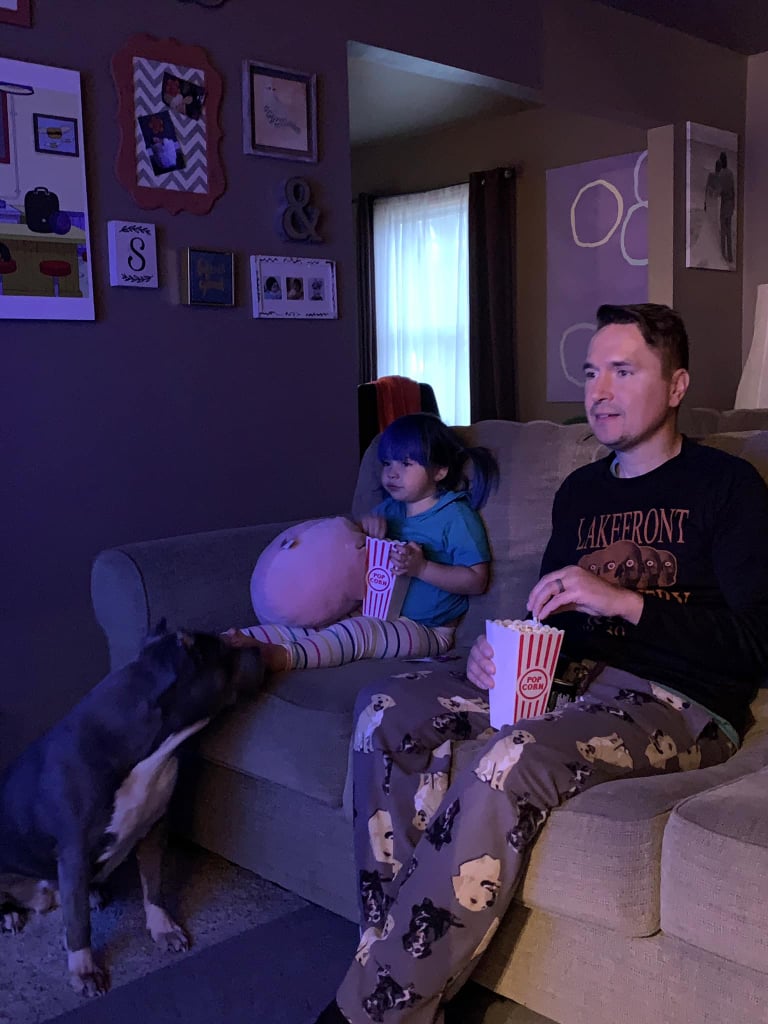 When Olivia Schaber's daughter Rae asked her if their family could go to the movies, she had to break it to her that theaters still aren't open and that they aren't allowed to go out right now. Instead of letting that explanation be the end of it, however, Oliva decided to transform the living room into a full-on movie theater with tickets, "sold out" showtimes, popcorn, and all.

The family ended up "going to see" Lilo & Stitch, since no one had seen it yet, but Rae had originally wanted to see Frozen 2 — again. "She LOVES going to the movies so when I told her we'd turn our living room into a theater, the first thing she said was, 'Yay, let's watch Frozen 2 again!'" Olivia told POPSUGAR. "I. Can't. Take. Any. More. When I told her what the only option was because Frozen 2 was sold out, she said, 'Oh, bummer,' and we all lived happily ever after." Ha!

Related:
You Can Still Stream These Disney Movies on Netflix

And rather than hand out tickets and treats for free, everyone had to "pay for" their ticket in hugs and earn their snacks by reciting the alphabet, counting, and spelling. "She LOVED 'paying' for her concessions and even shushed Darryl and I for talking," Olivia said. "She had an absolute blast and has asked for us to do it again. Drawing up a few signs, moving the couch, and covering the windows was worth the smile and joy it brought to her face. For those two hours, nothing outside our house mattered."

Keep scrolling to see the photos from the family's adorable at-home movie theater experience and steal some of Olivia's ideas for your family's next movie night.

Florence Pugh
Florence Pugh Thanks the Cast and Crew of "Don't Worry Darling": "Your Dedication and Love Was Seen Daily"
by Sabienna Bowman 4 minutes ago