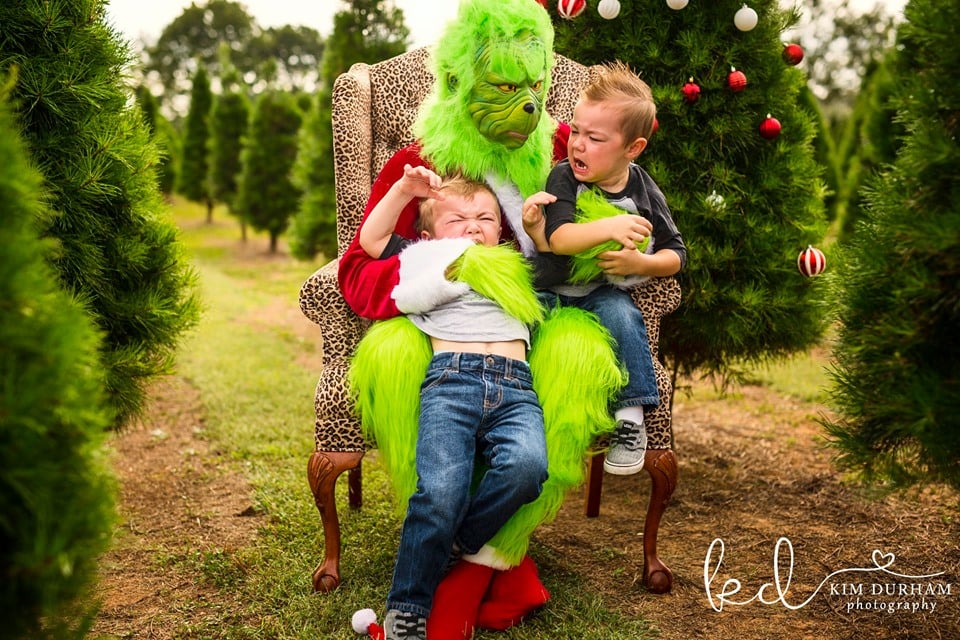 Back when I was a little kid over 20 years ago, I remember my mom "surprising me" with a stuffed Grinch after my holiday recital. As soon as she presented me with my new toy, I immediately went berserk and demanded that my dad sleep on the couch to protect my gifts from my new green foe. Looking back, I find it absolutely hysterical. And thankfully, this kind of humor isn't lost upon the latest generation of parents. Kim Durham — the owner of KD Photography based out of Gravette, AR — has recently started doing Grinch-themed photo shoots, and boy, are they a f*cking hit among parents.

While Kim says she wasn't the first person to think of the idea, she was inspired while doing housework one day. "A few months ago I was watching How the Grinch Stole Christmas while folding laundry and it reminded me of something similar I saw last Winter," Kim told POPSUGAR. After throwing together a costume, Kim got to work shooting, charging families $85 per session.

The idea instantly took off for the holiday season. By the end of September, Kim was completely booked through most of the Winter. In fact, a couple is traveling from as far as California to have their children's photo done. And while there are some unhappy faces, Kim assures parents that it's all in good fun. "Our Grinch doesn't always cause the tears — we have kisses, hugs, and little baby snuggles, too!" she wrote in a Facebook post. "Don't be alarmed, the kids in this photo aren't traumatized! They high-fived, hugged, and gave our Grinch fist bumps at the end. The parents are close by!"

Scroll ahead to get a look at these hysterical photos that will surely get you in a premature holiday spirit.