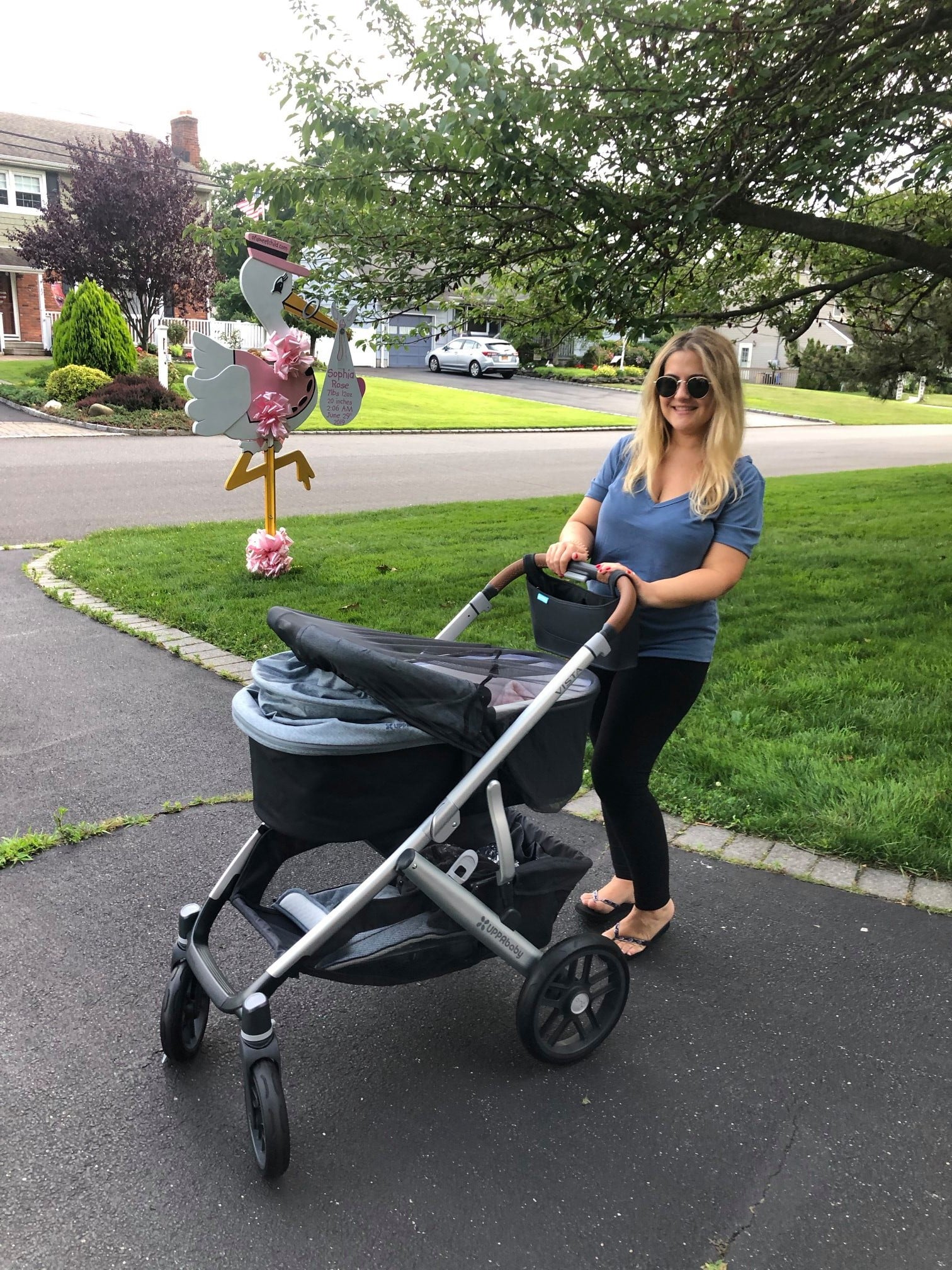 When I first found out I was pregnant a year ago, a million thoughts ran through my mind. Among them was this: "I'm going to gain so much weight."

I want to be clear: I was also ecstatic, excited, terrified, and slightly in shock that I was growing a teensy-tiny human being inside of me. I was newly married and my husband and I were ready for a baby. But I was also incredibly scared of what was going to happen to my body. I think of myself as a body-positive person, so this took me especially by surprise. I never thought women should feel any certain way about their weight, yet here I was, stressing endlessly about mine. But it wasn't just the impending weight gain that was bound to happen, but all of the little things I had heard about pregnancy as well: Were my feet going to get bigger? Were my facial features going to change? Was my hair seriously going to fall out? I had no idea what to expect, and it was scary for me.

In the early months of being pregnant, I admitted to other women that I was nervous about the inevitable changes, thinking maybe they could relate and I would feel less alone. While a few did admit that they struggled with their bodies after giving birth, most of what I heard made me feel silly for voicing my concerns. A lot of people said things like, "What? Why are you worried about weight gain? You're pregnant, what did you think would happen?" Many said, "You'll forget all about that when you have the baby. It won't even matter."

Related:
I Never Lost the Baby Weight, and Honestly, I Don't Care What Anyone Says About That

After a while, I started to think they were right. Maybe I was just being self-absorbed and vain, and when I became a mother, everything would fall into place and I would be OK with the extra pounds, the hair loss, and the aches and pains that follow childbirth. I started to think that that should happen, that when I gave birth, I should feel so grateful for my child that I wouldn't think about myself at all. For a little, things were like that: in the days after giving birth, I was so consumed with love and happiness that it overtook everything else. I didn't give much thought to the fact that I was more swollen than I ever had been before, I ignored my puffy face, I embraced loose sweatpants, and I dealt with the pain. Holding my daughter and looking into her eyes was all that mattered to me.

But as the rose-colored new-mommy-and-child bubble began to fade away, I started to pay more attention to what was going on with my body. My stomach seemed pouchy and loose and impossible to conceal. I felt like my hips had doubled in size. I thought that my face looked wider and rounder. Yes, I had lost some of the baby weight right away, like many women do, but I still had to lose quite a bit more to get back to where I had been before my daughter was born.

On top of all of that, I was in more pain than I had ever been in before, and was finding the simple tasks of sitting, laughing, and walking to be nearly impossible. My hormones were in a place they had never been before, and I was crying over everything. In short, I didn't feel like myself at all . . . and I hated it.

I waited for the feelings many had told me about to enter my head. I waited to feel grateful for my body, for its ability to create human life, to make a tiny, perfect, healthy baby girl when some women can't. I waited for a feeling of nonchalance about my weight, for my mind to realize I had better and more important things to focus on now with my daughter. For a while, those feelings didn't come. Instead, I was just focused on my weight and what people were thinking about me every time they saw me. And I felt, and still feel, incredibly guilty for being so self-absorbed.

Related:
The Breastfeeding Lie: How Nursing Made Me Gain Weight

As my hormones began to calm down, and the crying fits over nothing stopped, I started to feel a little bit better. Really, though, the turning point for me was when I deleted a few photos of my daughter and me because I didn't like how I looked in them. In the midst of deleting, I paused and reminded myself that I could never get those moments back because she wouldn't be a baby forever — and that I was deleting them just because I didn't like how I looked. I felt instant regret. In that moment, I made a promise to myself. It wasn't that I was going to work hard to lose the weight or start a diet right then and there. It was that I was going to be kinder to myself about my body and all of the changes that it had gone through, no matter what it took.

Things certainly haven't been perfect since that revelation. I didn't go from hating my postpartum body to embracing the extra pounds in a matter of hours. But I did start to feel better. I spent a lot of time reminding myself that I wanted my daughter to grow up in a positive environment where she could learn to love herself no matter what. I opened up to my husband and found that talking honestly to him made me feel less alone, even if he couldn't relate. I also started working out, but without the mindset of "I want to lose weight." Instead, I did it to feel more powerful, get more energy, and get some time to myself. Without the pressure of weight loss on my back, exercise made me feel great.

While I'm still not happy with everything about my body, I'm getting there. I still constantly feel guilty for how much I'm putting myself through mentally, and I also feel like a hypocrite for wanting my daughter to feel confident in herself in the future when I can barely manage to feel that way about myself right now. But I'm trying my hardest, and at least I can feel good about that.