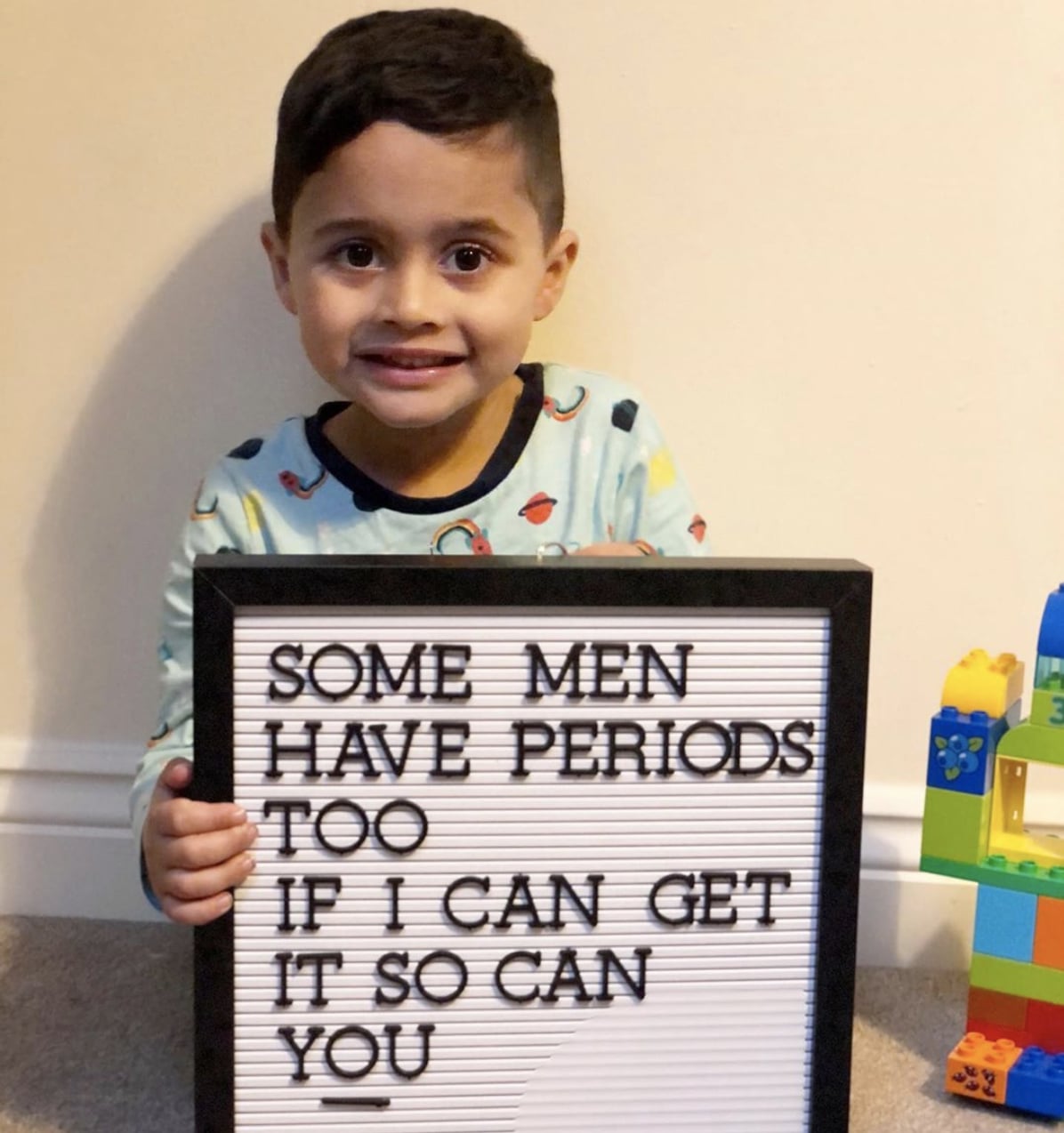 Milly Bhaskara's 4-year-old son, Eli, first learned about mensuration when he noticed his mom leaked through her pants. While answering Eli's questions about periods recently, she was careful to use inclusive language, rather than simply chalking it up as something women go through. In a now-viral Instagram photo, Eli can be seen holding a sign that reads: "Some men have periods, too. If I can get it so can you." In the caption, Milly explained why she's teaching her son that women aren't the only ones who menstruate.

"Eli has been told about periods since he saw blood on my pants a couple of years ago," she captioned the photo. "I didn't use the language of women have periods because it's not entirely inclusive."

And she's right. In October, Procter & Gamble removed the feminine symbol from Always menstrual pads in an effort to be more inclusive. "For over 35 years Always has championed girls and women, and we will continue to do so," a Procter & Gamble spokesperson told The New York Times. "We're also committed to diversity and inclusion and are on a continual journey to understand the needs of all of our consumers."

"It's opening up the community to make it a safe space for those who don't identify as women but still have periods."

As a body-positive mom and mental health advocate, Milly is encouraging others to be a little more open-minded. After all, if her young son can wrap his head around the fact that not just women get their periods, shouldn't full-on adults be able to accept it? "I told him that SOME women, SOME non-binary people and SOME men have periods," she said. "It was easy for him to accept as he hadn't had to unlearn the ingrained societal norm. But if a 4-year-old can grasp it I'm sure most of us can have a crack at unlearning transphobic/misinformed norms and open our minds."

Related:
I'm a Trans Guy, and These Are the Questions People Always Ask Me

She continued, agreeing that removing an unnecessary feminine symbol from the packaging was the right move. "Trans men may have 'female' sex organs and still experience periods and some non-binary people have periods, too," she said. "Therefore, removing a female logo from the front of sanitary products helps include us all. Isn't that wholesome and a nice gesture?"

Despite getting some backlash online, Milly stands by her decision to teach Eli the power of inclusivity. "Why in the name of Lizzo should that affect ANY of us . . . it's not insulting to women, it's not discrediting women, it's opening up the community to make it a safe space for those who don't identify as women but still have periods," she explained. "Stop being an asshat. Grasp it."