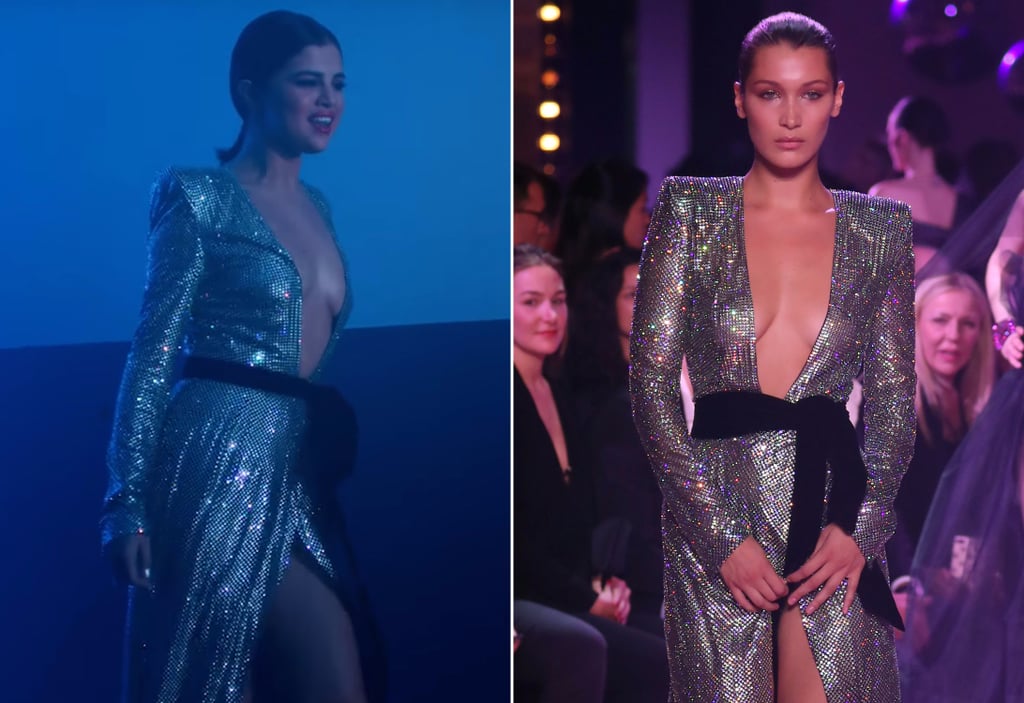 Selena Gomez and Bella Hadid have a lot more in common than we thought, and this time, it's not because of their similar dating history. Earlier this week, Selena released the full music video for her new song "Wolves" with Marshmellow, and although the lyrics had fans wondering if she was singing about her then-ex-boyfriend Justin Bieber, there's another clue in the video that directly points to Bella Hadid, the former girlfriend of Selena's former boyfriend The Weeknd. No, we're not talking about characters from The Young and the Restless; we're talking about the real-life soap opera that is the celebrity dating world.

In the video, Selena wore a plunging silver Alexandre Vauthier gown, one of six ensembles, and thanks to the Instagram account selenascloset, we realized why this outfit looked so familiar. Back in July during Paris Fashion Week, Bella took to the Alexandre Vauthier Haute Couture Fall/Winter 2017 runway wearing the exact same gorgeous dress. Bella may have seemingly struggled to prevent a wardrobe malfunction on the runway, but she pulled it off like the catwalk queen she is. Could Selena's music video outfit choice be a slight nudge at Bella? We'll let you be the judge of that! Read on to see Bella and Selena in the shining silver gown, and shop similar styles ahead.

Billy Porter
Billy Porter Asked Fans to Re-Create His Met Gala Outfit, and the Outcome Is Spectacular
by Nikita Ramsinghani 1 day ago

Music
Welp, This "Lose You to Love Me" and "Falling" Mashup Is the Saddest Song We've Ever Heard
by Kelsey Garcia 2 days ago