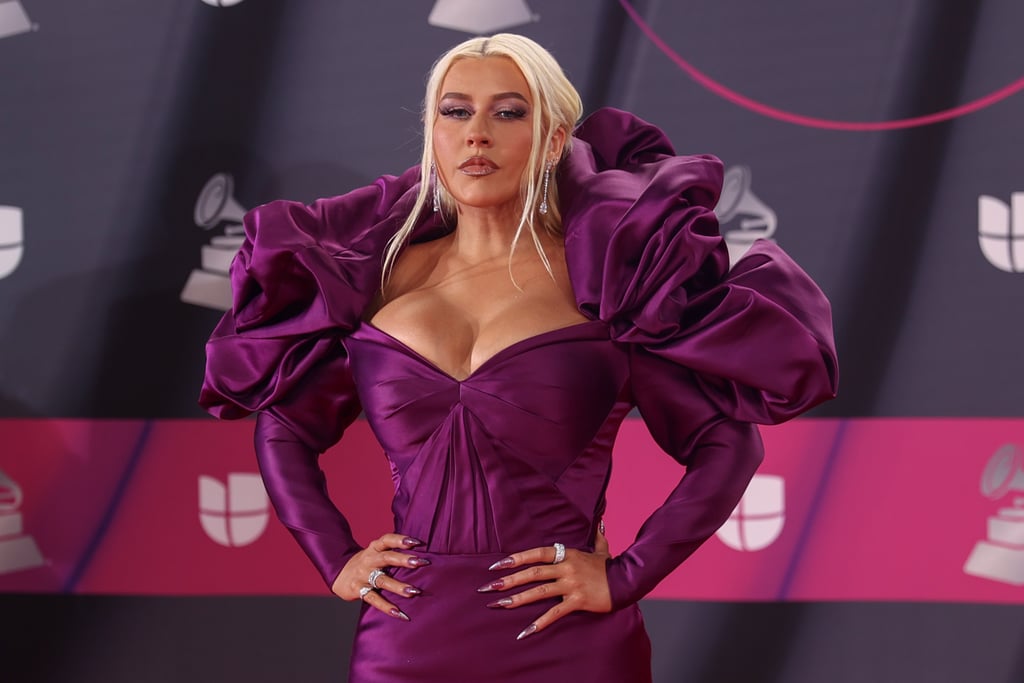 Christina Aguilera came to the 2022 Latin Grammy Awards looking like modern-day royalty. The multihyphenate wore a perfectly tailored long-sleeve gown in a striking shade of magenta, custom designed by Zac Posen. The luxurious satin look also included voluminous wrap-around detailing that unfolded from behind her head all the way out to her elbows. Her look was complete with a small train and flattering deep-V neckline, which Aguilera matched with lilac eyeshadow, an exquisite purple manicure, and her trademark platinum blond hair swept out of her face.

The Nov. 17 ceremony is a big one for Aguilera, who once described her 2001 Latin Grammy award as "one of my most valued possessions" in a November 2021 interview with Entertainment Tonight. This year, not only is she set to perform during the show, but she is also nominated in a total of seven categories, including album of the year for her second Spanish-language album, "Aguilera." In terms of nominations, she comes second only to Bad Bunny, who has 10 Latin Grammy nominations, and tonight she's here to celebrate.

An exciting night calls for a major look, and Aguilera delivered. Beyond that, Aguilera looked confident and proud on the red carpet — a concept she's spoken about at length in relation to her Latinidad. Throughout her career, Aguilera was told she wasn't "Latino/a/x enough" due to the way she speaks and presents, even encouraged to change her last name at a certain point. But Aguilera is proud of her Latinx heritage, and "Aguilera" is proof that Aguilera is proud of where she comes from. Showing up to the event dressed like a queen is just the cherry on top. Check out photos of Aguilera at the 2022 Latin Grammy Awards ahead, and see why she was majestic in magenta.