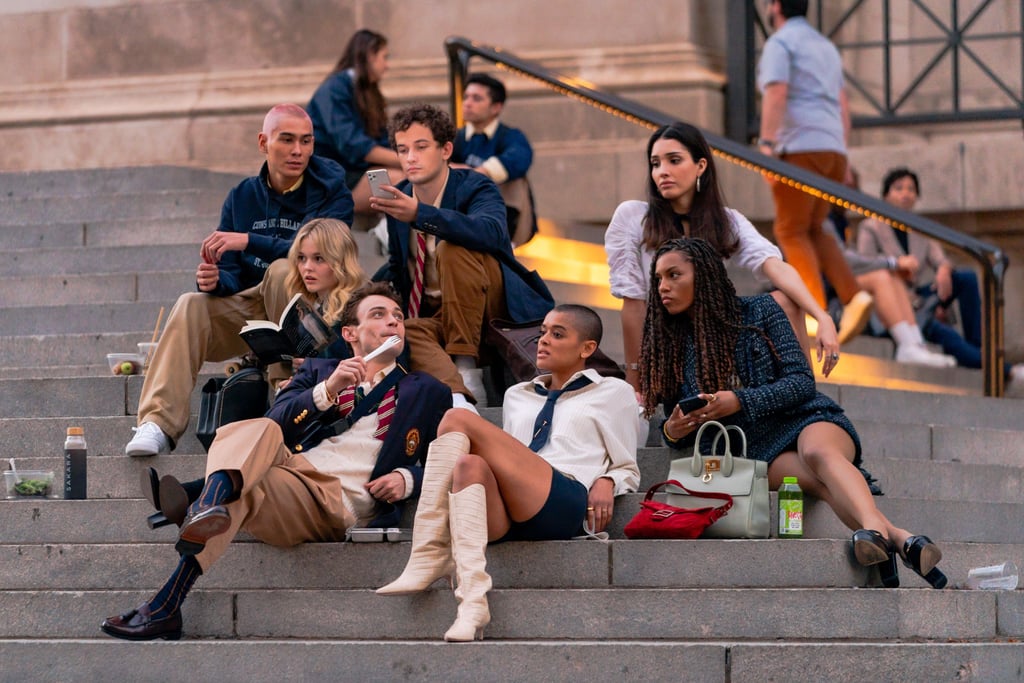 A new crew of Upper East Siders are here, and they're taking their rightful spots on the iconic Met steps. After production was put on hold due to the coronavirus pandemic, HBO Max's Gossip Girl reboot started filming this week in NYC — and thanks to behind-the-scenes shots of the cast on set, we caught a glimpse of the next generation of Manhattan's elite and their perfectly preppy outfits. The new cast, which includes actors Jordan Alexander, Emily Alyn Lind, Whitney Peak, Thomas Doherty, and Zion Moreno, were photographed filming on Nov. 10 on the steps of the Metropolitan Museum of Art, where original Gossip Girl characters Blair Waldorf, Serena van der Woodsen, and their minions often spent their days.

Judging by the first-look photos, it appears the wardrobe of Gossip Girl 2.0 is heavily inspired by the original, but with a 2020 update. This comes as no surprise, as creative genius behind the looks of the original series, costume designer Eric Daman, has returned for the spinoff. While there may be no headbands in sight, the Constance Billard and St. Jude's uniforms — and the loose ties, smart blazers, and tweed — are all too familiar for OG fans. On another day of filming, on Nov. 8, cast members Alexander, Moreno, and Savannah Lee Smith were seen in glam evening gowns that certainly remind us of the dramatic galas and epic parties from the CW show.

While it's been over a decade since Gossip Girl first aired, Blair and Serena's style continues to influence our fashion choices today, so it's safe to say we expect some serious inspiration from the reboot as well. Take a closer look at the new crop of Upper East Siders' chic looks ahead.