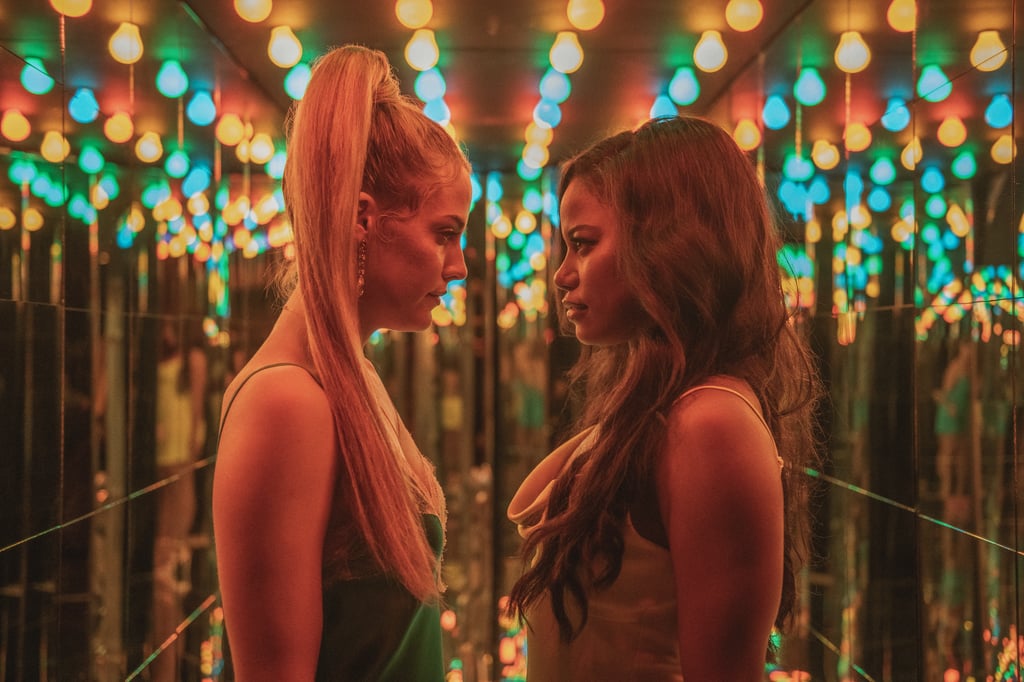 Where were you on Oct. 27, 2015? If you happened to be on Twitter, chances are you caught wind of @_zolarmoon's now-iconic 148-tweet thread. It started off with a bang: "Y'all wanna hear a story about why me & this b*tch here fell out?" Many watched with bated breath as the author, Aziah King, fired off missive after missive about stripping, sex work, murder, and attempted suicide. Even Missy Elliott, Solange Knowles, and Ava DuVernay got in on the conversation.

Fast-forward six years later, the epic tale has finally been made into a feature film, directed by Janicza Bravo and cowritten by playwright Jeremy O. Harris. The movie packs all the drama of King's narrative and adds the visual splendor — it's a candy-colored nightmare, and the featured players, Zola (Taylour Paige) and Stefani (Riley Keough), are dressed to kill. Colman Domingo stars as Stefani's pimp, and Nicholas Braun plays her pseudo-boyfriend with a penchant for True Religion jeans and chain necklaces.

Here, Bravo, a former stylist and costume designer, talks to POPSUGAR about the making of the film, early-aughts fashion, and pasties.

POPSUGAR: How did you first get involved with the Zola story?

Janicza Bravo: I tried to throw my name in the proverbial hat when the thread went viral, but by that point, there were bidders, and I was not a bidder — I was a stylist by day and a director by night; I had no cash to offer. I don't even think my name ever arrived at the proverbial hat. Then, a couple years later, I found out that the script was available and the director [James Franco] was stepping down, so I made a reach for it. I spent three months auditioning for it — inviting producers into what was visually speaking to me and what I thought the world might feel like or sound like aesthetically — then I got it.

JB: I treated it like a period piece. The top-line reference is Hieronymus Bosch's "The Garden of Earthly Delights." The piece is at the Prado museum, and it's a triptych: panel one is heaven, panel two is Earth, and panel three is hell. That piece really influenced our energy. Other than that, I looked to photographers: Deana Lawson, Philip-Lorca DiCorcia, and there's an Argentinian photographer who is on Instagram under the name @suffer_rosa. They helped me build my bible of images.

PS: The film takes place in 2015. Where did you source the clothes?

JB: For Taylour, we wanted to homage Dorothy in The Wizard of Oz, because we're a similar story — I think you could call us "Ratchet Wizard of Oz." To reinvent Dorothy in this world, we put her in a gingham outfit that she wears for 75 percent of the movie. The whole film has a patina on it that's very girl-like, dreamy, and sweet — it feels like candy. I imbued Riley with pink so that she felt the most baby-like, because I felt the audience was going to sympathize with her inherently because she is a white woman. There were these Adam Selman pants with pink flamingos on them that were really hot in 2015 that I wouldn't stop talking about — I talked about them so much that our crew's phones were getting ads for them on Instagram. I was also really high on Bode that year, and we were really fortunate to have them lend out the piece that Colman [Domingo] wore in the third act of the film. Some of his early pieces were from Zara; Riley's first look, when you meet her in the restaurant, is full Dior.

PS: Tell us about the finale outfits — the snakeskin and sequin two-piece sets.

JB: For me, the greatest compliment would be if I see girls dress like the movie on Halloween. Then I will know that I've made it. I hope it's Taylour in her gingham outfit and Riley in the pink flamingo pants, but there are so many good outfits — there's also the assless shorts; the snakeskin look and the disco-ball look are a nice pair together. That sums up my whole approach to costume design — when I think about costume design, I am thinking of designing the world.

"When I think about costume design, I am thinking of designing the world."

PS: The dancer costumes in the strip-club scene are fantastic, too. How did you create those looks? And where on earth did you find the pasties?

JB: [Laughs] I don't remember where the pasties were purchased from, but I do know that there were, like, 50 to choose from. I also don't know where the dancing pieces were sourced from, but Taylour and myself were very much in community when arriving at those pieces.

PS: We need to ask about Nicholas Braun's True Religion jeans. They are very emblematic of that point in time.

JB: [Laughs] Absolutely. His whole vibe was "this looks like it was purchased at Ross Dress For Less or Marshalls." Maybe it's Macy's, but I don't know that he's with it enough to go to Macy's. Nick wanted a silver chain, too — I lean gold, but he thought silver was better for his character.

PS: Do you have a favorite look from the film?

JB: The suit that Riley wears was found by me late-night shopping on ASOS. We'd had a couple of pink suits, and I didn't love any of the ones that we had. We made it like a mini trampy suit, because I was speaking to that era of young Hollywood girls ending up in court but wearing the wrong outfit. It felt like a great way to homage that moment — you saw it with Lindsay Lohan, Paris Hilton, even Naomi Campbell . . . like, is that the right outfit?

JB: Aziah did not have input on the costumes, but she had input on how she was represented and what she felt the world was speaking to. Every design and gesture in the movie is authored by me, through and through. There is not any aspect of the film that exists without me having put my fingers on it. It's deeply in my DNA.

Read on to see some of our favorite stills from Zola, in theaters now, and to watch the trailer.