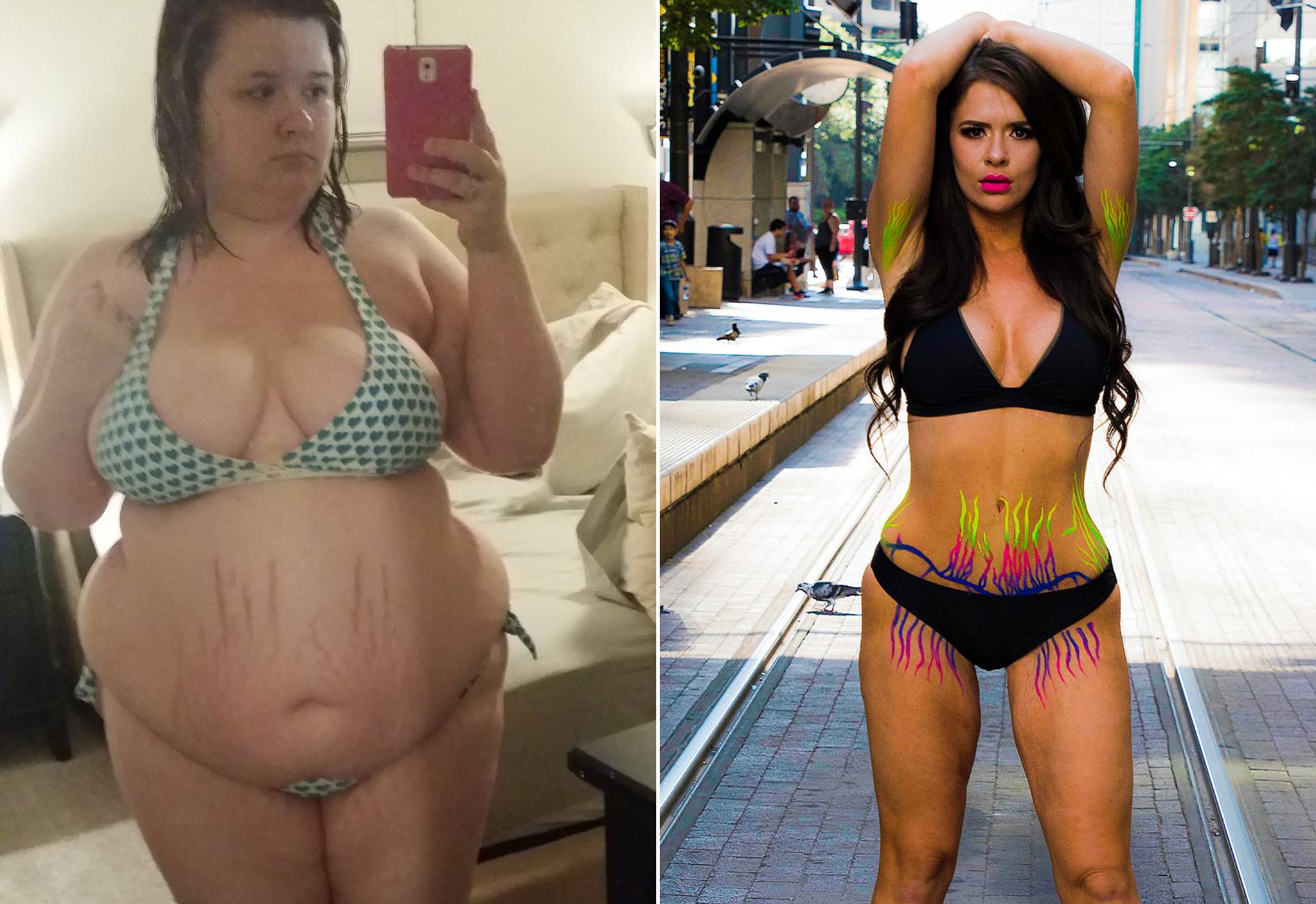 Christine Carter was once 275 pounds, and her life changed forever when she decided to undergo gastric bypass surgery. Don't worry, she already knows what you're thinking about her transformation — maybe judging her because she's had surgery. But everyone's story is different, and that's OK. You can read more about Christine's 175-pound weight-loss journey here, but three years after embarking on this full-blown life change, she's opening up about finally learning to love her past and the marks it's left on her body. Yeah, we're talking about stretch marks, people. Everyone has them, even incredibly fit people — and Christine decided to embrace hers in the most colorful way possible.

The Dallas-based woman, who goes by weightlosshero on Instagram and has more than 219,000 followers, often posts about her stretch marks on social media. So when she saw the story about a Barcelona artist who paints rainbow lines on stretch marks, she was instantly inspired. "It made me want to paint MY scars and walk the streets of Downtown Dallas wearing them proudly," Christine told POPSUGAR. So that's what she did, and it inspired her to start a movement she calls #LoveYourMarks.

"I decided I was going to fall in love with every single mark on my body because it tells my tale of strength, power, and determination."

While taking the streets, Christine immediately had heads turning. Sure, people were wondering why someone would be without clothes and covered in rainbow paint in the middle of the day, but they also wanted to hear her story. "Lots of hugs and support," she told us. "We even had a DART train driver stop and lean out of the train wanting to know my story. She couldn't believe that I had lost 175 pounds." 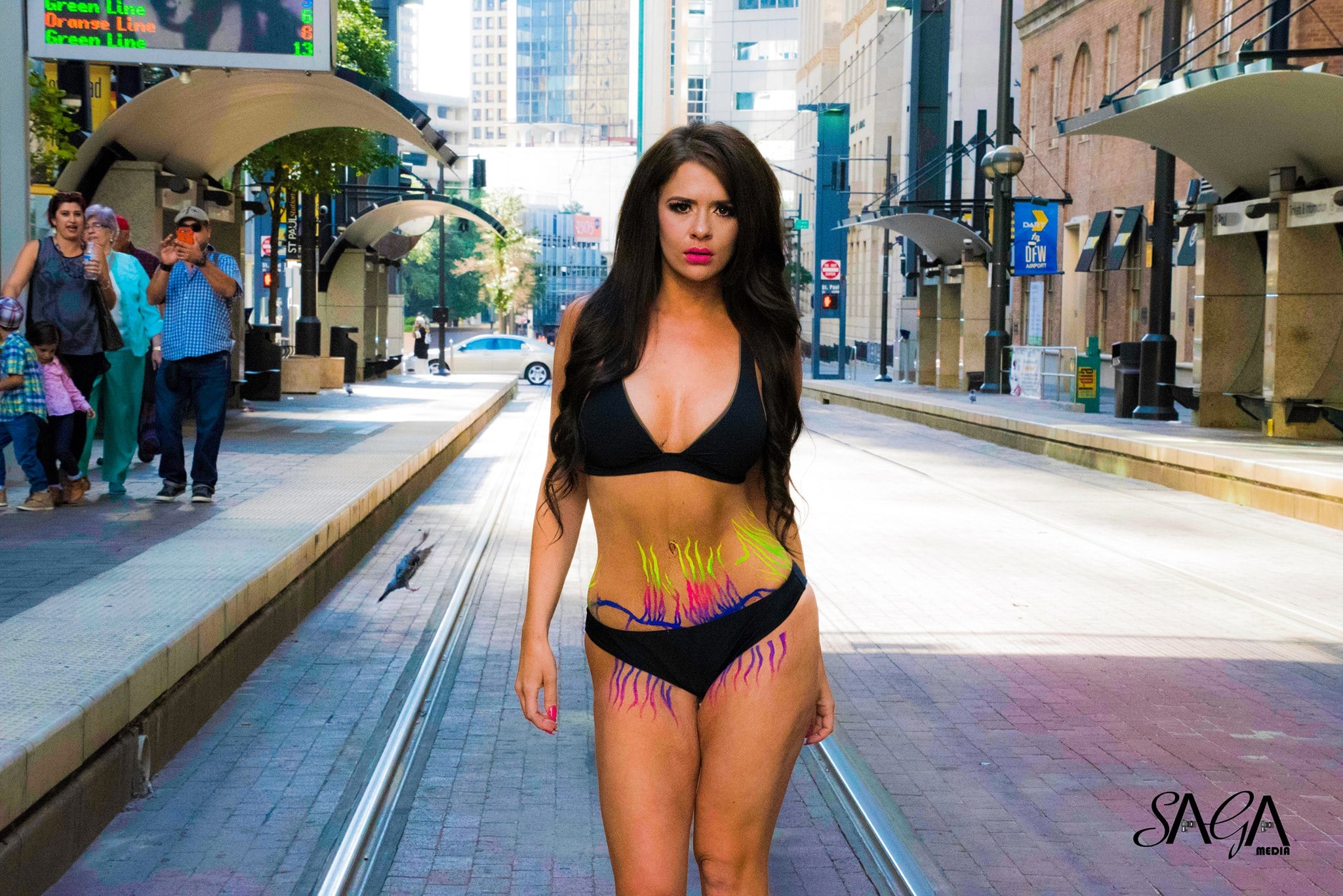 But even after losing weight, Christine wasn't overflowing with confidence, and she definitely wasn't proudly drawing attention to her stretch marks and scars. It took a while for Christine to learn to embrace these marks, but it all began after one conversation with her trainer.

"About halfway through my weight loss, I went through a divorce and found myself single again, terrified to approach the dating scene after five years," she shared. "One day I went to my trainer, Justin Blevins, and told him, 'But what if men won't like my body? I have all these stretch marks and will eventually have a huge tummy tuck scar spanning across my tummy!' And he looked at me and said, 'You know what? I like scars. I think they are beautiful because they tell your powerful story.'" 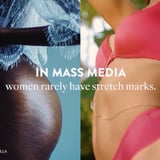 You've Never Seen Stretch Marks in the Media Like This

"You can still be strong, confident, and beautiful, despite your marks."

Christine continued, "It was that day that I decided I was going to fall in love with every single mark on my body because it tells my tale of strength, power, and determination. It took some time, but I can honestly say I have embraced them all. I actually like my big tummy tuck scar! I worked hard for this!"

Hell yeah she did, and that's why she wants others to embrace their marks with her #LoveYourMarks movement. "My advice is to own it," she told POPSUGAR. "We all have scars, and they [make] us beautifully unique."

She hopes to dispel the stigma and negativity surrounding stretch marks and scars because she knows how it feels. "After my 175-pound weight loss, I was left covered in stretch marks — I'm like a zebra!" Christine said. "They have faded, but they are there and can be seen easily." She said that before she lost all the weight, she feared the scars and the potential of not being able to love her body because of them. So, that's why she had an artist cover them in rainbow paint, "to show women that you can still be strong, confident, and beautiful, despite your marks."