A recent dairy backlash is causing a stir. SELF investigates who, if anyone, should be giving it up. 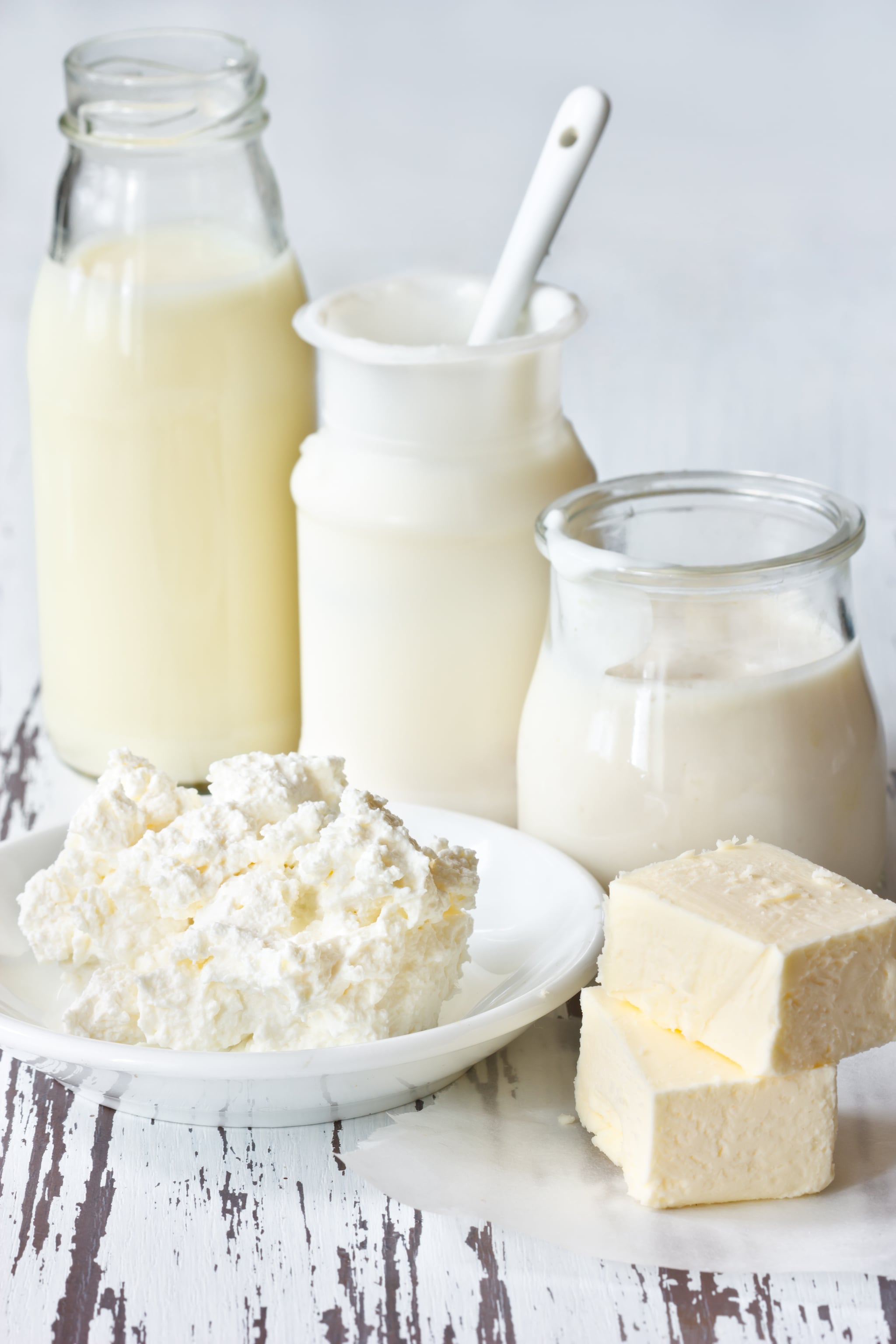 An ice-cold glass of milk was once the beverage equivalent of comfort food: wholesome, quintessentially American. It paired perfectly with cookies and completed a healthy breakfast. These were facts that you probably didn't question as a kid. I know I didn't, coming of age in the "Got Milk?" era, when 300 celebrities (from Salma Hayek to Kate Moss) wore milk mustaches to remind us how important it was to drink up.

Today, I eat Greek yogurt for breakfast and gulp organic (full-fat!) chocolate milk after working out. My husband got me a fancy cheese grater last Christmas because I firmly believe that everything tastes better with parmesan. But I find myself among an ever-shrinking minority of dairy-loving Americans. More and more of my friends are giving up cheese because they say it messes with their skin or their stomach, or switching to raw milk because they swear it clears up their allergies. Celebs like Alicia Silverstone and Megan Fox — who have espoused vegan or Paleo diets — trumpet the supposed evils of dairy. Since 1978, Americans' milk intake has dropped from nearly a cup per day to a little more than half; 54 percent of us no longer drink it daily at all. But what facts justify this widespread milk mutiny? "It can be difficult to wade through the information and know which sources to trust," says Lisa Sasson, R.D., a clinical associate professor of nutrition at New York University. So I dove into the research to sort through the myths and hype on both sides of the dairy divide.

What You've Heard: "Milk is the best source of calcium."

A serving of nonfat milk provides 30 percent of our RDA of calcium, according to the National Institutes of Health. The NIH advises women ages 19 to 50 to consume 1,000 milligrams per day—nearly impossible without dairy. (Women under 30, who are still actively building bone, are most in need of calcium.) But the World Health Organization suggests just 400 to 500 mg of calcium per day for all adults, or roughly the amount you'll get if your meals include kale, beans and two packets of instant oatmeal (without milk). Tofu, broccoli, sardines, almonds and calcium-fortified orange juice are additional sources. "If you're eating a nutrient-rich diet, you'll get calcium through lots of foods," Sasson says. (As for bone health: Leafy greens and weight-bearing exercises help, too.)

It's worth noting that the USDA not only oversees American dietary guidelines but also promotes the sale of American agricultural products—including dairy, explains David Katz, M.D., director of the Yale-Griffin Prevention Research Center in Derby, Connecticut. Some experts believe the USDA-recommended three daily servings of dairy may actually be too much. Walter Willett, M.D., chairman of the nutrition department at the Harvard School of Public Health in Boston, says that "preventing bone fractures has always been the primary justification for drinking milk." But when his team reviewed six studies of almost 200,000 women, they found no relationship between drinking milk and lower rates of fractures. And a study of 60,000 Swedish women found those who drank 21 daily ounces or more had a 60 percent higher risk of hip fracture (possibly due to a milk sugar that may have a weakening effect on bones).

What You've Heard: You need milk for vitamin D."

Vitamin D—critical for calcium absorption and bone health and thought to be helpful in mood and weight regulation—is added by manufacturers to every cup of milk, as well as to some cheese and yogurt. That's because few foods contain vitamin D naturally; nondairy sources are limited to egg yolks, beef liver, fatty fish, fortified OJ and some cereals. (The sun is another source, but exposure increases your risk for skin cancer and premature aging.) Still, it's not clear that more D—beyond the 600 IU per day recommended by the NIH—is always better. Healthy adults who took vitamin D supplements didn't see any significant improvement in bone mineral density, according to a 2014 meta-analysis. Still, if you avoid dairy, talk to your doctor about the right D levels for you.

The protein in milk (8 grams, or 17 percent of the RDA for women) is said to be key for rebuilding muscle fibers frayed during workouts, while the sugar in chocolate milk replenishes fuel stores. I found a dozen studies validating these claims—and then noticed that about half of them were funded by the National Dairy Council. While non-industry-affiliated experts I talked to were wary of possible conflicts of interest in some chocolate milk research, they didn't dispute that it's important to replace fluids and glycogen stores after a hard workout. Research also supports the value of protein for muscle recovery. Yet chocolate milk is high in calories, and recovery fuel may not be necessary after less intense workouts. "If you eat a balanced diet, your body has what it needs," says Dr. Katz.

It's true that 65 percent of adults develop some level of lactose intolerance as they age, according to the National Library of Medicine (among Asians, the rate is closer to 90 percent). "We're all born with an enzyme that allows us to digest our mother's milk during infancy, but lots of us lose that enzyme, to some degree, as we age," explains Steve Taylor, Ph.D., codirector of the Food Allergy Research & Resource Program at the University of Nebraska. Many of our ancestors didn't drink milk past childhood, so there was no evolutionary advantage to being able to digest it. If you guzzled milk as a kid but now notice bloating or GI distress within a few hours of drinking it, ask your doctor to test you for lactose intolerance. But don't rush to give up Brie just yet: Most lactose-intolerant people can comfortably handle dairy in moderation, according to Taylor. Yogurt with live active cultures has bacteria that predigest lactose, and cheese manufacturers occasionally remove the lactose-laden whey for easier digestibility. (Some people still have problems with tiny amounts of dairy, but they're rare.)

True milk and dairy allergies, of course, are serious, causing symptoms from hives to vomiting to anaphylactic shock. But they affect less than 1 percent of adults, according to Food Allergy Research & Education, an advocacy nonprofit.

Americans drink 58 percent less whole milk than we did in 1978, thanks to our national fat phobia. Saturated fat became public enemy number one after scientists concluded it increased our risk for heart disease, not to mention diabetes, strokes and cancer. The dairy industry dutifully loaded grocery stores with lowfat and fat-free milk, cheese, yogurt and ice cream. Unfortunately, the lowfat-diet craze backfired. "We cut fat but replaced it with refined sugars," explains Dr. Willett, whose research (published in the British Medical Journal in 1996) shows that lowfat dieters did not reduce their risk for heart disease. Sasson, for her part, recommends small amounts of full-fat dairy in place of lots of lowfat dairy and high-sugar, low-nutrient foods, since fat will at least make you feel full.

What You've Heard: "It could even cause cancer."

Studies have suggested that dairy consumption contributes to our country's high rates of breast, ovarian and prostate cancer. Some experts are wary of the growth hormones used on factory farms to boost milk production; others suspect milk's natural sugars and saturated fat. But the science is far from definitive. (Dr. Katz says it's "murky at best.") On top of that, "I could find as many studies that say dairy helps prevent cancer," Sasson says.

So where does this leave health-conscious dairy devotees like me? Nothing I've learned has persuaded me to quit, full stop. Dr. Willett has shown that eating yogurt may even correlate with a lower risk for type 2 diabetes. And cheese and ice cream give my life joy. I have learned that dairy products aren't superfoods, fortifying my bones into steel. But I'm skeptical that they're wreaking havoc on my health. They're just foods with a complicated backstory, probably best consumed in moderation—like just about everything else we eat.

Healthy Eating Tips
10 High-Fiber Snacks to Keep You Full For, Like, Ever
by Courtney Leiva 2 days ago