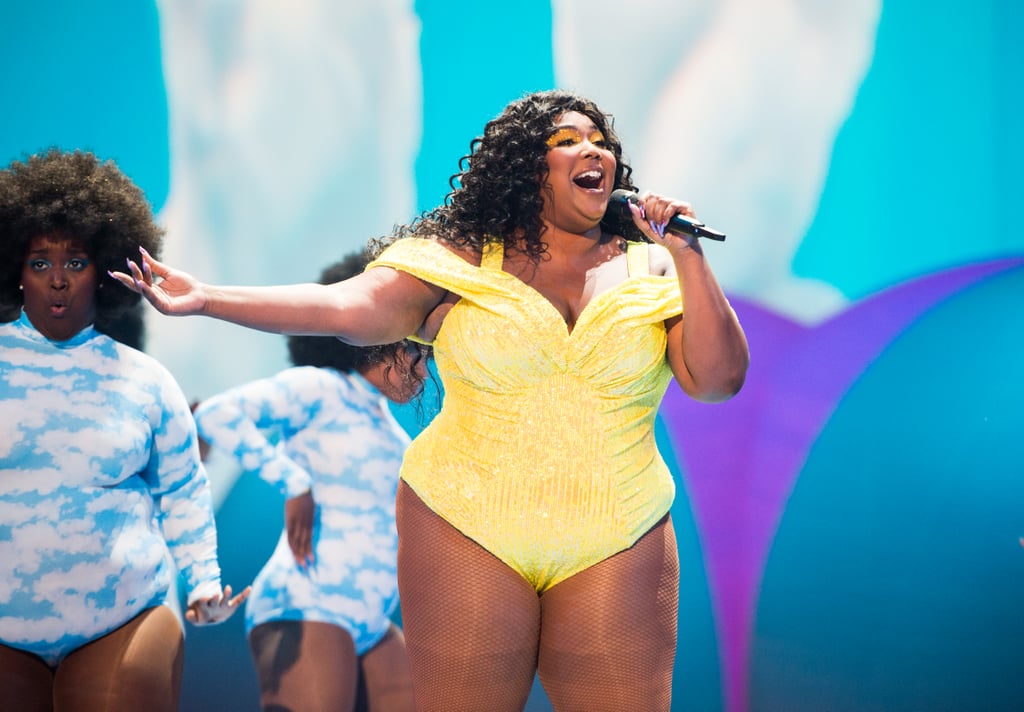 When Lizzo opened her performance at the 2019 MTV VMAs with a giant inflatable butt across the entire stage, the crowd went wild. Her empowering songs and self-assured attitude are what makes her impact so powerful, but Lizzo doesn't want to be considered "brave" for radiating such levels of confidence; it's just who she is. In a new interview with Glamour, Lizzo spoke about how frustrating it is for society to admire her confidence, as if it's not expected of her because she's a fuller-figured woman.

"When people look at my body and be like, 'Oh my God, she's so brave,' it's like, 'No I'm not,'" Lizzo said. "I'm just fine. I'm just me. I'm just sexy. If you saw Anne Hathaway in a bikini on a billboard, you wouldn't call her brave. I just think there's a double standard when it comes to women."

"I don't like it when people think it's hard for me to see myself as beautiful."

Following her show-stopping VMAs performance, Lizzo shared a message on Instagram about how much it meant to her having a group of black women standing behind her on stage. "Every woman on that stage had a story of either why they shouldn't have been on that stage or why they didn't believe they deserved to be on that stage, including myself," she wrote. "Not only were we taught to believe we didn't belong in the spotlight, but when we finally get to a place to self-worth the world tries to knock us down. Not this time. The world smiled with us. The world sang us. The world saw our beauty last night. The world saw black women feeling Good As Hell and cheered us on . . . Being a big black woman with y'all by my side is the honor of my life, and I hope this moment stays forever between yo titties."

Lizzo is unapologetically herself, and her lyrics are helping others feel that same self-love she radiates. She said that the internet really helped her "find the beauty" in herself after seeing other beautiful people online who look like her. "You'll find yourself reflected," she said.

As for the future, Lizzo just hopes that no one's confidence is ever considered "surprising." Confidence comes from within, and Lizzo's powerful lyrics and honest attitude are helping others feel that same way. "Let's just make space for these women," she said. "Make space for me. Make space for this generation of artists who are really fearless in self-love. They're out here. They want to be free. I think allowing that space to be made is really what's going to shift the narrative in the future. Let's stop talking about it and make more space for people who are about it."

Jane Fonda
Jane Fonda Reflects on Her Past Eating Disorder: "It's a Very Lonely Thing"
by Chandler Plante 22 hours ago

by Emily Weaver 19 minutes ago