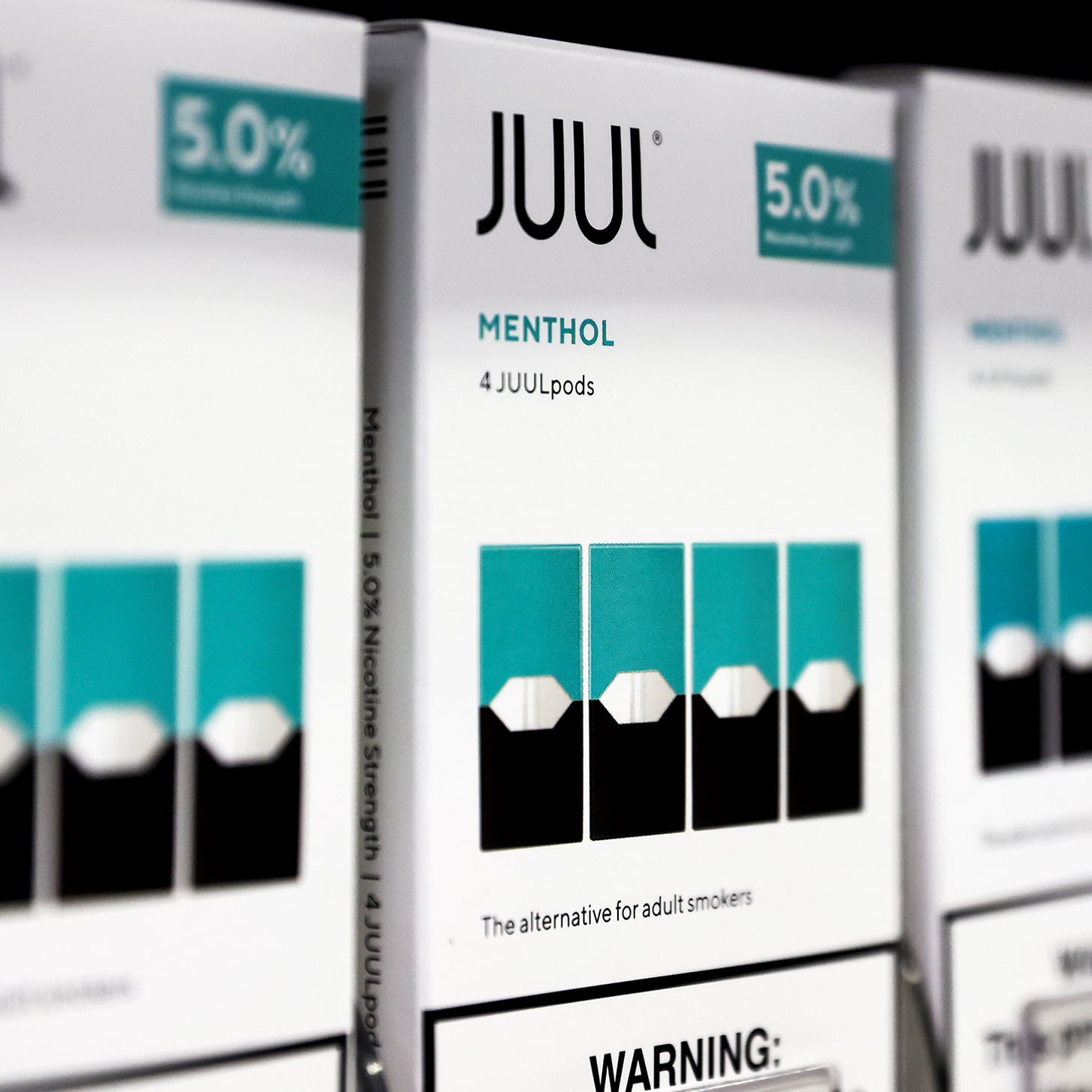 On September 6, Juul agreed to pay $438.5 million to settle a two-year investigation into its marketing practices, jointly conducted by 33 states. As part of the settlement, the e-cigarette company will stop marketing practices that the investigation noted as targeting youth, including funding education programs in schools and advertising on social media. Connecticut Attorney General William Tong called out the company for engaging in "predatory marketing," per the Wall Street Journal.

This news comes as vaping, aka smoking e-cigarettes, has skyrocketed in popularity over the last few years, especially among teenagers, for whom e-cigarettes are illegal. And while overall tobacco-use numbers are down for teenagers in the US, e-cigarette smoking continues to be the most popular tobacco product among the age group, according to the Centers For Disease Control and Prevention (CDC). (Though e-cigarettes don't contain tobacco, they're still referred to as "tobacco products.") That popularity has led the US Food and Drug Administration (FDA) to crack down on all e-cigarette products, but especially the ultrapopular Juul, which attracted teens in particular with its sweet flavors, easily inhaled vapor, and savvy marketing campaigns.

In fact, the FDA ordered Juul to stop selling e-cigarettes on June 23, though it suspended the order less than two weeks later. For context, the FDA's original statement issued "marketing denial orders (MDOs) to JUUL Labs Inc. for all of their [Juul] products currently marketed in the United States," and also added that "those currently on the U.S. market must be removed, or risk enforcement action."

On July 5, however, the FDA announced that the ban would be suspended. "The agency has determined that there are scientific issues unique to the JUUL application that warrant additional review," the administration stated on Twitter. "This administrative stay temporarily suspends the marketing denial order during the additional review but does not rescind it." The FDA further explained that the suspension of the order "does not constitute authorization to market, sell, or ship JUUL products."

So what exactly made Juul so popular on the first place? Simply put, it's "just cool," says Stanton Glantz, PhD, medical professor and director of the UCSF Center For Tobacco Research Control and Education, who has published several studies on the effects of e-cigarettes. "It looks like a flash drive. It's very high tech and fun." E-cigarettes also don't look like cigarettes, which means they don't typically come with the same negative stigma.

The market around Juul and other e-cigarettes are sure to change as new FDA bans and the recent Juul lawsuit fall into place. But before we get into that, let's talk about why vaping, especially among minors, has become such a concern in the first place.

Vaping is the same thing as smoking an e-cigarette. (You can also vape cannabis, but we'll be focusing on the tobacco product for this article.) The name gives you a clue as to how it works. Regular cigarettes burn tobacco, creating a smoke that the user inhales. E-cigarettes, on the other hand, don't burn anything. The technology consists of a "tiny toaster coil," as Dr. Glantz describes it, wrapped around a wick (similar to a candle wick). That apparatus is soaked in a liquid, "usually propylene glycol, vegetable glycerin, flavorants, and nicotine," Dr. Glantz says. By inhaling, you heat the coil around the saturated wick. That creates a vapor of ultrafine particles, including nicotine, that you breathe into your lungs.

Is Vaping Bad For You?

The hope for e-cigarettes was that, by breathing in vapor instead of tobacco smoke, you wouldn't be exposed to the same toxic, cancer-causing substances that are generated by burning tobacco. And to some degree, Dr. Glantz tells POPSUGAR, that's true. In a range of studies measuring toxic chemicals in cigarette smoke, "the levels are much lower in an e-cigarette than a cigarette," he explains. "So that's the good news."

The bad news? The vapor and the particles you inhale from e-cigarettes are dangerous in and of themselves, Dr. Glantz says, causing damage to your arteries, lungs, and heart. "In terms of heart-disease risk and lung-disease risk, based on what we know so far, e-cigarettes are almost as bad as cigarettes."

The research, which predominately focuses on teenagers, supports the fact that vaping does indeed pose health risks. A 2017 study showed that high schoolers who vape are more likely to experience symptoms of chronic bronchitis, which include shortness of breath and coughing up mucus. Research done in South Korea in 2016 found a correlation between vaping and symptoms of asthma. A 2020 study also found that young people who vape are more likely to contract COVID-19, and celebrities like Doja Cat have even publicly sworn off vaping due to its health effects.

Studies on the long-term effects of vaping, including any association with cancer risk, will by definition take more time. But the cardiovascular risks are being seen even now, Dr. Glantz tells POPSUGAR. In fact, he says, vascular consequences from vaping "occur within a few puffs."

The consensus is that e-cigarettes aren't as bad as cigarettes, but that doesn't make them "good" for you or a healthy product to use. The overall effect of vaping "is to increase risks and make the tobacco epidemic worse," Dr. Glantz says.

Related:
Why a One-A-Day Habit Is Just as Bad as Smoking a Full Pack

One more difference between smoking and vaping, with Juul in particular: the nicotine content. Nicotine is a highly addictive chemical compound that comes from tobacco plants but is also used in e-cigarettes, including Juul, according to the FDA. The nicotine aerosol that you breathe in from cigarettes "is pretty alkaline, so it's hard to inhale," Dr. Glantz explains. It triggers a gag reflex which makes you cough and choke when you're not used to it. Juul products, on the other hand, contain an altered form of nicotine that's more neutral and less alkaline, making it easier to inhale. Previously, Juul would also flavor their products to make them sweet and further mask the bitterness of the chemicals. (In 2020, the FDA banned e-cigarette companies from selling sweet and minty flavors that appealed to minors; however, companies found loopholes that allowed them to continue selling flavored products up until recently.)

The easy-on-the-throat inhales, and previously, the tasty flavors, made it possible for e-cigarettes "to deliver a much higher dose of nicotine per puff than in a conventional cigarette," Dr. Glantz tells POPSUGAR. "And that means you could get addicted a lot faster."

Starting to vape as a teenager not only runs the risk of creating an addiction, but also multiplies the likelihood that a cigarette habit will follow. A February 2019 study published in JAMA Network Open confirmed this, showing that kids who used e-cigarettes were four times more likely to try a regular cigarette than those who'd never vaped.

Not yet. The FDA ordered Juul to stop selling e-cigarettes on June 23 but has since placed a stay on that order, which allows the company to keep its products on the market.

The brand had already halted selling its fruity flavors in 2019 (ahead of the FDA ban on such products) and cut back on its ad campaigns that appeared to target young people, seeing its sales drop as a result. It was seeking authorization to sell its tobacco- and menthol-flavored products in the US. (Tobacco-flavored products from other e-cigarette companies, such as Reynolds American Inc. and NJOY Holdings Inc., have been authorized for sale, and in 2021, the Vuse Solo became the first e-cigarette authorized by the FDA.)

After issuing the administrative stay, the FDA will continue to review the company's application to stay on the market. It had initially ruled that Juul provided "insufficient evidence to assess the potential toxicological risks of using the JUUL products." That being said, the ban (if made official) will apply only to the commercial distribution, importation, and retail sale of these products. "The FDA cannot and will not enforce against individual consumer possession or use of JUUL products or any other tobacco products," per the FDA original statement. But regulators still feel a ban is a step in the right direction.

It's clear that restrictions do have an impact. Since sweet- and mint-flavored e-cigarettes were taken off the market and the legal age to buy e-cigarettes was raised to 21, underage vaping has decreased in the US. According to the 2021 National Youth Tobacco Survey, 11.3 percent of high school students said they currently vape, over eight percent lower than in 2020 and a steep decline from the 27.5 percent who said they vaped in 2019.

Plus, the recent Juul settlement has incited hope among lawmakers that e-cigarette usage will be curbed among youth. "They're not going to target young people and children, and that's a huge step forward," Tong said. 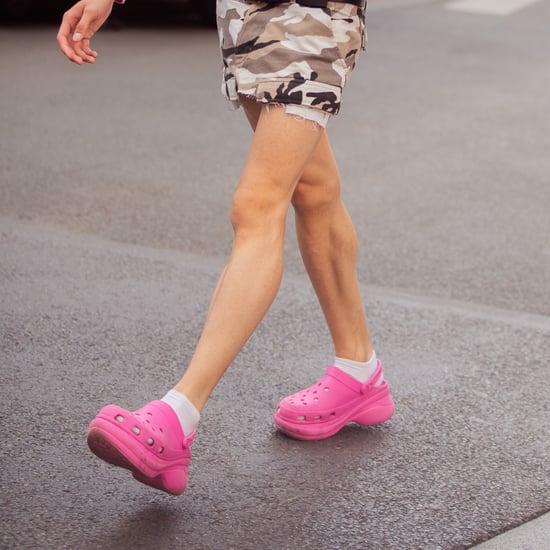