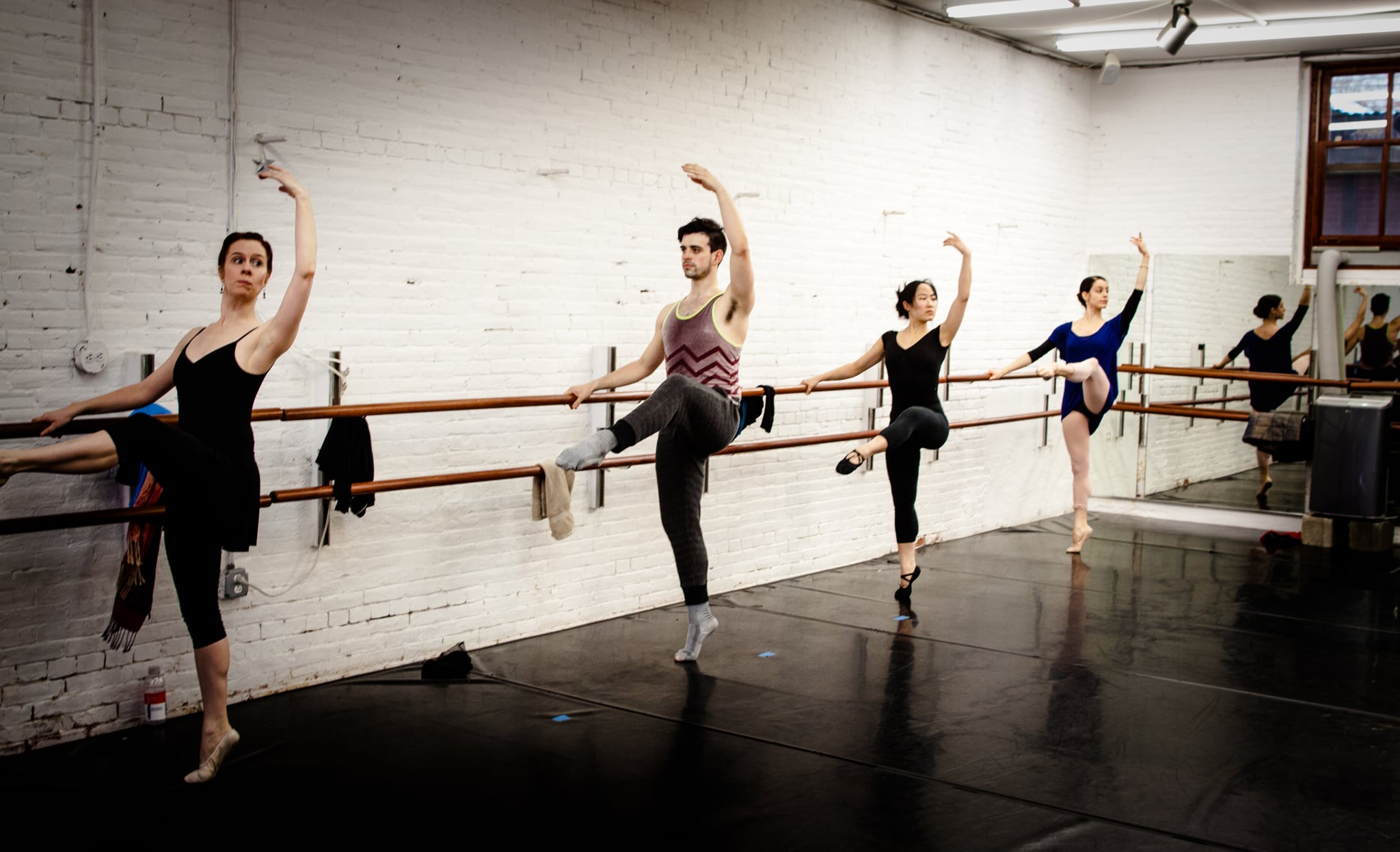 I'm going to shoot straight with everyone: I drank too much wine on Super Bowl Sunday, downloaded ClassPass, and agreed to attend my first-ever barre class with my best friend. Did I wake up regretting this decision in the morning? One hundred percent, yes. But I have a job, and duty calls, so off I went to work, clad in my best workout gear.

I'm not going to lie: as a 25-year-old former college lacrosse player, never in my lifetime would I have agreed to this on a normal day. To be honest, I like my workouts how I like my margaritas: outside in nice weather with no men in sight. I've always favored cardio-heavy workouts that allow me to pick my own music and totally lose myself. Occasionally I'll dabble in Spin class, and I really love long-distance runs because I can mull over the day and be alone with my thoughts. It's like a free therapy session minus the trouble of talking to people. And then I tried barre.

Related:
Exactly What You Need to Know Before Trying Orangetheory in 2022 — Including the Price

After taking the elevator up to the second floor and walking into the Bar Method studio in Soho, my outlook on working out forever changed for the better. Here's what I learned after going a few times.

Unlike other classes I've taken, the instructors at barre really go out of their way to introduce themselves to you before the class starts. While most of these superhumans resemble a more jacked version of Barbie, they're very good at making you feel comfortable if it's your first time around the barre block. And TBH, I'd be lying if I said they didn't make me want to go more. By the looks of them, these ladies are doing something right.

2. Just because there are mirrors in the room doesn't mean everyone's watching you.

If hitting up workout classes isn't exactly your go-to afterwork activity, trying something new for the first time in a room that's literally covered in mirrors is enough to make your anxiety skyrocket. And honestly, before the class started, I was panicking. I literally thought everyone was going to be watching me and that I would look like a complete idiot.

While I was right to assume I was going to look like Napoleon Dynamite in the talent show dance scene, I assure you that no one noticed. Why? Because barre is one of those classes that you seriously have to pay attention in. It's literally a ballet class minus full-fledged dancing, and that means every person is solely focused on how their own bodies look doing the moves. There's literally no time (or point) in scanning the room to look at other people, and that gave me a weird amount of solace.

3. You're going to get called out on your form, and that's a very good thing.

Katie warned me well in advance that the instructors fix your posture and call you out by name throughout the entire class. As someone who's never been able to touch their toes, I knew I was going to be the focal point of said criticism, and frankly I was thankful, because in order to get everything you can out of a barre class, you need to make sure you're doing each move right or you won't see results. Plus, you really don't want to get hurt. So after a while, I didn't mind hearing, "Murphy, your feet are too far apart" or "Murphy, you need to arch your back more." Fitness classes aren't cheap, and I was determined to reap every single benefit out of this one.

4. The socks aren't necessary when you're starting out.

I felt slightly out of place when I rolled up to class in my cleanest pair of Hanes socks, but at the end of the day, there's not a huge difference between my ratty pair and an official set of barre ones. The special barre socks have little bumps on the bottom so you can get more of a grip when your legs are on the bar, and there's a little piece of fabric in the back that protects your heel. Consider investing in a few pairs once you really commit to going. (I decided to go twice a week and bought some online.)

5. It's OK if you're the least flexible person in the room.

I am the least flexible person I know. It was seriously a real effort for me to get my leg up on the bar to begin with, but I prevailed. (I also fell off the bar at one point and had to grab on to my friend for dear life, but we need not go into that.) After one exercise, the instructor said, "OK, if you're working on your split, now's the time to go for it." I looked up to see my friend in a perfect split that I honestly thought was a myth reserved for stunt doubles and circus performers. I reject the idea that the human body was meant to do this. I just reject it, period.

With that being said, the point of barre is to strengthen and elongate your muscles, so going two or three times a week will set you up to be more flexible down the road. Believe it or not, I started to feel and see results after going three times. And, added bonus: it made me more inclined to stretch after my other workouts, something I often — ahem — neglected to do in the past.

Related:
I Did a 10-Minute Ab Workout Every Day For 2 Weeks — This Happened to My Belly

Of all the exercise classes I've done, barre is by far the most sneaky from a spectator's standpoint. You aren't expected to do sweeping, complicated moves or use weights that make you cry just from looking at them, but trust me: you'll be sore the next morning. I learned this the hard way after watching the class before mine finish up. I remember thinking, "How hard can it be? I used to run miles of sprints and regularly deadlift in the weight room." The short answer: really f*cking hard. All the tiny movements and reps seriously add up, so don't be surprised if you start shaking during an especially challenging set — it means you're actually trying.

Another giant misconception I had about barre was that I'd get bored. I had tried yoga a few times and found it really hard to stay focused. I even fell asleep once (shh!), so I definitely had my doubts about it. But like most situations, I was 100 percent wrong. The movements are so precise, you literally don't have time to focus on anything else other than what your legs and arms are doing, and that's oddly refreshing. After class, I caught the subway feeling a lot lighter mentally. The stress of the day really melted away, and I felt stronger both mentally and physically. Once you get the hang of it, 60 minutes really flies by.

So if you're thinking about testing the barre waters but have a few reservations, say f*ck it and sign up anyway. You'll never know if you like something unless you try it, right? And who knows? Maybe one day I'll be able to do a split after all.