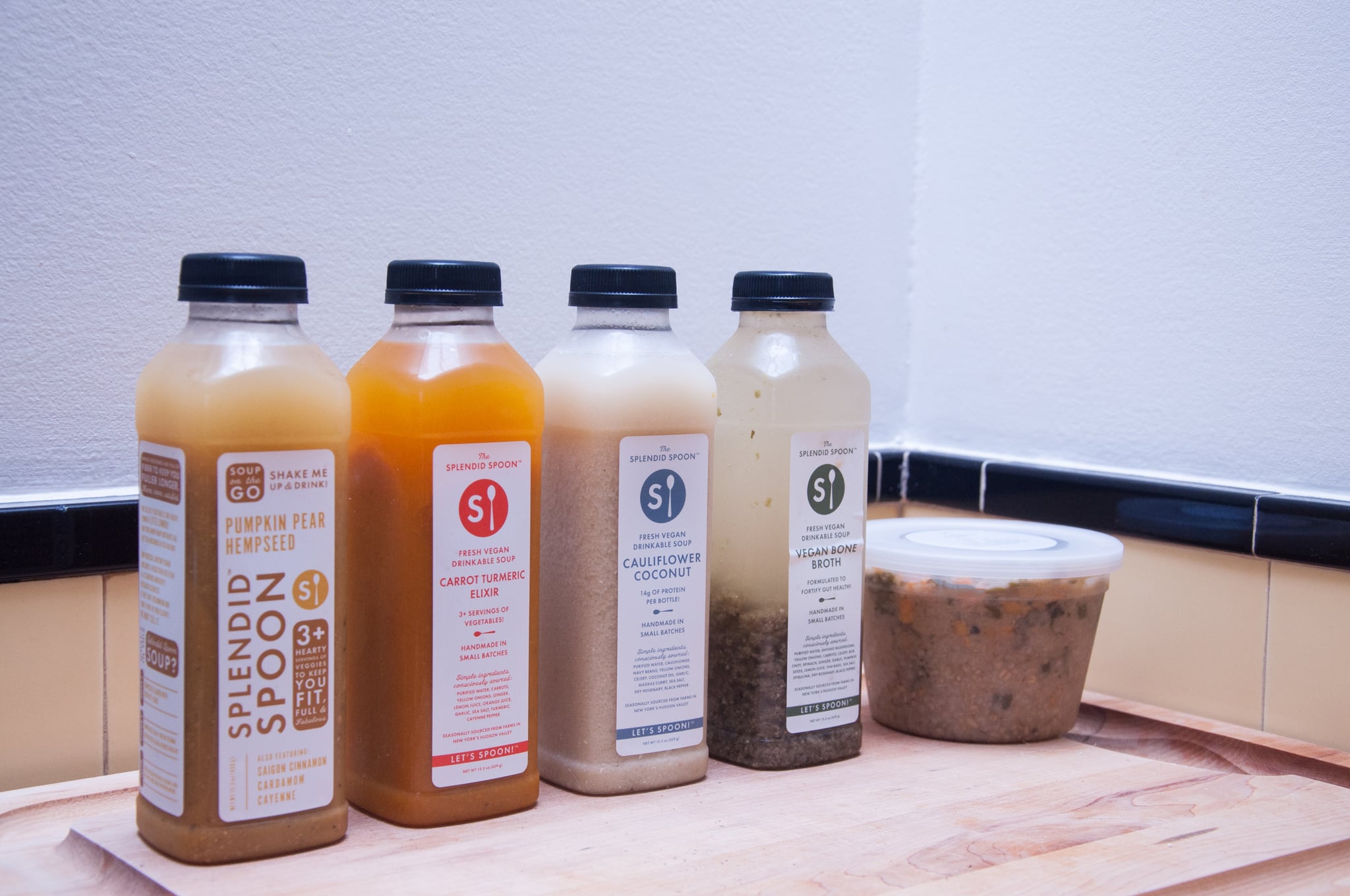 When I first learned about souping, I was immediately intrigued, and wanted to try it for myself. I had tried juice cleanses before, yet never felt "cleansed" or detoxed, and definitely never felt satisfied. Soup cleanses actually give you fiber from the vegetables (and sometimes fruits), which is often lost in a juice cleanse, and we all know that fiber is super key for digestive health. I'm also not a huge vegetable juice fan (I prefer fruit juices, to be perfectly honest), but consuming vegetables at a warm or hot temperature sounded much more appetizing to me. Plus, I freakin' love soup! I could eat soup all day long for suuuure.

And that's just what you do in a soup cleanse. You eat soup. All day long.

I was so excited for my first foray into souping, so I ordered myself a one-day cleanse from Splendid Spoon. Although I didn't get to choose flavors, everything I had seen on the site indicated that there would be some delicious offerings. I couldn't wait to see what was in my package!

However, my friend Amanda beat me to the punch; upon reading my post about soup cleanses (mere moments after the story was published), she bought both versions of the soup cleanse and got started before I did. My soups arrived on a Friday afternoon, and I got a text from Amanda saying "Hey, I hate to break it to you, but the soups don't have a lot of calories; I panicked and ate a pizza" (sorry for outing you, Amanda). This sparked a bit of panic of my own, so I began to plan ahead — I'd add in some calories, but stick to the plant-based, liquid (mostly) diet. I'm not about starving myself, no matter what a cleanse offers. If I'm hungry, I'm gonna eat, even if that means liquid food.

Before I get started, a little about Splendid Spoon's cleanse: the brand says that with souping, you'll "embrace a better body [and] discover a healthier you." I want a better body! AND a healthier me! The cleanse promises to deliver nutrients you won't get with raw food, increased "bioavailability of fat-soluble vitamins and nutrients," more antioxidants, reduced inflammation, a boosted metabolism, refreshed immunity, an organ detox, and the ability to shed unwanted weight. All of that sounded great, but I just wanted a quick "reset" before I head to Hawaii on vacation. Having a preplanned, prepared, plant-based diet sounded like the ideal way to do so. If anything, it wouldn't hurt to have a day free from pizza and bagels, right?

On Splendid Spoon's one-day program, they recommend you "take it easy" or do a lighter workout. You're encouraged to incorporate mindfulness and meditation, limit coffee to one cup, and avoid all alcohol. Green tea is also recommended, as well as plenty of water.

When I totaled up the calories, four soups came in at under 600 total (this didn't include the dinner bowl of steel-cut congee; calories weren't printed on the label). The panic increased — for the amount I exercise, my maintenance caloric intake hovers around the 1,900 to 2,000 range. This was compounded when I saw that lunch would be a carrot elixir — I love all vegetables except carrots (and beets). And when I say I don't love them, I mean I can't stand them. What was I going to do? Was this cleanse going to crash and burn?

I put those feelings aside, and started the cleanse Sunday. I drank a glass of lemon water (as recommended) and heated up my breakfast soup: cauliflower and coconut with navy beans. It was a delightful, unexpectedly nice first meal (don't think I've ever had soup for breakfast), and the soup was flavorful and rich, thanks to coconut oil. However, I was still starving. In the past few weeks, I've acclimated to eating a large breakfast, and this bowl of soup wasn't going to cut it for me. I made a quick smoothie: light coconut milk, some frozen fruit, and a tablespoon of chia seeds. Blended it up, downed it, and was feeling a lot better.

Next up was lunch: the carrot turmeric elixir I had been dreading. I promised myself I'd give it a shot, so I heated that sucker up, and drank. To my complete and total surprise, it was SO tasty, not too "carroty", and particularly filling. I had a cup of coffee, which made me feel even more full, and I was feeling really satiated for quite a long time.

Soup three was the "snack soup" — a mix of pumpkin, pear, cardamom, cinnamon, hempseed, and vanilla — to be drunk cold from the bottle or heated up. I wanted to experience both, so I did half cold and half hot. It was rich, filling (noticing a theme here), perfectly sweet, and incredibly delicious in both hot and cold forms. However, heading into summertime, I was really hoping for a summery soup . . . taking a sip of this one sent my brain to mid-November — Thanksgiving vibes, Yankee candles, Autumn wreaths . . . so it was a bit confusing. But I can't complain: it tasted great and kept me full. I'll definitely try to re-create this in the Fall.

I used the day to take care of myself: I practiced some yoga and meditation (meditation was recommended on the cleanse pamphlet), and felt wonderful. I was a little tired, though, so I took a tiny nap before doing a face mask and some aromatherapy, and binge-watched Unbreakable Kimmy Schmidt. Seriously, all-around epic Sunday.

Before dinnertime rolled around, I got in my head again (surprise!), thinking, "What if I don't like this soup? I'm going to be so hungry!" So while I heated up the steel-cut congee — a hearty mix of oats, sweet potatoes, mushrooms, and peanuts — I had a riff off the recommended "failsafe snack" from the souping guide: a banana with some nut butter. This, my friends, was a mistake. I was actually too full. Too full! On a cleanse! The congee was absolutely incredible: savory, rich, and very tasty. In fact, it was SO filling that there's still half a bowl left in my refrigerator. I was STUFFED. WHY did I think I wouldn't like this?!

I couldn't even get to the last soup of the day (thanks, banana): the vegan "bone" broth, which combines shiitake mushrooms, spinach, ginger, bok choy, and a ton of other ingredients for an umami flavor. I heated it up today, and it's just what you'd expect: brothy, and very much umami in flavor (not salty, but savory . . . if that makes sense). And, surprise, it was filling, too!

The lesson learned here is that you shouldn't be afraid of this cleanse. Don't panic! You're eating real food that will leave you satiated — I ended my day with zero hunger pangs or cravings to report. If you need more calories, go for it (my advice would be to do so in the morning), but this won't leave you feeling starved. I wouldn't say I sabotaged my cleanse, but I definitely didn't trust it enough to let go of my fears and really go for it. Although I was intimidated by these new combinations of flavors I have never tried before, they ended up being unbelievably satisfying; I'll likely try to replicate these recipes.

If you're trying this exact cleanse, I'd probably still recommend adding in that morning smoothie, but try to keep to the dietary premise of the cleanse with whatever you make (this one is vegan, but not all soup cleanses are). It's a hard concept to get your head around: not chewing anything all day. But trust me, your body can handle it. And if you've done a juice cleanse, this will be a cake walk for you — especially since you're getting fiber and heartier liquids. Ready to get started? Let go of your fears and start souping!