If you've regularly followed women's track and field at the Summer Olympic Games, chances are you're familiar with the name Lolo Jones. Although the Olympic hurdler never medaled in 2008, 2012, or 2014, many would agree that she left her mark with her perseverance. In addition to her storied athletic career, Jones has been in the spotlight for a variety of reasons related to her childhood upbringing as well as her adult life. As we get ready to head to Pyeongchang, South Korea, for the Winter Olympics in February — where we might see Lolo on the bobsled team — we take a look at eight facts you likely didn't know about this athlete.

While Jones is best known for her stints on the track, she represented the US in bobsledding at the 2014 Winter Olympics and might just return for the 2018 Olympic Games. While she didn't medal in 2014, she won gold in the bobsled team event at the 2013 World Championships.

Her birth name is Lori

Jones shares her first name with her mother and has said that the nickname was born out of wanting to ease confusion when people asked to speak to Lori on the telephone. 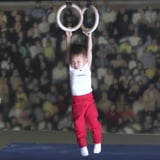 She was homeless in high school

Jones bounced from apartment to apartment and school to school for the first 18 years of her life, somehow managing to always keep her grades up along the way. She has credited the Salvation Army with changing her life, at one point allowing her family to live in a church basement during her high school years.

Jones has been adamant about never claiming to be either black or white, instead proudly accepting herself as both. In a 2015 tweet, she said, "the only race I will ever claim is the 100-meter hurdle race."

She's been very outspoken about staying a virgin until marriage

Even in her 30s, Jones has been open about the fact that she has had a hard time with online dating and staying true to her wish to wait to have sex until she is married.

Related:
Olympic Gymnast Aly Raisman Has Abs of Steel and They Demand to Be Acknowledged

Sports aren't the only area she's excelled in

In high school, Jones played the cello in the orchestra and later went on to earn degrees in Spanish and economics at Louisiana State University. Talk about a well-rounded cultural background.

She has posed nude

In 2009, Jones posed in the buff for ESPN the Magazine's annual body issue, in which athletes pose in the nude. Jones has said that at first, she was uncomfortable with the idea.