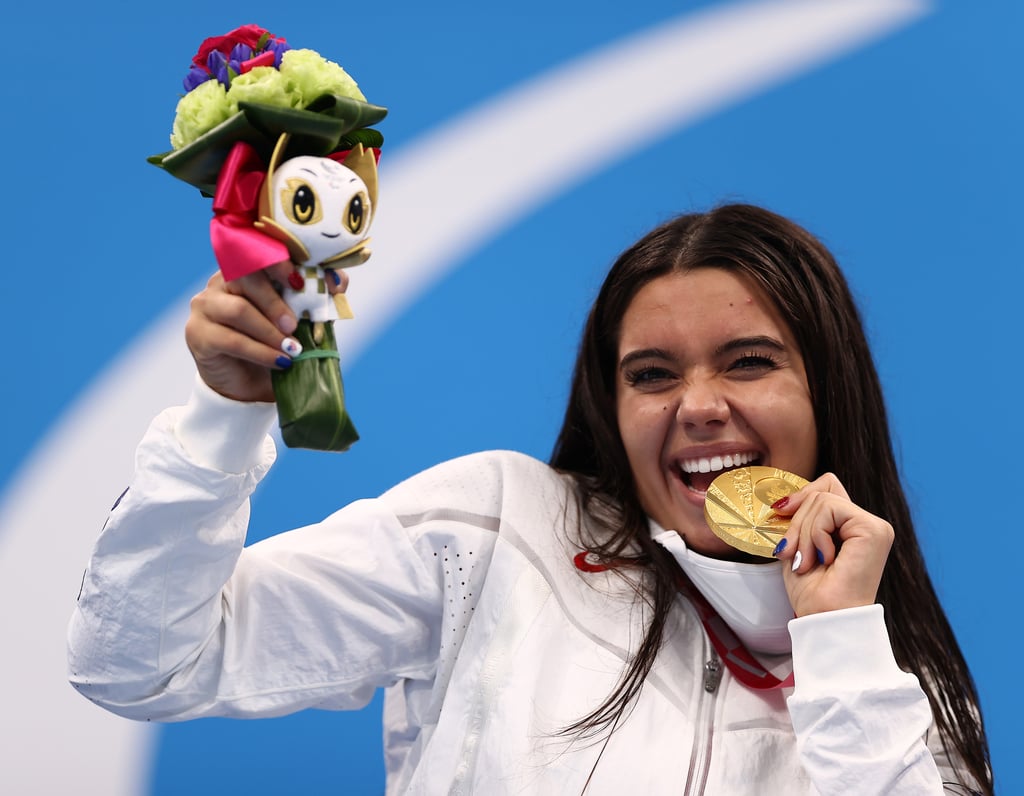 At just 17 years old, Paralympic Swimmer Anastasia Pagonis won Team USA's first gold medal of the Tokyo Paralympics on Thursday in the 400m freestyle S11. Not only did she win a gold medal, but with a time of 4:54.49, she broke the Paralympic world record. Pagonis had actually set the record earlier in the day after winning her heat with a time of 4:58.40, and that time had broken her previous world Paralympic record of 4:56.16, which she set in June at the US Paralympic Trials. She just keeps getting faster!

Pagonis is blind and swims in the S11 classification; the "S" stands for freestyle, butterfly, and backstroke events, and the "11" means athletes have very low visual acuity and/or no light perception. She uses her huge following on TikTok (where she has two million followers) and Instagram (where she has more than 200,000 followers) to change how society views the visually impaired, and also to share tips and tricks for other blind people. NBC Olympics shared that she uses social media as an outlet to support her own mental health, and to inspire others to erase the negative stereotypes associated with blind people.

Anastasia Pagonis captures gold in the women's 400m freestyle S11 and breaks her own world record in the process.#TokyoParalympics | #ShowTheWorld pic.twitter.com/izhUPNIUkN

Who Is Anastasia Pagonis?

Growing up in Long Island, NY, Pagonis didn't start off as a swimmer; instead, she played soccer. She was able to see until age 9, and then her vision gradually began to fade. By 11 years old, she was diagnosed with both a genetic eye disorder known as Stargardt Disease, as well as autoimmune retinopathy, a rare condition that affects the retina. Swimming was suggested by her doctor, since it's something she can do without vision.

Pagonis was able to make her debut at the World Para Swimming World Series in February 2020 in Melbourne, where she won gold twice. And, as mentioned earlier, at the Paralympic Trials in June 2021, she broke the world record in the 400m, but she also set an American record in the S11 100-meter freestyle with a time of 1:06.89.

And this isn't it for Pagonis! She has three more events at the Tokyo Paralympics: 50m freestyle (Friday, Aug. 27), 200m IM (Monday, Aug. 30), and 100m free (Friday, Sept. 3). Keep reading to watch a hilarious TikTok video and see photos from her winning gold.

Related:
These Close-Up Photos of the Paralympic Medals Have Us Counting Down to the Games
Previous Next Start Slideshow
Summer Olympics 2021SwimmingParalympic GamesDisabilityAthletes