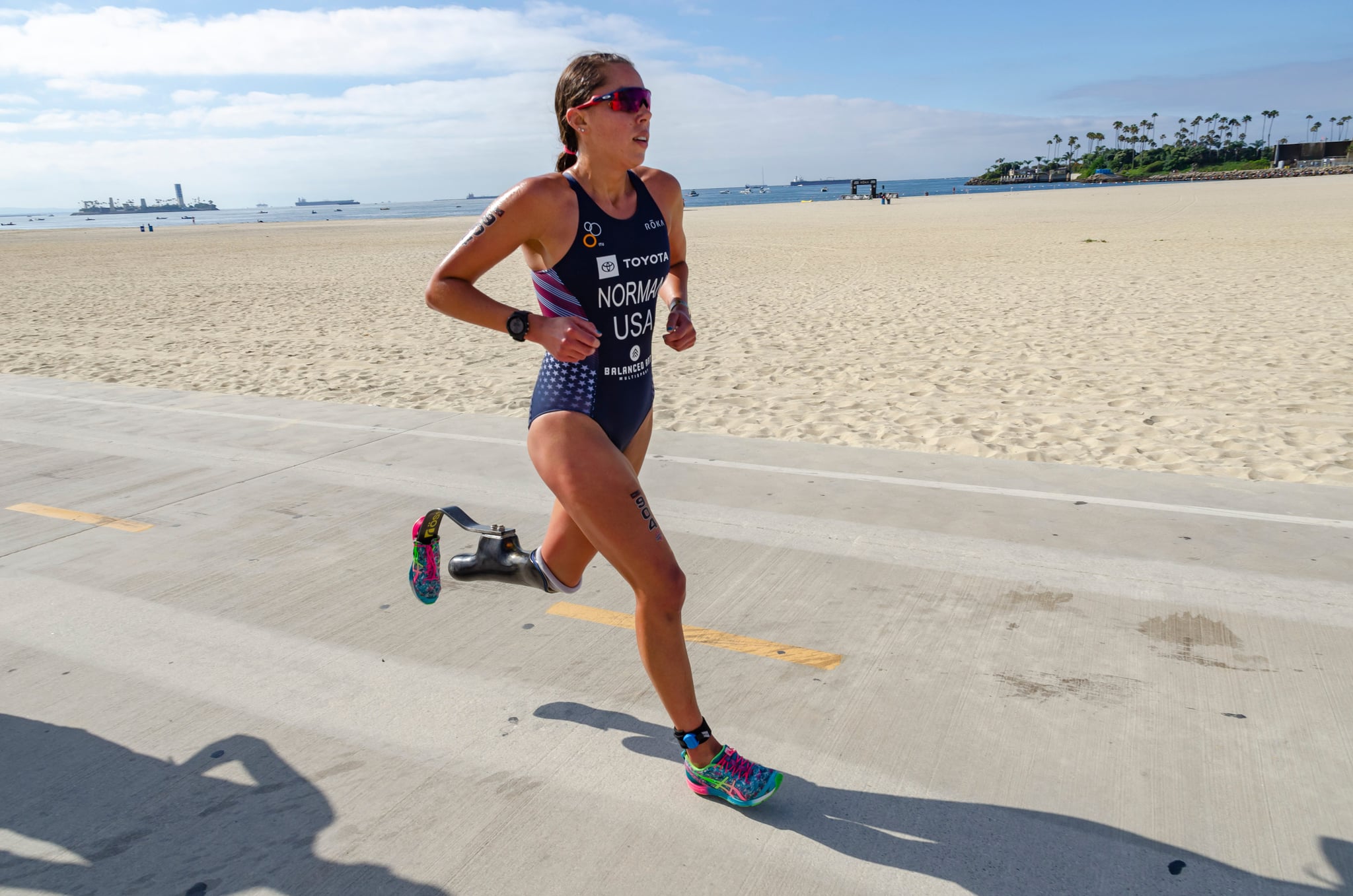 Crossing the paratriathlon finish line at the 2016 Rio Paralympic Games was surreal for Grace Norman. She was, as she described, a "crying heap at the end" due to a culmination of exhaustion and excitement. "The moment when I made the pass into first place was pretty amazing," Norman told POPSUGAR. "I knew there was no really coming back from the second place athlete." This marked the sport's debut at the Paralympics, so crossing that finish line not only clinched a victory but made her the first American athlete and first woman athlete from any country to win a paratriathlon gold medal.

Norman, who, at birth, was diagnosed with a congenital condition that required amputation of her left leg below the knee and right big toe, also won bronze in Rio's T44 400-meter track and field event (each Paralympic sport is broken up into different disability classifications). This time around in Tokyo, she's solely focused on defending her triathlon gold medal — she's built more for the paratriathlon anyway, she explained.

When Norman became interested in the Paralympics, she said she realized not all distance track and field events were available for her disability classification. Given that she had a background in running, paratriathlon appealed to her instead, especially because of the 5K at the end. "Once I started it, I fell in love with it, and quickly claimed it as my own sport," she recalled.

Triathlon swimming wouldn't prove difficult for Norman since she swam in high school, but the biking portion was her biggest challenge. Being able to cycle at that high level, she said, still is one of her hardest hurdles, and when we spoke in April, she noted that her training was very cycling-focused. At the beginning of the COVID-19 pandemic, she didn't have much training structure, but now it's more race-specific as she dials in on pacing. She'll take Mondays off every week followed by endurance-heavy Tuesdays, sprint work on Wednesdays, run sessions on Thursdays, "easy" Fridays, and bike-centered weekends. In other words: it's a lot; 18 to 20 hours worth of practice weekly.

Related:
Femita Ayanbeku Is Ready For Another Paralympics: "The Medal I Deserve Will Be Around My Neck"

At the start of the pandemic, Norman was under lockdown in St. George, UT, where she'd been traveling for a race. One of her teammates's families took her in, and over the next few months, she finished her nursing degree from Cedarville University via Zoom (she recently walked in her postponed graduation a year later). It was a trying time, she said, but the pandemic showed her the value of a job in the medical field.

"It made me excited that I had chosen a major that could be readily used," Norman said. She added that though she doesn't plan on finding a nursing placement until after the Games, she has her RN license. "I think with the vaccines coming out, I feel a lot safer going into the field in a few months post-Games. I'm definitely very excited to use my nursing career for the better of others." She's specifically interested in pursuing ER or psychiatric nursing.

Having the ability to prioritize and manage your time, in addition to paying attention to detail, are strengths that both nurses and triathletes need, Norman said. Her experience, too, as a student-athlete on the Cedarville track and field and cross country teams, as well as periodically on a club triathlon team, helped her garner those time-management skills and put them to good use.

Norman aims to compete in the Tokyo paratriathlon this summer in the PTS5 classification — the Rio paratriathlon she competed in was the PT4 race, which has since been redesigned to PTS5. A selection event is set for the end of June, and come July, the full US Paralympic team will be announced. Pending her qualification, she hopes to perform at the best of her ability and, of course, defend that gleaming gold medal.

To learn more about all the Olympic and Paralympic hopefuls, visit TeamUSA.org. Watch the Tokyo Olympics and Paralympics this summer on NBC.