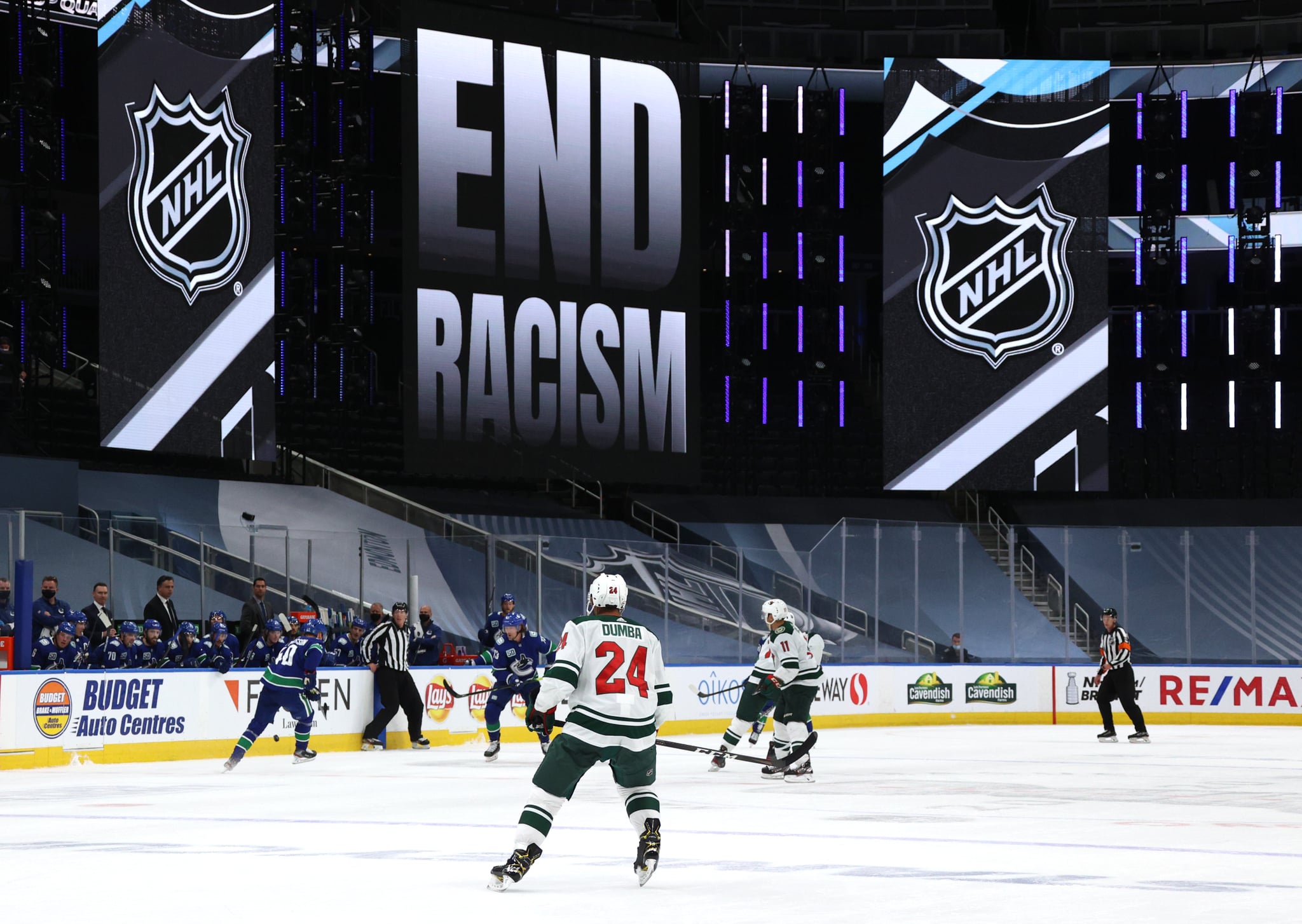 Update: The NHL Players' Association, together with the NHL, released a statement announcing that all playoff games scheduled for Thursday, Aug. 27, and Friday, Aug. 28, will be postponed. Play will resume on Saturday (find an updated schedule here). This came after a push for postponement from the Hockey Diversity Alliance (HDA) and its members. "We understand that the tragedies involving Jacob Blake, George Floyd, Breonna Taylor and others require us to recognize this moment," the statement reads. "We pledge to work to use our sport to influence positive change in society."

Original post: On Aug. 26, pro leagues across sports postponed their games, commencing in a strike following the police shooting of 29-year-old Jacob Blake three days prior. Blake was shot seven times in the back in front of his children in Kenosha, WI, leaving him paralyzed from the waist down. Instead of playing, WNBA athletes walked onto the courts in shirts that bore exactly seven holes, representing the seven bullets shot in Blake's back. (WNBA games for Thursday, Aug. 27 have also been postponed.) Many MLB teams chose to postpone their games as well.

The NBA followed suit, postponing play for their playoff games — they won't be back on until Friday or Saturday — and Major League Soccer matches were also postponed as players commenced in a strike. Hockey playoff games, however, were still held — and athletes as well as commentators are expressing their frustration and disappointment with the NHL over this decision.

The NHL conducted a "moment of reflection" prior to the game between the Tampa Bay Lightning and Boston Bruins Wednesday night. "End Racism" was seen on the jumbotron and a voiceover proceeded. Analyst and former NHL goaltender Kelly Hrudey said the NHL should have worked to postpone their playoff games instead. "I don't think we should be here," he stated, adding that he'd rather be having important conversations with his family about, for instance, the Black Lives Matter movement as opposed to watching hockey.

Former pro hockey player Akim Aliu, a founding member of the Hockey Diversity Alliance (HDA), called the statement of solidarity for the Black community by other sports leagues "amazing," on Twitter. He then challenged the NHL: "where you at? . . . tick tock." On a similar note, Sarah Nurse, an Olympian and player for the Canadian Women's Hockey League, said on Twitter, "Black Lives are more important than sports. PERIOD. I'm going to need hockey, especially, to understand that. Where has the anti-racism 'listening & learning' over the last months gotten the hockey community??"

Black Lives are more important than sports. PERIOD. I’m going to need hockey, especially, to understand that. Where has the anti-racism “listening & learning” over the last months gotten the hockey community??

Minnesota Wild defenseman Matt Dumba, another founding member of the HDA who recently demonstrated by taking a knee during the national anthem and giving a speech on racial injustice before one of the Stanley Cup qualifying series games on Aug. 1, said he was disappointed in his league. "The NHL . . . we're always late to the party, especially on these topics, so it's sort of sad and disheartening for me and other members of the HDA, and I'm sure other guys across the league."

It's important to note that, as one editor and columnist from USA Today Sports pointed out, "Black Lives Matter" was not in any of the NHL's messaging during that Aug. 1 ceremony — they used #WeSkateForBetterDays and #WeSkateForBlackLives despite the fact that Dumba's own messaging in his speech included it along with a call to action. To many, the NHL had a chance to answer that call on Wednesday night and failed to do so.

"It's clear the league is not comfortable saying those words and why, instead, they're leaning so heavily on the anodyne 'End Racism' and 'Black Lives,'" the USA Today Sports editor noted. Dumba also spoke on behalf of the HDA and the NHL, the player said at the time, but as the editor further noted, they relied on him alone to make this statement.

"It's not just my responsibility as a minority player in the NHL to be talking about these issues. We need to be better."

As Evander Kane from the NHL's San Jose Sharks, also a fellow founding member of HDA, said on Wednesday, it's not on him and other BIPOC players to come forward and speak about racial injustice. "It's not just my responsibility as a minority player in the NHL to be talking about these issues," Kane told Sportsnet. "We need to be better."

Dumba agreed, saying, "The white players in our league need to have answers for what they're seeing in society right now, and where they stand." Her continued, "But what would really make the most impact is to have strong white leaders from teams step up and have their two cents heard."

According to The Associated Press, the NHL Players' Association is having discussions about the potential postponement of games moving forward. Kane and other HDA members also tweeted that the HDA is formally requesting the NHL suspends playoff games Thursday, Aug. 27. He wrote, "We strongly feel this sends a clear message that human rights take priority over sports."