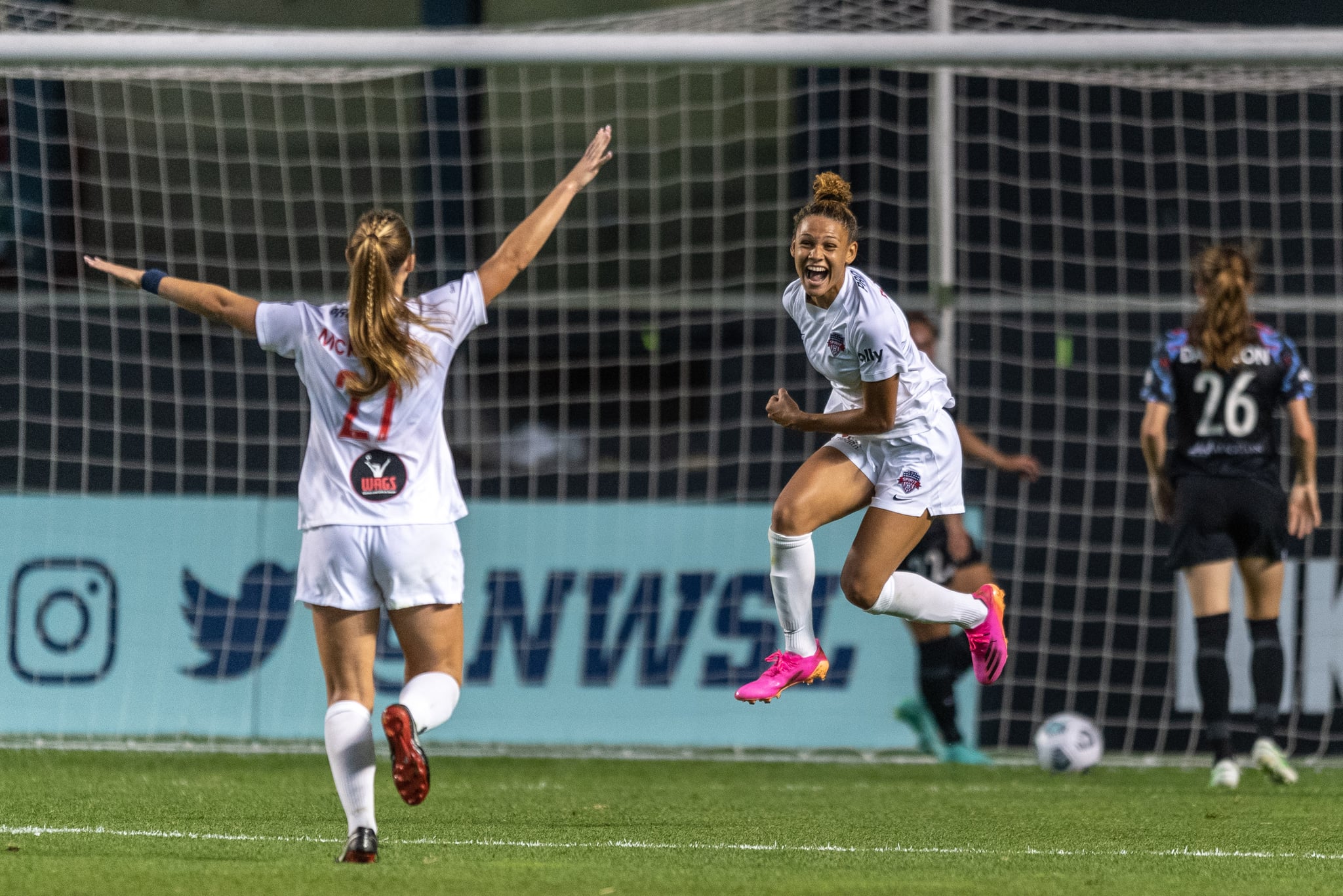 "Wow — I made it," Rodman remembers thinking when she heard her name called in January's NWSL draft. She was the second overall pick, headed for the Washington Spirit. Through the excitement, she gave a "sigh of relief," Rodman said. "Now I can finally go to a team and start this grind and start becoming a better player."

Eighteen years old at the time, Rodman had spent only a few months in college at Washington State before she realized it was time to go pro. It wasn't an impulse decision, she said. All along, "I knew I wasn't going to stay for all four years. I wanted to get to the next level as fast as I could." When the season was delayed for COVID-19 and the team sent home, she knew it was time. "I'd rather go now than wait" and potentially lose more months of development, she explained.

Going Pro With the Washington Spirit

But as ready as she was, Rodman said the transition into pro soccer with the Washington Spirit wasn't easy. "When I first got here, not going to lie, it was kind of a train wreck," she told POPSUGAR. The game was more physical, the players stronger and faster. For the first few practices, "I was getting beat to the ball all the time. I couldn't make shots," she remembered. "Just with everything, I felt a little bit behind."

Rodman had expected the learning curve. She reminded herself, "This is a given. This is going to happen. It's going to take time, because there's no way an 18-year-old is going to come into this environment and be able to beat these players." She has a particular mindset: "Failing is going to set me up to succeed." She stayed open-minded, listened to her coaches, and embraced the way her teammates pushed her to get better.

When the season got under way, Rodman learned that pro games would be just as intense as she expected. The speed of play is at another level, Rodman says; as an attacker, she has a defender on her back "as soon as, or even before" she gets the ball. Runs and passes have to be timed perfectly. "Awareness is a huge part that I've had to work on."

Related:
Will the USWNT Grab Gold in Tokyo? 7 Olympic Soccer Predictions to Prepare You For Kickoff

The adjustment has been tough, the game moves faster, and the opposition is as strong as any she's played against. But none of that stopped Rodman from having a debut season for the ages, starting from her very first professional game in April. The Spirit were losing, 3-1, and Rodman was on the bench, itching to get in the game and get to work. Her coach subbed her in, and a few minutes later, she received a perfect lofted pass upfield from teammate Natalie Jacobs. Rodman controlled the ball with one skilled touch, then sliced it into the back of the net, making her the youngest NWSL player to score a goal in the league's history. "I was so in the moment that I didn't even think it was real," she remembered. Attacking players can wait days or weeks for their first goal, and Rodman was "ecstatic" and, again, relieved to knock another career milestone off her list so quickly. "That goal was awesome," she remembered. "The ball was perfect."

It also gave her the chance for her first goal celebration as a pro, something Rodman maybe wasn't as prepared for. "I didn't even have a celebration!" she said. Improvising, she remembered an inside joke she had with teammate Ashley Sanchez, where they flex their bicep any time they pull off a move or do something funny in practice. "You can see after I scored, I did this weird muscle-flex thing," Rodman said. "I was like, 'Oh, how can I make this cool?' Then I looked at Ashley and I was like, 'Ah! I got it.' Everybody hyped me up after. It was awesome."

💥 @trinity_rodman is here, and she is not. messing. around. pic.twitter.com/OY6i28k3ct

"I Want People to Know Who Trinity Is"

If you haven't watched Rodman on the field just yet, flying toward the goal or celebrating with her teammates, maybe you've seen her on social media. Rodman vlogs on YouTube, sharing fashion hauls, giving glimpses of her life as a pro soccer player, and answering fan questions. Right now, though, her favorite platform is TikTok. It's more low-key and "spur of the moment," she explained. "I'll be scrolling through TikTok, I'll find a cool dance and spend like an hour learning it and then hit it out," she said.

The harder part is convincing her teammates to do it with her. When she asked Spirit teammate (and US Women's National Team member) Emily Sonnett to film a dance with her, "it took her three weeks," Rodman remembered. "I was like, 'OK, are we going to do the TikTok for next game?' And she'll say, 'Next game, I still have to learn part of it.'" (They did finally get around to filming it. It was worth the wait.)

Rodman wants to connect with people through her personality and passions, not just what she does on the field. "I didn't just want to be known for playing soccer," she explained. She loves fashion, showing off her personal style (described as "crazy clothes, crazy colors, crazy shoes") when she walks into the locker room. She's passionate about art and loves to paint and draw; she even painted her niece's bedroom, adorning one wall with a huge giraffe and planning to add a monkey when she visits again. (Rodman, the daughter of retired NBA star Dennis Rodman, is tight with her family, especially her mom, sister, and brother. "I talk to them multiple times a day," she said.) Rodman has toyed with turning her artistic interests into a brand in the future.

"Growing up, I've always wanted my influence to expand outside the soccer field," Rodman explained. "I have such a big personality and I want people to know who Trinity is without just seeing me score goals or be intense on the field."

What's Next For Trinity Rodman?

Remember those career milestones, the checklist Rodman keeps in her head? It's nowhere near complete. Rodman's next goal is to get her first call-up to the senior US national team (USWNT), and many in the sport believe she's right on target after her time on the US junior national team and her continuing success in the NWSL.

First call-up, first in-game appearance, first goal on the USWNT — all of those are on the list. So is winning a World Cup and an Olympic gold medal. Everything she does professionally — scoring goals, facing off against her teammates and current USWNT stars Sonnett and Kelley O'Hara, even when she "dreads" going up against their defensive skills — are designed to help her achieve those dreams. It's about taking it day by day, but also keeping her eyes on the ultimate prize, she said. "I just use all these things as building blocks to get there."