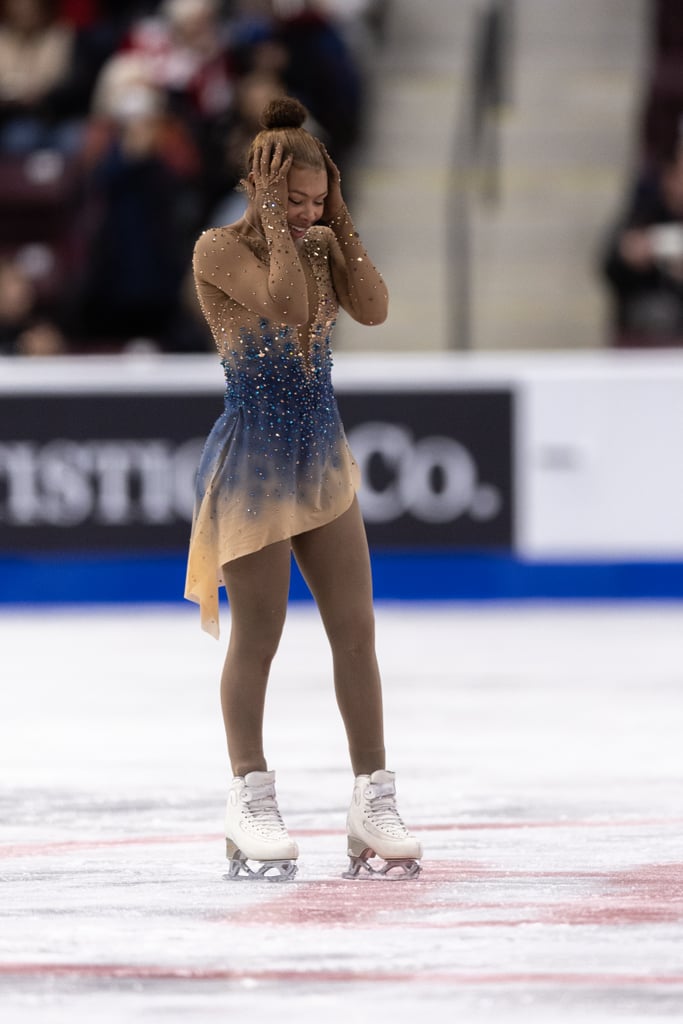 On Oct. 29, 21-year-old Starr Andrews made history at Skate Canada in Mississauga, Ontario, as the first Black US figure skater to win an ISU Grand Prix medal since the series began in 1995. Now, Andrews is taking a moment to celebrate her win on the "Jennifer Hudson Show."

"It's amazing. I can't even put into words," Andrews told Hudson of the historical moment. Shortly after her win, Andrews took to social media to express her thanks and excitement. "I couldn't be more proud of how I skated in Canada. Thank you to all the support I've gotten even on the skates that weren't my best. This is a dream come true," Andrews wrote in a post.

During the Skate Canada competition, Andrews performed her second program of the tournament — a beautiful free skate to Belgian singer Lara Fabian's rendition of "Je Suis Malade" — moving up from fifth place to second overall with a score of 191.26, 10 points higher than her previous personal best at a Grand Prix in France in 2019. During the program, Andrews expertly executed six triple jumps, including a difficult double-axel euler triple salchow. Japan's Rinka Watanabe took first with a total of 197.59 points, while Young You of South Korea earned the bronze medal with 190.15 points, according to Team USA.

As she saw the scores coming in, Andrews tells Hudson that she couldn't believe her eyes. "I was watching the screen after I finished because there was still competitors after me. And I was like, 'I'm still in second.'" That's when it clicked for the 21-year-old that she was actually going to place. "I was freaking out," Andrews tells Hudson.

Weeks after the competition, the reality of the moment is still sinking in. "I think it's a huge deal, to be a woman of color in figure skating," Andrews told Team USA of the defining moment in figure-skating history and the need to diversify the sport. "I'm so proud I could represent. [It makes] bringing home a medal even more special . . . I actually still feel like it's a dream."

It's clear that Andrews will cherish the win for years to come. As she took off her medal to show Hudson, Andrews handled it with the utmost care, expressing how nervous she was when it was given to her. "I'm very clumsy, I don't want to drop it. It's so special," Andrews said. The medal is made of clear, engraved glass. Andrews told Hudson that she gave the medal to her mother for safekeeping after her win and she will soon go back to admiring it from a distance.

The history-making skater also spoke to Hudson host about her viral 2010 performance to Willow Smith's "Whip My Hair," which gained tens of millions of views on YouTube. At the time of her performance, Andrews was only 9 years old.

"I was having so much fun," Starr told Hudson, regarding her viral performance. "I wanted to skate to ["Whip My Hair"] so bad. I love this and Willow Smith."

Between her viral fame and historic Grand Prix win, Andrews has also wowed audiences with performances set to Mickey Guyton's "Black Like Me" and, more recently, her own cover of "At Last" by Etta James at Skate America 2021. Watch Andrews's stunning performance here, and check out the moment she realized she'd made history.