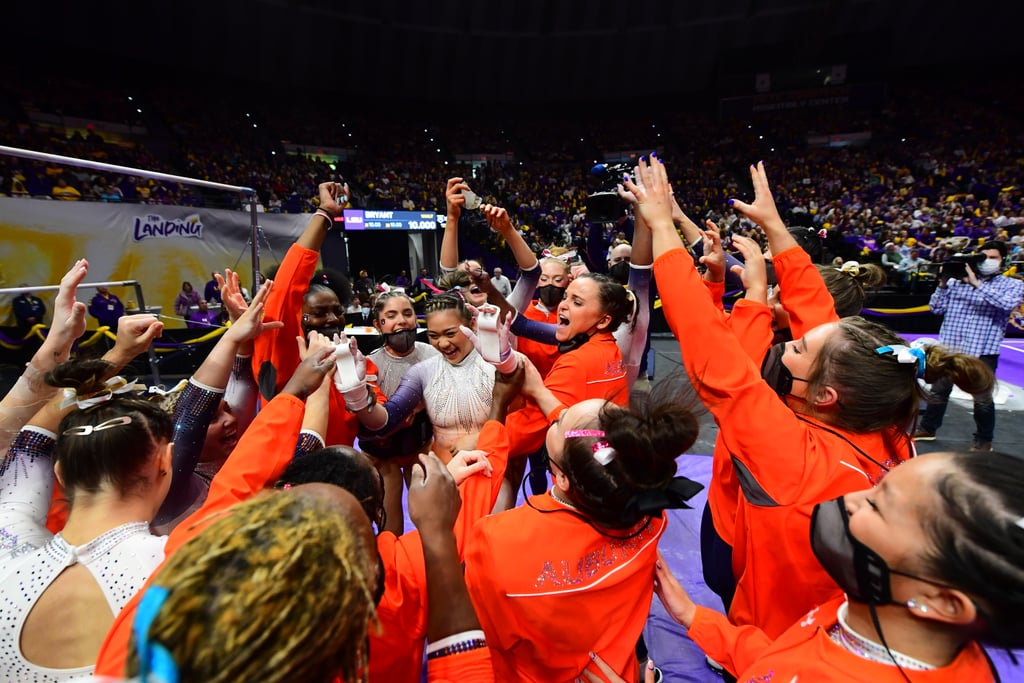 The United States had a strong squad of women artistic gymnasts at the Tokyo Olympics, and on Feb. 4 and Feb. 5, every one of those women who'd transitioned from the elite world to collegiate gymnastics — Jordan Chiles, Suni Lee, Grace McCallum, and Jade Carey — scored their debut perfect 10s in the NCAA. On the first day, McCallum, from the University of Utah, showcased a 10.00 bar routine; then Chiles, on the opposing school of UCLA, came to shine with a perfect-10 floor routine set to Lizzo, Doja Cat, and Normani. Auburn's Lee and Oregon State University's Carey earned their own perfect marks on bars in separate meets the following day.

When it comes down to it, the elite world is more about individual performances. Women's gymnastics on the college level, while highlighting standout talent, focuses primarily on fostering a team environment. There's also a difference in scoring — the elite level follows a complex system of combined execution and difficulty scores that surpass a 10.00, and collegiate routines (except for some vaults that have lower starting values) are scored out of the elusive 10.00.

Delve into the depths of gymnastics "gymnerd" Twitter, and you'll come across passionate debates on any given day about whether or not NCAA judges "overscore" certain teams or routines. But whether you agree with the marks or not, 10.00s across the board do happen in collegiate gymnastics, and when they do, they're a huge deal.

Fellow Team USA gymnast Simone Biles, who competed with these women in Tokyo, congratulated them on Twitter, sending McCallum love, telling Carey she deserves "the world & more," calling Chiles a "superstar," and praising Lee as a "bar queen." Biles may not be done with elite gymnastics (she isn't ruling out Paris 2024), but for now, she plans on enjoying her downtime.

MyKayla Skinner, the last of the women artistic gymnasts who represented Team USA in Tokyo, has retired from the sport. "Love seeing all these girls having fun and slaying in the college world! Keep making your grandma proud!" she wrote on Twitter.

Ahead, check out all of the perfect-10 routines from McCallum, Chiles, Lee, and Carey. They're defined by grade-A form, stuck landings, and an overwhelming roar of subsequent cheers.