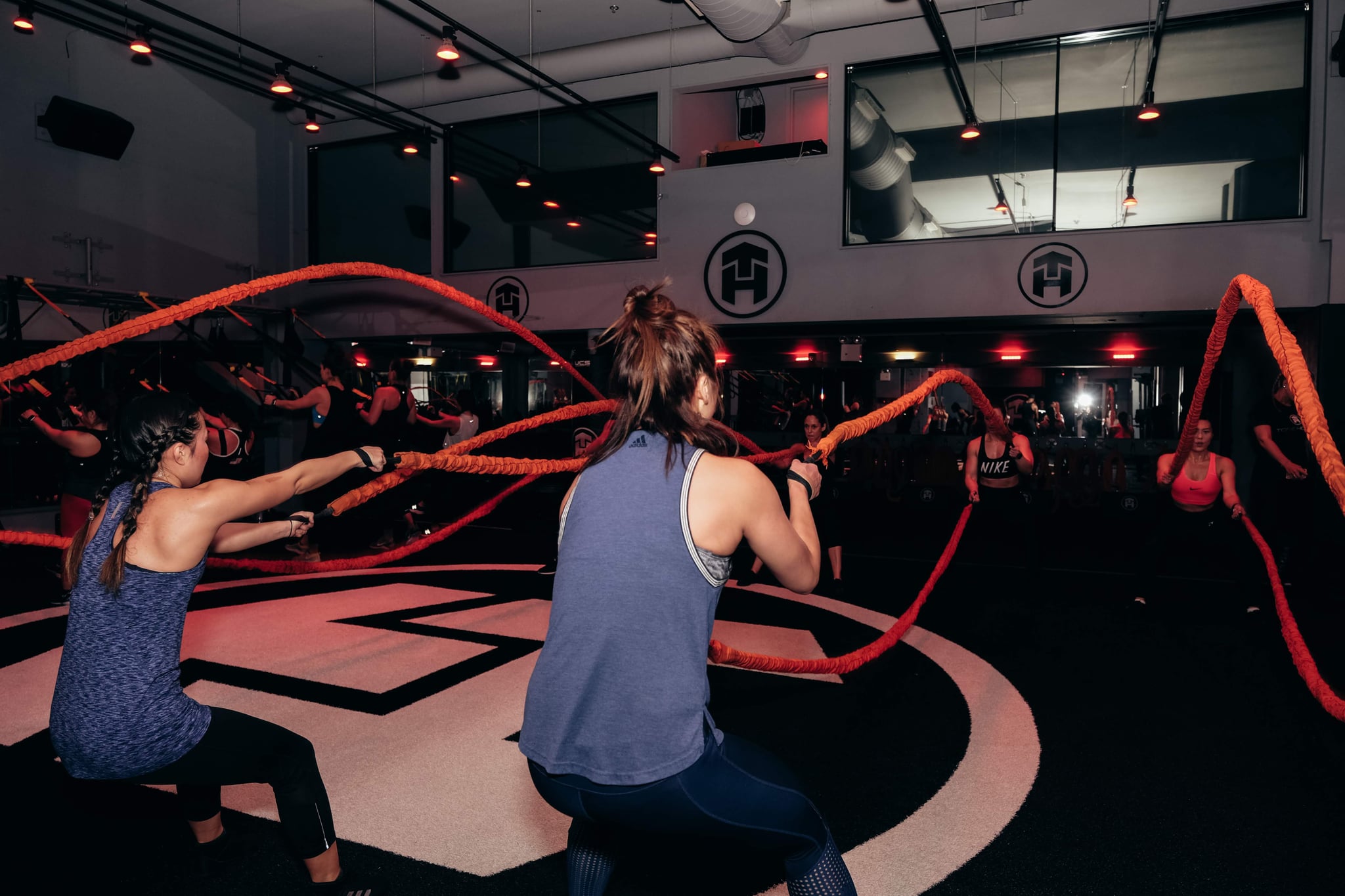 Have you ever wondered what it takes to train like a professional athlete? NASM-certified personal trainer and former professional football player Alonzo Wilson offers a taste of that experience through his studio Tone House. I was invited to take a 45-minute class taught by Wilson — Tone House's founder and director of training — sponsored by watchmakers G-Shock.

From the time I entered Tone House's doors, I knew that this place meant business. The glowing red lights made me feel like I was entering one of those workout montages you see in action movies. Only instead of a montage, I got to feel every moment of the workout. Along with the dim lighting, the space is an oval with a turf floor that has a large Tone House logo in the center, and a variety of equipment including weights, bikes, sleds, and more line the edges.

The workout combines cardio, strength, and endurance training — using bodyweight and equipment-based exercises — to target every muscle you didn't know you had. What makes this intense workout feel doable is the team aspect of the class. Throughout the workout, the class is a team that encourages one another to strive for their personal best without the feeling of alienating anyone for taking alternate variations.

If you want the play-by-play on what goes on during a Tone House workout, keep reading.

When it was time to warm up, Wilson laid out a row of triangular cushions spaced evenly in the middle of the room, with one lone cushion on the far end of the other room. Looking at all these cushions, I immediately knew we'd have to jump over them, but I was caught by surprise with just how many laps we did. We did two laps running along the side of the cushions to the lone cushion then returning to home base. Next we took high knees (or as high as I could get them) between the cushions, sprinted to the lone cushion, and circled back to the start.

Then we got fancy as we did a series of movements between the cushions like weaving in and out, incorporating burpees along the way. Personally, I chose to lunge instead of burpee and was told I made a "great choice" by Wilson — modifications are welcome. After running more than I have since college, it was time to get to the workout.

Getting into the workout, Wilson paired us up and then assigned each pair into one of two groups: an echo bike team and a sled push team. Each pair on the bike team was put on a single bike to alternate every five calories until the pairs on the push team were done alternating between their members to push sleds to one side of the room and back to home base. As someone with a lot of lower-body strength, this section was my favorite part of the workout, especially the sled push. It felt like it was my time to shine as I plowed through the turf to finish first so my teammate and I could take an extra moment to rest before the next section. 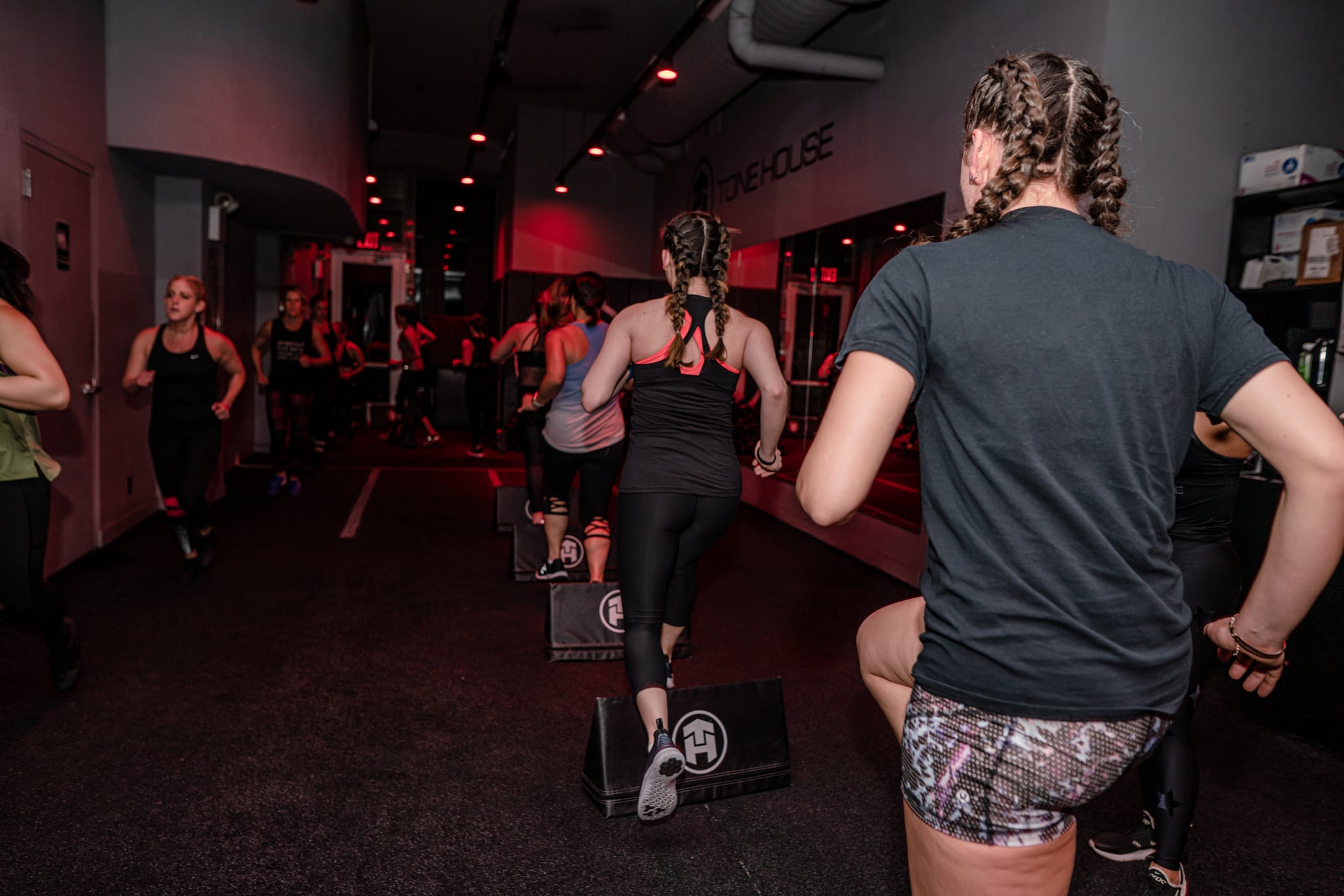 Team Building to the Final Stretch

Coming into the final chunk of our workout, we were split into teams of four. Every team had to football run with their feet until they were told to do a burpee (with no jump) and run one lap back to the starting point. Then we were brought into two lines facing someone we didn't know for a unique section. In these two lines, Wilson played a song that had the words up and down in it.

So what did we do? Push-ups. I opted to go on my knees for the song, and that was a great decision for me to protect my lower back as we held the down of the push-up until the song said up again. Once the song was over, we did a few core-burning exercises and a final stretch. Once we stood from our stretch, we gathered in a circle to cheer once more together.

In just 45 minutes, every ounce of my physical being felt like it was worked. With all of the cardio involved, if I had not used my inhaler, I don't know how I would've navigated most of that workout since lung power was a necessity. At one point, I felt a bit short of breath with my BPM at 168 (about 88 percent of my maximum heart rate), so I definitely recommend taking breaks when you need to.

That being said, while it was one of the toughest workout classes I've ever taken, I would do it again. The environment made me feel like I was training for some big event, the team aspect allows for participants to cheer each other on instead of demeaning anyone for working at their pace, and after class, let's just say my bowels also felt a major shift.

If you're looking to try an "athletic-based, strength and conditioning" style workout. Give Tone House a try . . . and bring your inhaler if you use one.

Workouts
This 10-Minute Total-Body Standing Workout Can Be Done Anywhere, No Equipment Needed
by Lilian Gonzalez 2 days ago