Engineered by Keizo Shimamoto and sold at Brooklyn, NY's Smorgasburg, the Ramen Burger — a shoyu-glazed patty nestled between two eggy ramen buns — has inspired legions of fans to queue up in line for a taste. Inspired by this over-the-top delight, we've developed a home-kitchen-friendly version — try it out and see what all the hype is about!

To shape the ramen into a bun, use ramekins that are similar in size to the burger patty. If you don't have ramekins, substitute pint-size deli containers. 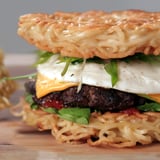