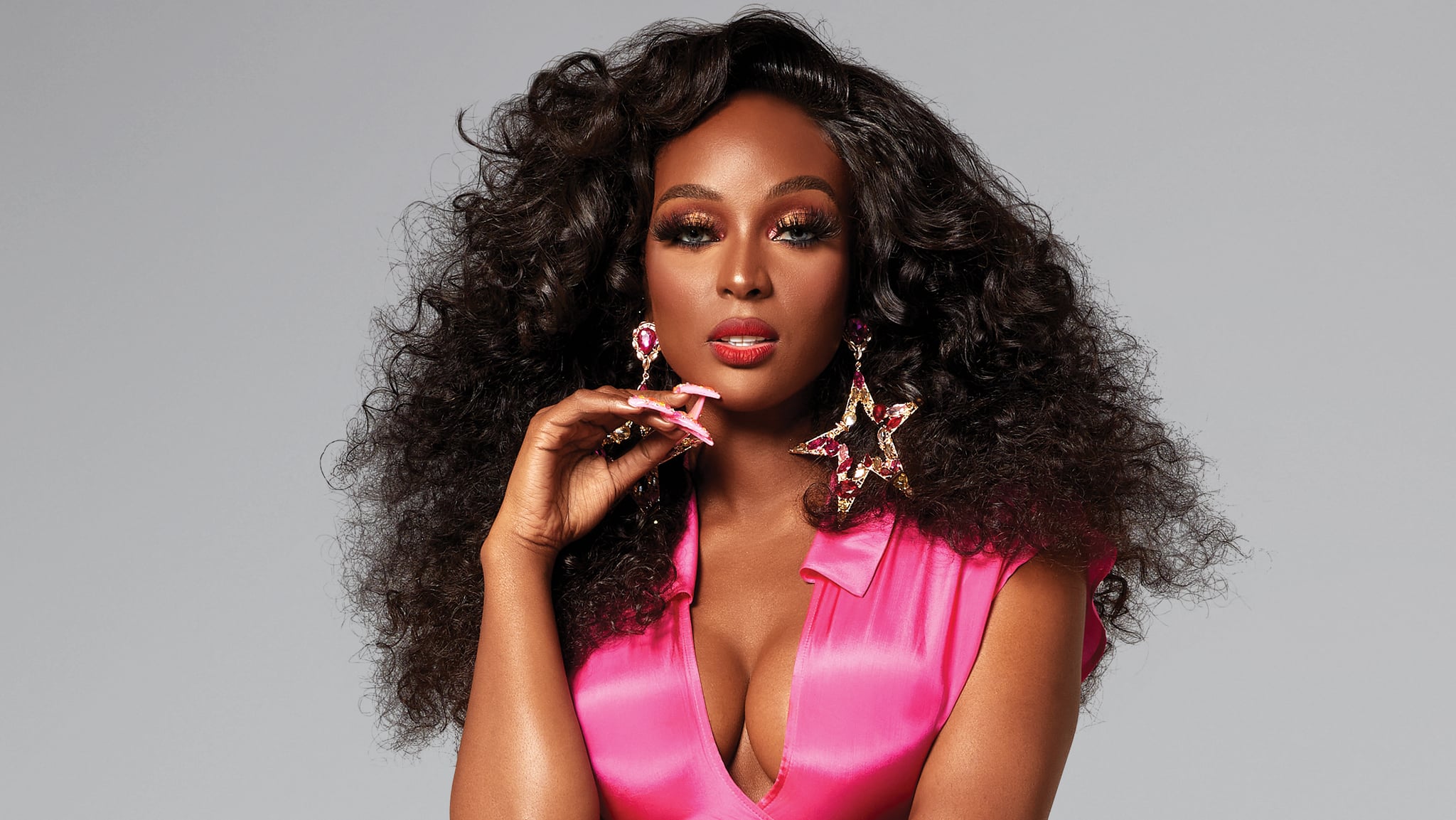 Amara La Negra is doing the most these days. Not only can we expect to see her in season four of Love & Hip Hop Miami, which returns on Monday, Aug. 23 at 9 p.m. ET/PT, but the Dominican-American artist who hails from Miami, FL, has been exploring quite a few new projects lately. Many of us first learned about Amara in 2018 with her breakout role on the reality show. The singer not only drew us in with her musical sound — which includes a mix of R&B, hip-hop, and reggaeton influences — but she also won our hearts with her commitment toward advocating for Afro-Latinx communities and boldly speaking out against the lack of representation, colorism, and anti-blackness that still permeates Latinx culture. While her activism and music career still take center stage (she also recently started a podcast with iHeartRadio called Exactly Amara), this renaissance woman has added a new venture to her plate — real estate. After weeks of teasing us on Instagram about the news, she recently announced on Instagram the development of her new real estate business, Amara Residences, in the Dominican Republic. But Amara isn't just trying to make business moves; she wants to inspire Latinas to build generational wealth.

Located in Las Terrenas in Samaná, Dominican Republic, Amara Residences features 48 apartments and 12 penthouses at the starting price of $175,200 for a two-bedroom, one-bath. Shortly after deciding to embark on real estate, she partnered with her real estate investor Allan Chavez of Soluciones Allan to develop Amara Residences. The two are not only business partners but have since become a romantic item — you can catch a sneak peek into their relationship on the new season of Love & Hip Hop Miami. Her mission behind it all is to build the generational wealth and financial stability the previous generations in her family couldn't provide.

Investing in real estate and homeownership is one of the best ways to build generational wealth in this country. In fact, according to the National Association of Hispanic Real Estate Professionals (NAHREP), more and more Latinxs are buying and investing in property with more than eight million Latinx new homeowners contributing $371 billion into that national gross domestic product. However, historical barriers still result in wide generational wealth gaps existing between Latinx and non-Latinx Black communities in the U.S. Not only are most Latinx and non-Latinx Black families less wealthy than typical white families but they are also less likely to own financial assets like homes. There are so many things that contribute to that from immigration status and low wages to historical legislation barriers like redlining and institutionalized racism. But this generation of Latinxs is understanding that in order to gain wealth for their families and generations to come, they need to educate themselves on financial literacy. They are understanding that financial literacy is crucial to our well-being. In order to truly be well, our finances need to be in order. Because struggling to pay the bills and being overwhelmed with debt isn't at all good for our overall well-being.

"I've always been a big believer in building generational wealth. I believe in being able to provide for my children, continuing the legacy, and breaking generational cycles," she tells POPSUGAR Latina. "I've really been into those things, knowing that I come from a poor family where, unfortunately, I wasn't able to inherit anything. I had to start from scratch. I want to be able to be smart about things. I was blessed with possibilities being born in a country where if you work hard, there are possibilities and opportunities, and I just believe that you can't put all your eggs in one basket. The entertainment industry is very unstable. Sometimes you're hot, and sometimes you're not."

The couple decided on investing in Samaná, a part of the Dominican Republic that's still relatively unknown to tourists and non-Dominicans, to help bring tourism to that part of the island and employ more Dominican workers. "My mother was born in Samaná. My family is from Samaná. It's a place where you can feel at peace. There are waterfalls, there are rivers, everything you can think of you can find there. It truly is a paradise," she says. "Not to mention, that Allan — my man — suggested that we do it there."

Amara's face lit up during our Zoom chat the second her new bae was mentioned. The two of them seem super enamored by each other in the show's new season and give off serious Latinx power couple vibes.

I love the fact that he's ambitious. He's as ambitious as I am. He dreams big. We are both very hungry for success. And we're very driven, and that is so important and the hardest thing to find these days because people want money and success the easy way.

"I love the fact that he's ambitious. He's as ambitious as I am. He dreams big. We are both very hungry for success. And we're very driven, and that is so important and the hardest thing to find these days because people want money and success the easy way,"she says. "There aren't a lot of people who are willing to work until 3 in the morning and put in that work. You don't find a lot of people like that, and when you do, it's a beautiful thing to build that empire together."

Speaking of empire, Amara is clearly working on hers while trying to encourage women of color — Latinas in particular — to get theirs by educating themselves more about financial literacy and investing in real estate. In season 4 of Love & Hip Hop Miami, we see Amara traveling back and forth from Miami to the Dominican Republic building Amara Residences. Amara admits to traveling at least once a month to the island where she usually stays for about two weeks out of the month working and decompressing with her long-distance boyfriend.

I do everything possible to encourage people — women and Latinas especially — to become financially educated; to not just think about today but to think about tomorrow.

"I do everything possible to encourage people — women and Latinas especially — to become financially educated; to not just think about today but to think about tomorrow. You're young, you're pretty, and you might feel youthful now, but 20-30 years from now, you might not have the same energy,"she says. "But at least if you were smart enough to invest in an apartment or in a house, not only will the value always go up but you know you'll have that money somewhere [rather] than if you were just spending hard-earned money on a Birkin bag or expensive things that are trending because that doesn't add any value to your future." She wishes that more celebrities, influencers, and people in positions of power would use their platforms to educate the youth — young people of color especially — on the importance of financial literacy and overcoming generational financial trauma. It's something our communities are in desperate need of and something this generation of Latinxs are finally in a position to take full advantage of.

Regarding her activism work, Amara doesn't plan on taking a back seat on that. She's still speaking up and advocating for Afro-Latinx representation whenever she can. In June, she appeared on a segment for BNC News where she opened up about the In The Heights controversy and how the film was just another lost opportunity to truly showcase diversity in the Latinx community. When it comes to the representation of Afro-Latinx communities in media, Amara feels like not much has changed since she started publicly speaking out about it.

It's because we're not commercially liked. We're not attractive in that way. If they are going to pick someone who is Afro-Latina, they'll pick the lightest Afro-Latina they can find. They don't choose someone who looks like me.

"It's because we're not commercially liked. We're not attractive in that way. If they are going to pick someone who is Afro-Latina, they'll pick the lightest Afro-Latina they can find. They don't choose someone who looks like me,"she says. "Listen, I love my afro. It's currently braided underneath this nice wig . . . because I understand as an artist, you're supposed to change it up, and I don't have a problem with that. But I want to see more people with my color and with my textured hair . . . I want them to showcase the diversity of the Latino community. We don't all look like J Lo. We don't all look a certain type of way. We're very diverse. It just sucks to consistently talk about defending who you are and in our own communities it happens, too — amongst Latinos, it happens, too. It's like coño, hasta cuando? How much longer do I have to talk about it to see a difference? Unfortunately, Amara is right. While diversity and inclusivity efforts are something many companies are working toward these days, there still aren't a lot or any films, TV shows, novellas, or programs with Afro-Latinxs playing the main roles. The change might be coming, but it's been moving slowly, and films like In The Heights, a film specifically about the Dominican community of Washington Heights, really missed the mark in truly representing the racial diversity that exists within our communities. But the good news is Amara tells us that we can expect to see more Latinas who look like her and her costar rapper Trina (who is half Dominican) on this season of Love & Hip Hop Miami. Of course, it's far from enough, but at least it's a start and something to look forward to. In the meantime, expect to continue hearing Amara talking about this because she doesn't plan on stopping until the change is finally here.