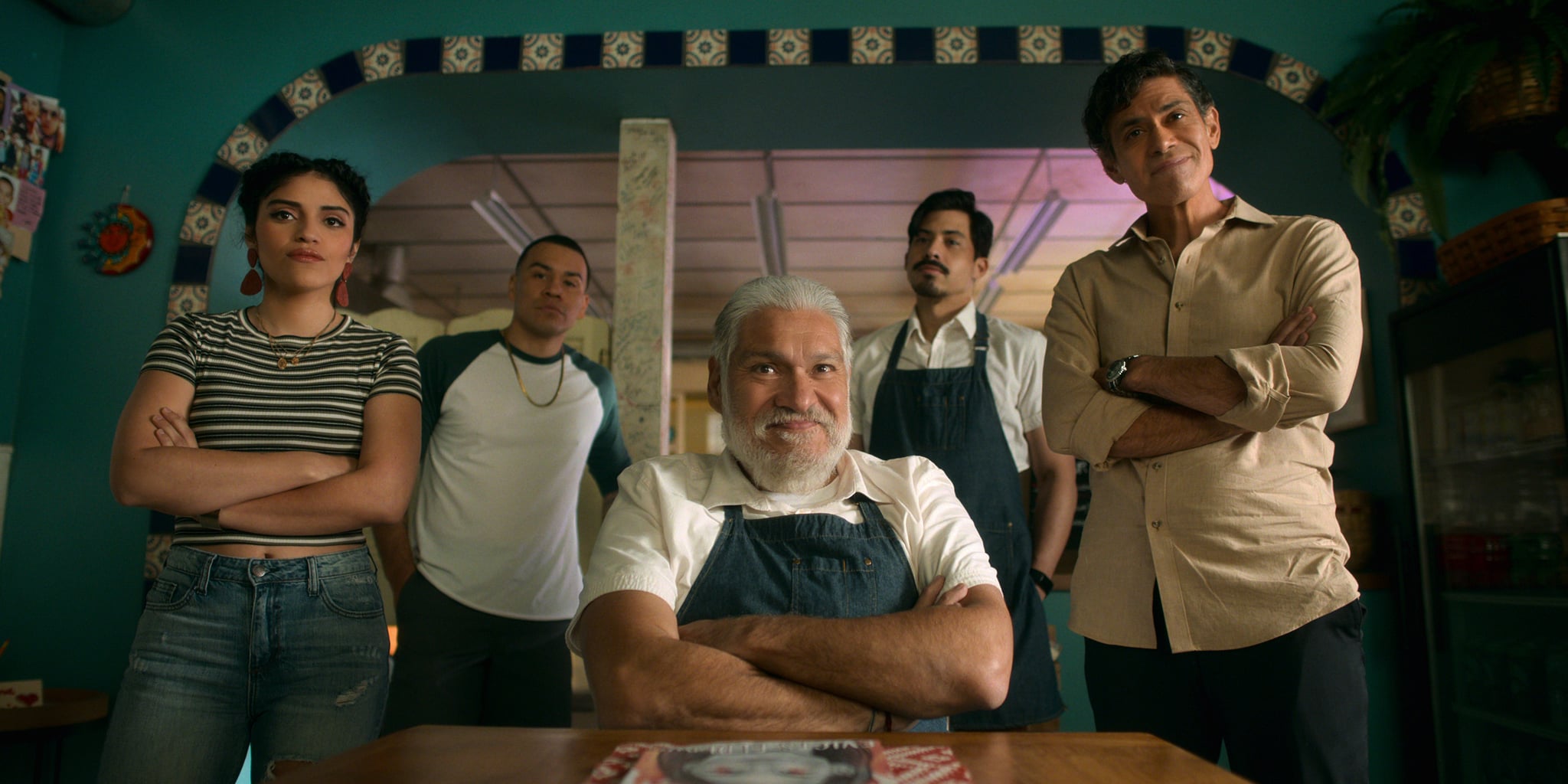 In the first episode of season two of Netflix's Gentefied, a recently-released-from-detention Pop calls himself an "illegal." His grandson Erik corrects him, saying: "you have to say indocumentado now." Pop doesn't take too kindly to that, and some hilarity ensues. But the silly moment speaks to way more. It begs the question of who gets to define Latino/a/x/a/é and immigrant communities?

The fact that this particular scene made it into the trailer for season two is very telling. Gentefied is clear in that it's very intentional about Latinx identity and particularly what it means to be Chicano/a/x, Mexican American. Remember the famous "Mexican test" from season one? In this scene, Chris tries to prove just how Mexican he is to his colleagues in the restaurant by passing a series of their challenges. It's probably the most written about scene from the first set of episodes because it shows exactly what Gentefied does best, which is explore what it means to be part of the Mexican diaspora within the states, with insight and humor. The very name of the show is about who we are as gente and how that's continuously changing and evolving.

By the end of the first episode of season two, Joaquín Cosío's character Casimiro has changed his tune. He's decided to fight to stay in the US, and that means using the "right" words: in this case, "indocumento." So does that mean Pop is growing into his power and sense of self? Is he adapting and aligning himself with the people and community that can help? Or is he giving up the control to define himself? It's a tension that runs through the whole second season, with Casimiro unsure where or how to draw the line on his self-determination.

To help make sense of the peculiarities of language, particularly the labels we use in Latinx communities, POPSUGAR Latina spoke with Dr. Olivia Garcia, affiliate faculty at University of Texas El Paso in Chicano Studies and a Criminal Justice/American Political Science Association Congressional Fellow. She reminded us that "words are powerful" and "language can be inclusionary as well as exclusionary. So while [language] can be a common way to identify those with similar life experiences, it can also isolate others and make it difficult to connect with those outside of a racial or ethnic group."

Where does that leave us? On the "illegal" versus "undocumented" question, the lines are pretty clear. As Dr. Garcia says, "no human being can be 'illegal,'" meaning being someone without papers doesn't make your whole existence "illegal." It just describes your relationship with a socially constructed border. Of course, the other looming question is how do we name our community as a whole? How do we choose between Latino/a/x/a/é, Hispanic vs. nationalities and more? Dr. Garcia explains that choosing identities can be empowering because it doesn't require living by other's standards. With that said, colonization can play a role, pushing folks towards terms like "Hispanic" because they align you with 1. Spain (since it literally means being from there or a place they colonized); or 2. The US, since it's a term made up by the US government.

On Gentefied, the quest to understand our identity (and who gets to define it) is central, even as the show moves beyond the words we use. Take the season two arc of Ana Morales (played by Karrie Martin). Ana is trying to figure out how to monetize her painting. We see her exploring how to use her huge Instagram following to support her art and help her community. Clearly, that's a big task and one that occupied her for a lot of the last season. In season two, she makes headway, landing a big deal with Nike (yes, they name names and even site their Kaepernick campaign). But once she sells her art, she loses control of it and how much good it does. Suddenly, her family and her community becomes debatable.

Chris Morales (played by Carlos Santos) finds himself in a similar situation. He doesn't know how to advance his culinary career. He finds himself on the fence about whether or not he should consider working for his new girlfriend or studying in Paris. Morales seeks to find his voice as a Mexican American chef from Idaho but is stuck for a lot of the season between bad choices, all of which involve compromising his identity or values. Without giving too much away, let's just say, he does figure it out. He eventually secures an opportunity that doesn't align him with the colonizers and gives him space to grow on his own.

Likewise, Pop struggles all season. He's uncomfortable with his grandchildren's methods in advocating for his legal status. He's also adapting to his new relationship, the first serious one since his wife (played in flashbacks by Queen of the South's phenomenal Veronica Falcón). He's trying to play the part of the model immigrant, but it feels false and frustrating. Still, arguably the most empowering moment of the season comes when he finally pushes back. In a big media interview, Casimiro declares "the fear is gone," and he is tired of trying to convince the public that he's a person. He makes it clear that he's done good things and bad things just like anyone else. But he knows he's not a criminal and that not having papers shouldn't be something that destroys his family.

Pop's fate does get decided in the finale, but our communities' identity remains unsettled. We haven't decided who we are yet, who's included and who's not, and what the defining features of our group even are. That's why shows like Gentefied continue to be so important. They help us debate who we are, who we want to be, and how we get there.