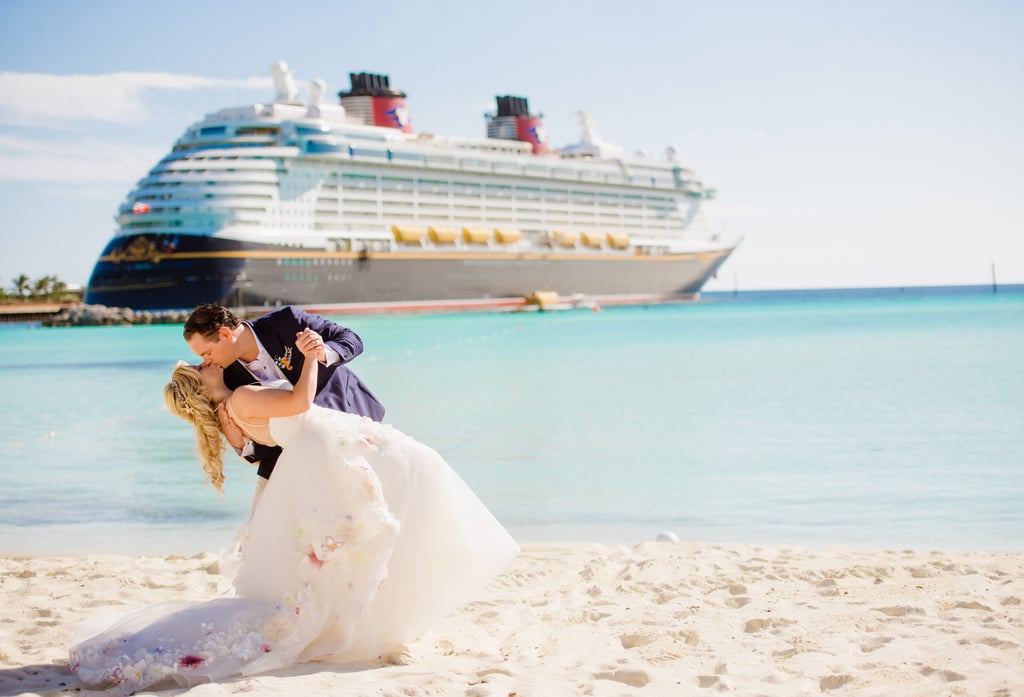 Five days aboard a Disney cruise, surrounded by 100+ family members and friends. A Little Mermaid-themed ceremony on a private island, and the magic of Disney woven throughout the whole affair. Welcome to Colette and Johnny's wedding week. The couple met because they both worked in the video games industry. At the time, John was the VP of Production on the video game "Disney Infinity" in LA, and Colette was working as a video games PR professional in London, but also blogged about video games on the side as a hobby.

Colette published an article about Johnny's video game, and the article caught his attention. He subsequently met her in London during a press tour and showed her the game in-person. The two connected very quickly, sharing a passion for video games and all things Disney.

"When we met, I knew she was the one. Colette is smart, creative, funny, hard working, a great talker, courageous, and drop dead gorgeous!" Johnny told POPSUGAR.

The distance between the two didn't stop them from falling deeply in love with each other over time. Despite the eight-hour time difference, the two made things work as best as they could. In February 2016, Johnny and Colette both took a four-day cruise aboard the Disney Dream and celebrated Valentine's Day together on Disney's private island, Castaway Cay. At the end of this trip, these two long-distance love birds decided that they would no longer spend time away from each other and would figure out a way to close the distance between them.

After Johnny and Colette took that fateful cruise on Valentines Day 2016 and promised to "close the gap," they started making plans for the rest of the year. One of the holidays that they had promised to spend time together was Christmas and New Year's — which Johnny secretly felt was the perfect time to propose to Colette!

Leading up to the proposal, both Johnny and Colette were so excited for the November 2016 release of Moana that they decided to use the backdrop of the film to inspire their holiday vacation together, and unbeknownst to the bride-to-be: her dream engagement!

Colette flew from London to Los Angeles on December 23, and the two headed to Tahiti and then hopped aboard a small prop plane and flew to the island of Bora Bora. After months of planning, on Johnny popped the big question on Christmas Eve. After their sunset dinner, Johnny took Colette to a small dock on the island where he got down on one knee and proposed to her . . . and when she said yes, an actual fireworks show he arranged went off.

"Fireworks kinda had to be a thing. Colette and I always stay for the fireworks whenever we are at Disneyland, so it was a must for this momentous occasion," said Johnny.

And as for the Disney Cruise wedding itself?

"Let's be honest — there was no other option!" said Johnny. Colette had always dreamed of having a Disney's Fairy Tale Wedding and Johnny knew from working at Disney that the couple and all of their guests would be in good hands aboard the ship. The two had taken that Valentine's Day cruise together a few years back when they had fallen in love, so they thought it only fitting to invite their friends and family to enjoy the same cruise they did.

"With over 100 of our family and friends aboard the Disney Dream for our wedding on Castaway Cay, we would describe it as an unforgettable and magical experience. It really felt like we were in a fairy tale," the couple said. "Disney over-delivered on every aspect of the wedding, and our guests and family were treated like royalty throughout the week. Every detail was perfect and the big day was topped off with a spectacular fireworks display."

The two were wed on Castaway Cay, and even took a "mini-moon" after the cruise, where they stayed at Disney World's Grand Floridian Resort and Spa. At 6 a.m. one morning, the couple put their wedding attire back on and headed to Walt Disney World's Magic Kingdom for their official Disney wedding photos outside the castle. It was a foggy morning, but the lighting only made the whole shoot even more enchanting.

"A Disney's Fairy Tale Wedding aboard the Disney Cruise Line is so special because it is a truly experiential event," Disney's Fairy Tale Weddings and Honeymoons told POPSUGAR. "We have found that our couples want to create events that reflect their personalities and also engage their wedding guests as active participants in the celebration . . . We love to create weddings that are unique to the couple and really celebrate their love story."

See their engagement and wedding photos ahead!

Related:
What It's Like to Get Married at Disney World (Spoiler: It's as Dazzling as You'd Expect)
Previous Next Start Slideshow
Walt Disney WorldDisneyWeddingDisney Cruise

Netflix
Jamie Lee Isn't Just The Wedding Coach: She's the Best Dressed Guest. Get Details on Every Look!
by Sarah Wasilak 5 days ago