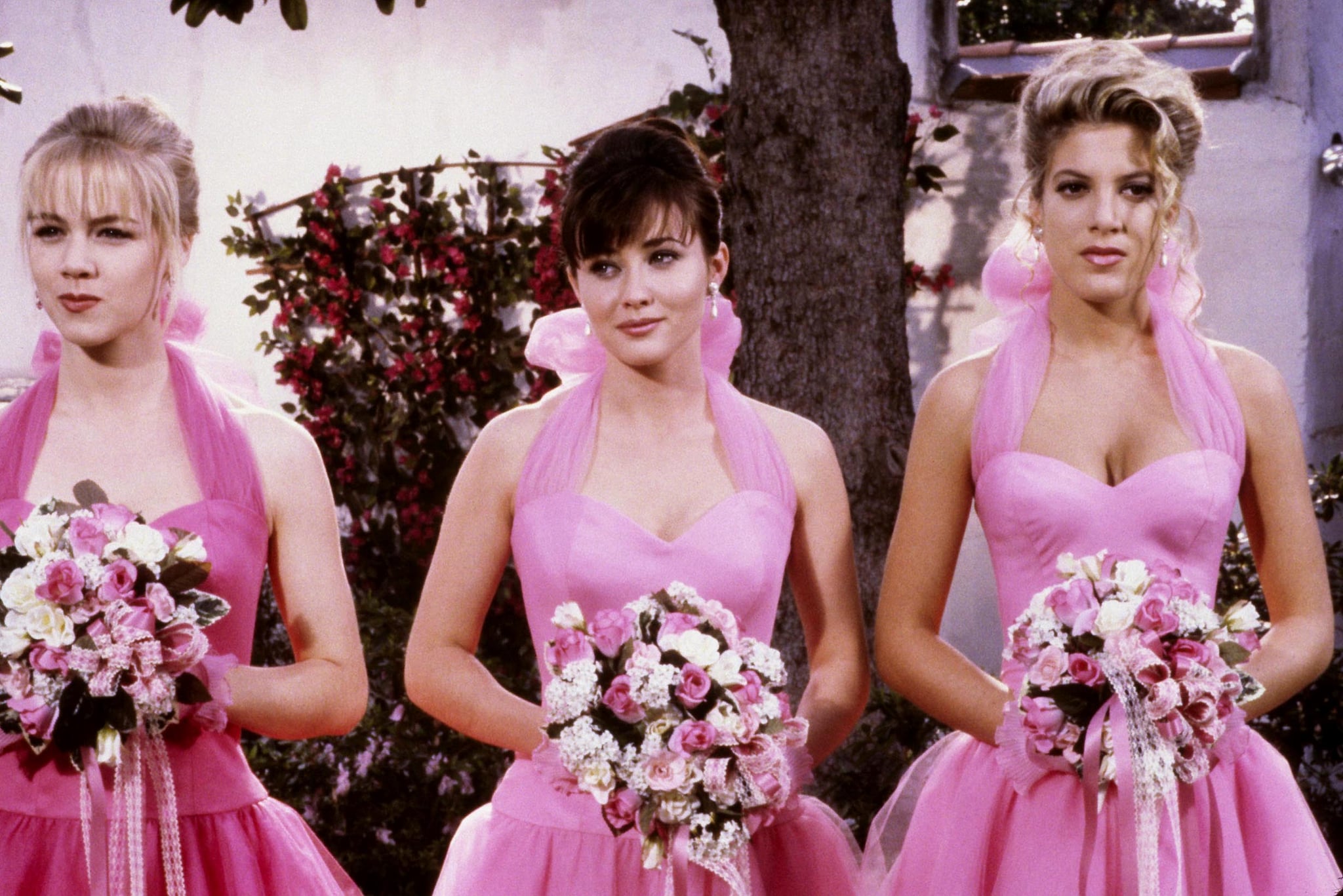 Whoever said that it's "better to have just a few close friends than lots of shallow friends" clearly never had to put together a bridal party with only two girlfriends.

When I realized my husband — then boyfriend — was probably going to propose soon, a wave of anxiety washed over me. Not because I didn't want to get married — I had wanted to marry him since our second date. The anxiety had more to do with the fact that I only had two female friends, while my boyfriend had an entire entourage of buddies. While he joked about "narrowing down" the options for groomsmen, I stayed up at night worrying about whether I could get a Real Doll to animate down the aisle behind me.

Even though I wasn't engaged yet, I knew that I needed to start making bridesmaid-worthy friends long before the engagement. I mean, who wants to be a bridesmaid for someone they just met? So I went on my hunt for new girlfriends.

Related:
My New Year's Resolution Is to Make New Friends — Here's How I'm Going to Do It

First of all, I should explain that I've never had much luck with female friends. I know what you're thinking. And the answer is no, I'm not about to say that girls are so much drama and so catty, and I just like beer and football and being "one of the guys" (all while wearing a crop top and eyelash extensions because, tee hee, girls are so jealous of how hot I am!). No. I am a girlie-girl, I hate football, and I don't think anyone is jealous of me. I'm just socially awkward. I probably talk too much about myself. I don't ask questions about where people are from or where they work, because I don't really care. I'd much rather hear about whether or not they secretly resent their mothers. I overshare. I go up to people at parties and ask them if they see a therapist and when they lost their virginity. It also doesn't help that girls bullied me throughout middle school until I switched schools — in 2002, my "best friends" voted me off their cafeteria table à la Survivor, and they literally said "the tribe has spoken" — so I go into any interactions with women with an underlying level of social anxiety. I suppose men don't find me any more palatable than women do, but I've never actively tried to find platonic male friends, so I wouldn't know.

My hunt for new female friends proved challenging. I felt like a struggling pickup artist who was one rejection away from going full neck-beard.

In any case, my hunt for new female friends proved challenging. I felt like a struggling pickup artist who was one rejection away from going full-neckbeard. I would go up to girls at bars, at parties, or at work, and try to get to know them, get their numbers, and "hang out sometime." My opener? "Oh my god, I love your top!" This quickly became very demoralizing.

A few girls in particular stick out to me. There was Debbie, a girl I met at a costume party in a hotel venue, who immediately traded numbers with me and said she wanted to hang out. I never heard from her until three years later when she emailed me asking me to ghost write her autobiography.

Then there were the many, many girls I met at house parties. I'd open with "Oh my god, I love your top," and often they'd trade numbers with me after having an hour-long drunken conversation over a bottle of Trader Joe's chardonnay. I'd text them the next day to say it was great meeting them, they'd say "oh my god, me too!", then I'd text them later that week to see if they wanted to go out that weekend. They would never reply.

Sometimes I couldn't even get a number. I met a girl around my age at my gym who lamented being new in town and having such a hard time making friends. Figuring this was some kind of hint that I should befriend her, I asked for her number and said I'd be happy to show her around the city. She gave me a fake number.

Occasionally, I got a little farther than a number. I had more "first dates" than I can remember. They never went badly (at least not from my end), but they also never resulted in a second date. Only repeated texts that, "We have to do that again sometime, but so busy!"

At this point you are probably thinking, "Why go to all this trouble? So what, you had two friends. Just rock those two friends in your mismatched wedding party and embrace being weird!"

Here's the thing: no. I would not succumb to defeat and admit that I only had two friends. It was just too humiliating. And I had endured enough humiliation in my life already to not want my wedding to be a continuation of that. Even my boyfriend seemed a little embarrassed. He would egg me on in my hunt, point at random girls at parties and say, "She seems like a good potential bridesmaid!" Maybe a part of him was afraid that if I didn't make more friends — and fast — he'd have to drop all but two of his friends to be his groomsmen. I wanted my wedding to be the best day of my life, and I had a feeling it would be marred with embarrassment if the dark cloud of, "You only have two friends, and they're both closer with other people than they are with you," loomed over me the whole time.

Related:
What Is the Ideal Number of Bridesmaids? A Wedding Planner Weighs In

As it turned out, my hunt for new female friends was completely fruitless. I eventually did make another close friend (who I still consider close), but she was actually someone I had met right after graduating college, years before my bridesmaid hunt. I just never made any effort with her during that time, because I assumed she was too cool to want to hang out with me. As it turned out, she wasn't. Unfortunately, we had only just became friends when I got engaged. At my engagement party, I pulled her aside and asked her if she wanted to be a bridesmaid. I told her that I knew we weren't that close, but I had a feeling we would be very close someday. She declined — boy, was that awkward for both of us — but years later she jokes that I had the right hunch about our friendship all along.

By the time I actually got married, I'll admit that my bridal party didn't really look how I wanted it to. I only had four bridesmaids, which meant my fiancé had to cull people from his lineup. (I only hope he didn't tell the disappointed gentlemen why: "My bride is just really unlikeable!") Realizing that I wasn't actually anybody's "best friend," I made my younger brother my maid of honor, because when it came down to it, I was closer with him than any other eligible friend. (He even attended the bachelorette party and partook in all the bridal activities, but drew the line at attending a pole-dancing class.) I also added my cousin as the fourth bridesmaid. Even though we weren't always in regular communication, she wound up being an awesome, supportive bridesmaid and a fantastic wedding planner to boot.

What I didn't realize was how facing my "fear" head on — having a very small bridal party with only two people not related to me — would make me so much more comfortable talking to other women. After my wedding, I no longer had a specific goal when I met a woman. I could focus strictly on whether or not we actually had anything in common, instead of imagining whether this person I just met would be OK with wearing pastel yellow or if she'd request a more flattering color. Now, several years out since my wedding, I'm still not everybody's cup of tea (just the other day I asked a stranger at a party if they ever wanted children), but I have a deeply satisfying spectrum of female friends. I'm not strictly focused on the amount of friends anymore, but I finally have more than two, so that's nice.