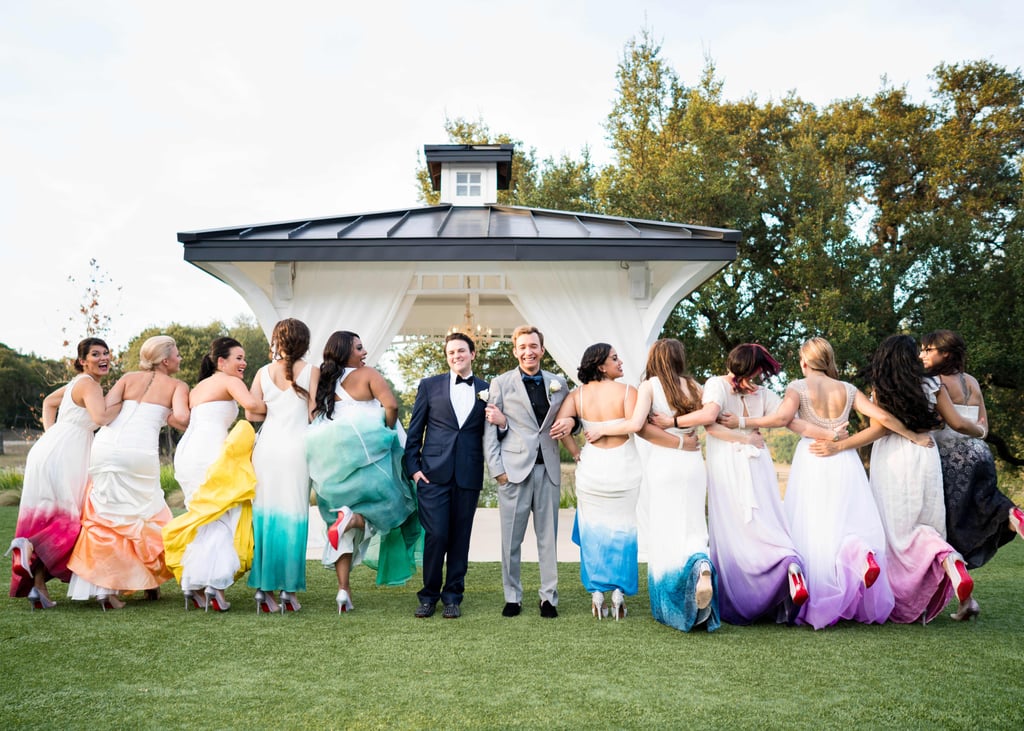 This Couple's "Rainbow"-Themed Wedding Has a Sweet Backstory — and Check Out the Bridesmaids!

When Ben and Michael were ready to say "I do," they went all out and planned a gorgeous wedding that incorporated their love story in a totally unique way. You see, the pair picked out five songs, each encapsulating a significant period in their relationship, starting with Lady Gaga's "LoveGame" and ending with Kesha's "Rainbow." Here's their love-story playlist:

"LoveGame" by Lady Gaga: "Cupid played a game that would take five years in the making. After two years, Cupid decided to shoot an arrow at a concert in Houston, TX, featuring Lady Gaga. We had just begun talking via OkCupid, and our future maid-of-honor pushed us into trading numbers, which led to our first date."

"Yoü and I" by Lady Gaga: "Like most first dates, we both were a little awkward until we both expressed our mutual love for music and how it brings a smile to your face even when having a bad day. Our dates continued, ranging from picnics on the floor of a college dorm room to the floor of our first apartment together and eventually to the picnic where the proposal occurred."

"Don't Stop Believing" by Glee Cast: "On June 27, 2015, the United States Supreme Court legalized same-sex marriage. What we once thought would never be suddenly became a reality. It was a birthday present for both of us as we celebrated at Houston Pride."

"Welcome to New York" by Taylor Swift: "With the debut of The Great Gatsby, the concept of elegance and love was an eye-opening idea of exactly how we wanted to plan our wedding."

If you're already swooning, then brace yourself, because the reason they chose Kesha's "Rainbow" to be the song that represents their wedding day is absolutely touching:

"Six years after Cupid played his game, we came together with family, friends, and loved ones [in Boerne, TX]. Just as God places rainbows in the sky so we may see the beauty of all [the] colors after a storm, we were granted our own rainbow. Now we look to the sky without any limit and seek the good things in life."

The two also incorporated the rainbow in their bridesmaids' dresses. Each ombre gown was dyed with a specific color from the rainbow, so when they all stood together, they made a perfect rainbow. These intricate details combined with photographer Shelly Beck's fantastic artistic eye led to breathtaking wedding photos.

See the amazing pictures from their wedding ahead!

Related:
Every Single Guest Dressed as a Disney Character at This Picture-Perfect Wedding
Previous Next Start Slideshow
WeddingReal WeddingsWedding ThemesLGBTQ+

Identity
What to Know About Top-Surgery Scars, According to Plastic Surgeons
by Casey Clark 11 hours ago