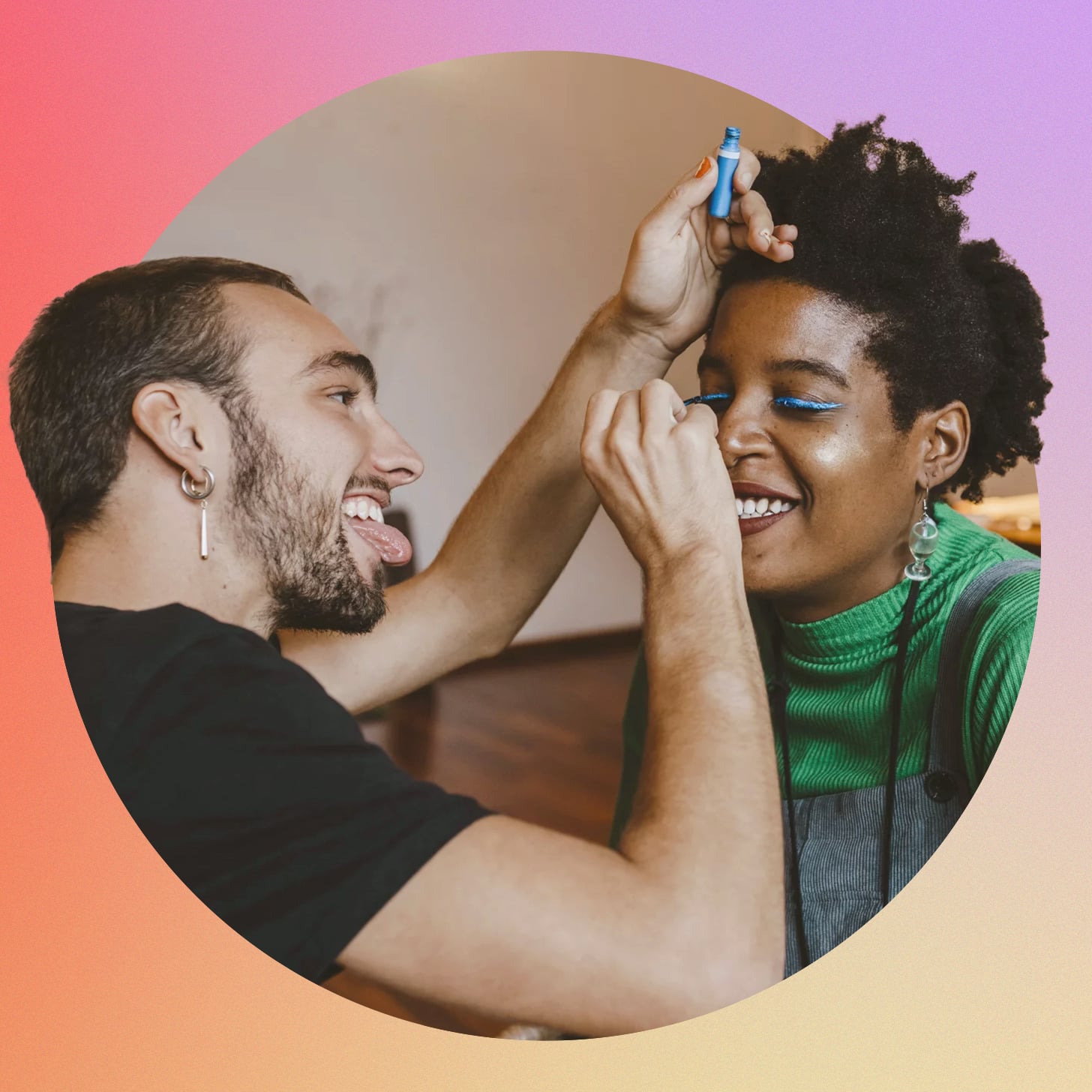 As I ran down the stairs to the L train platform at Union Square, I saw her already standing there, scrolling on her phone. I arrived just in time to watch as our subway pulled out of the station on its way to Brooklyn without us.

"I'm so sorry!" I said. Like always, I was late. She waved off my apology and offered a hug. "Wow, I forgot how tall you are," she said, laughing.

"How have you been? I haven't seen you since Pride!" I responded in that high-pitched voice I only use when I'm nervous or meeting a stranger; this was a little bit of both. I hadn't seen Ash in five months, when I ran into her and her new girlfriend at a lesbian bar in downtown Manhattan. Before that, we'd been in a situationship.

Whether or not exes can be friends is a topic that gets a lot of attention, and often the consensus is: absolutely not. Classic sitcoms like "Friends" and "How I Met Your Mother" portray the pitfalls of being friends with an ex, whether it's the inability to handle jealousy (cue: Ross and Rachel) or being stuck in an endless cycle of getting back together again (again, Ross and Rachel). But in the queer community, staying friends is a lot more common.

"Staying friends may mean you protect an important relationship in your life, even if the context of the relationship shifts."

The tendency for exes to remain or later become friends in queer communities is so widespread that writer Rachel Komich aptly named it "queer uncoupling," a play on the term "conscious uncoupling," which was first coined by marriage and family therapist Katherine Woodward Thomas. Komich defines queer uncoupling as seeking a better future for the relationship, whatever that may look like for the people involved. "The thing I love most about being queer is that there are no rules. . . . When I realized I was queer, I stepped out of a heteronormativity-induced fog," Komich wrote for queer newsletter Salty World. "Possibilities for who I love and how I love them became endless, and 5 years later, I learned that this same concept goes for how I choose to stop loving people."

There are countless examples of queer uncoupling on TikTok. Take content creators Avery Cyrus and Soph Mosca, for instance. After booking a nonrefundable trip to Europe while they were dating, the two decided to go together even after what was, by all accounts, a pretty contentious breakup. It was a controversial decision to say the least — the announcement of their trip alone brought in nearly 4.4 million views on TikTok and generated comments like, "Couldn't pay me to do this. I'm so sorry I'd take the loss and I'm poor." (For the record, now that they're on the trip, more people are rushing to their defense in comments.)

And while it's possible Cyrus and Mosca were simply making the best out of a nonrefundable deposit, maybe they were starting the same journey so many queer celebs and normies have taken before them: the well-worn path from exes to platonic buddies.

Why Queer People Stay Friends After a Breakup

There's a reason queer couples may be more likely to choose to remain friends after a split. Within lesbian and queer communities, staying on good terms with those you've dated is more common largely because the communities are a lot smaller, even in major cities. (Consider the fact that there are only three lesbian bars in New York City, for instance. It's not a big surprise that I ran into Ash and her new partner at one of them.) Often, we simply don't have the luxury of cutting off exes.

"Queer community is powerful, and losing a connection with another queer person may feel like a heavy loss," says Leah Goodman, OTD, OTR/L, a queer-identified educator and therapist for The Expansive Group. "Queer folks may feel some pressure to be friends with exes to maintain harmony within their larger community or may be actively trying to preserve a meaningful queer relationship in their life."

It worked for exes Hayley (28) and Vanessa (29), who say maintaining a friendship wasn't necessarily conscious or intentional. "I didn't question whether or not Vanessa and I would remain friends [after our breakup]," Hayley says. "I think we both just acknowledge that life happens, relationships can be a lot of different things, and we just genuinely love each other."

Their relationship has changed, of course. They see each other less often than they did when they were dating, for one. "It ebbs and flows," Vanessa says. "But we still go on trips together and try to see each other pretty often, just the two of us as well as in groups."

How to Transition From Exes to Friends

Often, the evolution just happens. A few weeks or months after your breakup, you see each other while out or someone DMs the other an inside-joke-y meme, you start talking, more time goes by, and — bam — you're friends. But there are common pitfalls many people make along the way, and the following steps can help you avoid them.

Dr. Goodman says staying friends with an ex requires self-reflection and emotional honesty about your intentions, hopes, and needs.

Much of this self-reflection might happen intuitively, without you having to consciously sit down and think about it. But if you aren't sure whether staying friends with an ex is the right choice, Dr. Goodman suggests asking yourself the below questions:

If you answer yes to any of the first three questions or negatively to the last question, you may not be ready for friendship. While this could change in the future, it's important to honor where you're at now.

A cooling-off period is often a good idea. "After [Hayley and I] broke up, I needed some space to grieve and process the relationship," Vanessa notes. "But after reaching back out and hanging out again, it felt like we had just picked up where we left off."

While every relationship is different, distance can give perspective. Trying to befriend an ex immediately post-split can be "like trying to move a boiling pot immediately after you turn off the heat — it may be helpful to step away from the stove and let it cool down before engaging," Dr. Goodman says.

Again, it comes back to being clear about your motives for pursuing friendship. "Some people may stay friends with an ex because it prevents them from having to sit in the full depth of their grief," she explains. "Other people are deeply rooted in their shared routines with their partners and struggle to disentangle them when the romantic relationship ends. But sometimes it's about logistics, like coparenting or maintaining harmony in a shared friend group."

Distance can help you grieve, heal, and re-enter the relationship with clarity and honesty, giving your friendship a better shot at working long-term.

Speak Up and Listen

When thinking about being friends with an ex, people often focus on their own readiness. But a friendship is a relationship that involves more than one person. And as such, Dr. Goodman says that communication and consent is vital when trying to form a platonic relationship with a former partner.

"Initiate a transparent conversation about the type of friendship you're hoping for and discuss whether that's something they're interested in," she suggests. This is also a good time to define boundaries. If you or your ex needs time without contact before making a decision on a possible friendship, for instance, that should be honored. If it isn't, consider it a red flag.

Be Honest and Gentle With Yourself

You may never be ready to be friends with your ex. If that's the case, it doesn't make you a bad person. "Sometimes we assign meaning to being friends after a breakup," Dr. Goodman clarifies. "We think it makes us more mature, evolved, or strong if we maintain friendships with former partners. But the strength isn't in forcing yourself to be friends if you're not ready or if it's harmful to you; the strength is in validating and honoring your needs, even if that means cutting off all contact."

Queer people in particular may feel pressure to remain friends, in part because they're afraid of losing their community if they don't. But no one should feel obligated to remain friends, especially if their ex hurt them. Yes, you may wind up seeing each other socially, but that doesn't mean you have to maintain a personal relationship.

Looking back, my get-together with Ash was something of a test: would we mesh as friends, or did we no longer have a foundation without our situationship? Together, we took the next train to The Woods, a Williamsburg bar that held a weekly queer dance party on Wednesdays. Although weeknight drinking didn't align with my new bedtime routine, we both craved the community that sometimes only a gay bar can bring.

It didn't take long for her to bring up that she had recently broken up with her girlfriend. The consoling turned into hyping each other on the dance floor: "This is totally your song!" we yelled over Avril Lavigne. Which then followed with me cheering her on when a friendly stranger bought her a drink. Soon any strangeness left over from the gap in time since our last meeting dissipated.

We shared a cab home, talked about the crushes we had on new people, and giggled over the funny, awkward moments we had when we were still sleeping with each other (LOL). It reminded us of the initial reason we spent time together — we liked each other! We want the best for each other. And isn't that what friendship is all about?

Sam Smith
Sam Smith on the Roller Coaster of Changing Their Pronouns: "The Amount of Hate . . . Was Just Exhausting"
by Joely Chilcott 4 hours ago