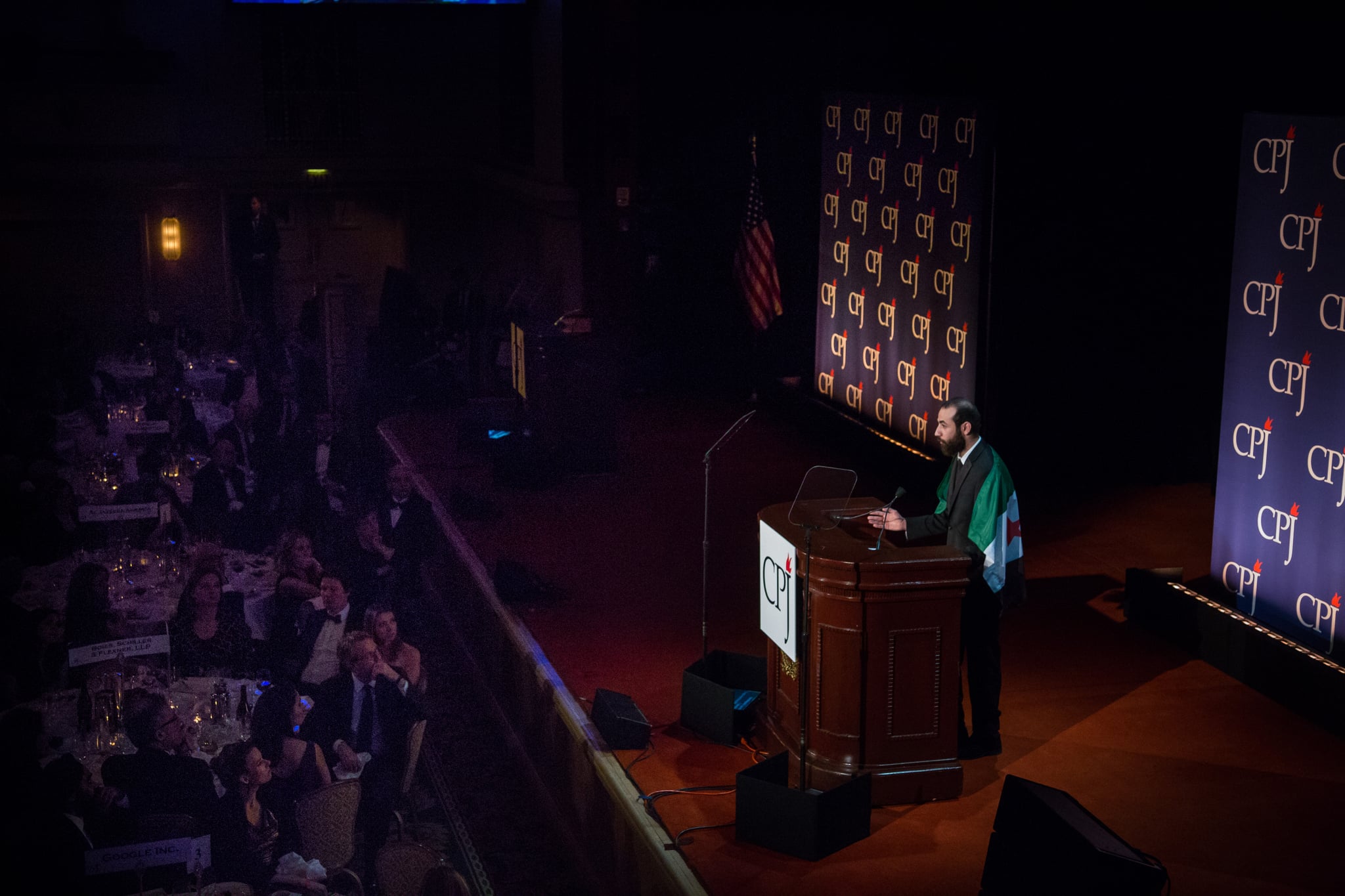 There's a piercing moment toward the end of Matthew Heineman's documentary City of Ghosts that's difficult but necessary to watch. One of the film's subjects, Aziz, breaks down — violent in his shuddering — as he recounts the atrocities ISIS committed against his family and his Syrian home, Raqqa; his pain is so palpable, the viewer is nearly transported to the room where he sits in Berlin, Germany, following a harrowing escape from the city. When we spoke to him in April, Heineman described the scene as a depiction of "the cumulative effects of trauma."

Heineman's film begins at a culmination of sorts. Aziz and his fellow members of Raqqa Is Being Slaughtered Silently — which began as a group of citizen journalists documenting the ISIS reign of terror in Raqqa — accept an award for their extraordinary efforts.

In Raqqa, the descent from anti-Assad liberation to ISIS-held stronghold occurred over a matter of months. Once Syria's sixth-largest city, by 2016 Raqqa's governance had changed hands from one dictatorship to another: after the Free Syrian Army captured Raqqa in March of 2013, the newly occupied city almost immediately encountered threats from the then-strengthening Islamic State. By the beginning of 2014 ISIS had captured the once-bustling city and declared Raqqa the caliphate's capital.

As the Islamic State began terrorizing the city with public crucifixions, strict imposition of Sharia Law, and unfettered violence against Raqqa's residents, a group of young citizens recognized the necessity to show the world the caliphate's atrocities. They were students, teachers, and regular citizens who had just witnessed their city's capture. Compelled by the lack of international exposure to ISIS's crimes, six people led by Abu Ibrahim a-Raqqawi (a pseudonym) launched the Facebook page called Raqqa Is Being Slaughtered Silently (R.B.S.S.).

Documenting ISIS's cruelty proved to be increasingly difficult from within the city, but the group garnered international awareness for its citizen reporting. They were committed to publishing an accurate portrayal of life under ISIS that would simultaneously contradict the caliphate's Hollywood-production level propaganda. But their attention was double-edged: ISIS now had an enemy within Raqqa to hunt.

Soon after the Facebook page took off, ISIS began targeting R.B.S.S. members. Those who were able to escape fled, though they remained a resource for people within Raqqa to continue recording ISIS's terror and funnel it to the group through secure channels. R.B.S.S. continues to be a valuable source of reporting in Raqqa, which is presently under siege by an American-led coalition to retake the city.

Heineman, director of the Academy Award-nominated Cartel Land, read David Remnick's story about R.B.S.S. in The New Yorker back in 2014 and promptly contacted members of the group about chronicling their story. "Two of them happened to be in the States and I met with them and told them what I wanted to do," Heineman told POPSUGAR. "They said 'let's think about it.'"

"They decided to do what they were doing, they made a choice. So they became citizen journalists."

Remnick's article was published in November 2015; by July 2017 Heineman had produced City of Ghosts, a documentary which follows R.B.S.S.'s operations after many group members were forced into exile or executed by ISIS. Heineman provided us with insight about the film's creation, the new conflict engulfing Raqqa, and his experience getting to know the activists who started R.B.S.S.

Heineman spent nearly 10 months filming and "getting to know" the group. Their close relationship is evident: Heineman captures intimate moments of both turmoil and elation. "For me that's they key to the films that I want to make and hope to continue to make," Heineman said. "Films that are really intimate and visceral."

And the film is abundantly visceral: the viewer watches how members of R.B.S.S. unite to defend their city, but are eventually forced to flee as their work proves more and more valuable.

A central element, though largely undiscussed, is the role social media plays both in allowing R.B.S.S. to tell their story but also as a tool for ISIS to hunt and threaten its members. Social media is undoubtedly a double-edged sword, but ultimately it's portrayed as an avenue for connection and platform to deliver vital information. It's also a potent mobilizer of people. "This group rose up and gained attention with the same tools that we all carry with us every day," Heineman explained. "Our cellphones, computers, Twitter, Facebook."

Heineman's ability to depict some of the world's most pressing and relevant issues without directly analyzing them is impactful: he shows facts and encourages the viewer to react. City of Ghosts is not just a story about ISIS's cruelty, it's also a depressing picture of the savagery refugees encounter when they are supposedly safe.

"It became an immigrant story [of] finding oneself in a foreign land [and] rising nationalism in Europe," Heineman said. "These guys have been through so much, through unimaginable horrors and then to arrive in this place where they're 'safe,' but arrive to this atmosphere of Neo-Nazis marching through the streets of Berlin."

"Unfortunately these guys will have a job for a long time to come."

It has not gotten any easier for the citizens of Raqqa since City of Ghost's production. Raqqa is quite literally at the center of a battle between ISIS, Syrian rebels, Assad's forces, and a coalition of other countries whose allegiances also vary. But as Western nations wage a complex war to retake Raqqa, it's the people who suffer. "As always the only real losers in this situation are the citizens of Raqqa who, for the most, part want peace and freedom," Heineman said.

If or when ISIS is eventually dispelled from the city remains unknown. But R.B.S.S.'s work won't be done until the ideology that propels ISIS — and its fear-mongering predecessors like Al Qaeda — is beaten. "For them, even if ISIS gets taken out or forced out of Raqqa, unfortunately these guys will have a job for a long time to come," Heineman stressed. "Exposing this extremism. Exposing this perversion of their religion that has happened not just in Raqqa but all across the world."

City of Ghosts is beautifully produced and edited, but it's agonizing to watch on more than one occasion. Maybe that is the point. In the modern news cycle where we are so desensitized by violence, constantly being fed tragedy as fodder for the airwaves, victims become numbers instead of real humans with real emotions. The horrors that Aziz, Hamoud, Muhammad, their fallen partners, and their fallen family members encounter are raw; their experiences are not cut to fit the demands of cable news; their stories are not transient photos of tragedy that are widely circulated for a few days then forgotten. And you will remember them, because Heineman's greatest achievement in the film is compelling the viewer to recognize how quickly one's reality can descend from relative normalcy to horror.