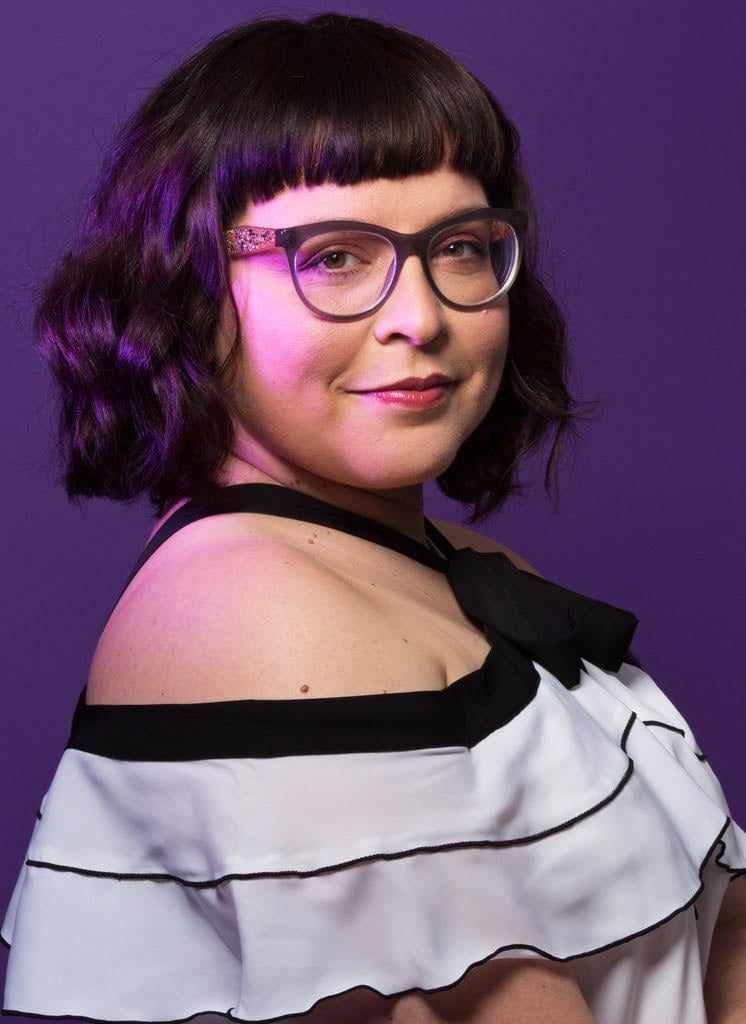 If you're having any trouble maintaining your enthusiasm for politics lately, let me introduce you to Jess Morales Rocketto. The organizer, advocate, and one of the cofounders of nonprofit Supermajority is gearing up for the organization's Supercharge: Women All In event on Saturday, Sept. 26, and she is amped. "I love a good pep rally, and this going to be like the best election pep rally there ever was," she told POPSUGAR.

"You gotta eat your vegetables, you gotta exercise, and you gotta do some phone banking."

That pep rally — which boasts big names like Sen. Kamala Harris, Jane Fonda, and Eva Longoria — is part of a seriously ambitious goal: to get one million women involved in sending texts, making calls, writing letters, and "putting it all out on the line" to get out the vote this year. And if anyone is putting it all out on the line, it's Rocketto. She's worked for Hillary Clinton and Barack Obama's presidential campaigns and the Democratic National Committee, and in addition to her role at Supermajority, she is currently the civic engagement director of the National Domestic Workers Alliance and executive director of Care in Action. (Whew!) But the whole point of Supermajority, which is laser-focused on mobilizing women to activism and voting, is that you don't need to have a political-science degree or a stacked résumé in government to make a difference. You just need life experience, passion, and the right tools.

"What I don't want people to do is wake up on the morning in Nov. 4 and know that they could have done something and they didn't do it," Rocketto said. "And I think in 2016, a lot of people woke up feeling like that." If you were one of those people — or just want to help prevent more people from feeling that way in 2020 — read on. Rocketto's take on maintaining hope, preparing for this uncertain Election Day, and why making phone calls to voters from your living room really does have an impact is the dose of motivation we could all use right now.

POPSUGAR: Every day, this election just feels ever more critical, and so many of us were deeply impacted by Ruth Bader Ginsburg's death. As an activist, advocate, and just as a human being, how did that impact you?
Jess Morales Rocketto: Multiple times a day I get asked, "How do you stay hopeful?" I think that sometimes people think I'm going to give, like, a grand, inspirational speech. But actually, I think it's just doing what RBG did: every single day, getting up and doing what it takes to continue to play the role that you were meant to play. In her case, it was Supreme Court Justice. I think for most people, it's going into the text bank and texting your little fingers off. Making a few phone calls, even though you're really introverted and it kind of makes you uncomfortable. Having a conversation about who your mom — who you love dearly, but is also very conservative — is voting for in the election. In [RBG]'s case, it was writing badass dissents of terrible Supreme Court decisions or getting in that workout so she could stay in top shape. That, to me, is just so inspiring.

PS: You've been at this work for a long time. But have you been surprised at your ability to be newly radicalized and galvanized over the last four years?
JMR: The answer is yes, constantly. I worked on Hillary Clinton's 2016 presidential race. It was the honor of my life. And every single day since then, I have made a choice to wake up and try to reverse that loss. It was so painful. Sometimes people think grief goes away, the farther away the traumatic thing happened. But actually, for me, the grief increases the closer that we get to this [election]. Because I don't know how else to say it — this one is for all the marbles. There has never been a time in our country's history where it has mattered so much, where the threat of the destruction of our democracy was so present.

PS: I think that's really helpful to hear, because I think some people are under this illusion that organizers and activists have some sort of secret to staying hopeful.
JMR: I'm a person who interacts with the very worst parts of our administration and what they're doing on behalf of our government. It's very difficult every single day. It requires incredible resilience. And also it's very painful, all the time. And at the same time, my number one job is to stay hopeful and to try to transmit that hope into other people. I truly believe that's core at what an organizer does. So if I can do it, anyone can do it. Because most people don't get up close with children who have been separated from their families. Or to tell a room of a hundred people the story of their abortion, which I have done many, many times. And so it is deeply involved and personal. I cry, as you see, in every interview that I do. And part of that is because it is hard to do this every day, all the time. I don't have some secret superpower. It's just a choice that we're continuously making.

PS: You started Supermajority as a grassroots, tell-your-friends sort of effort, albeit with some ambitious goals. What's something that's surprised you, or been refreshing or unexpected, as it's grown to what it is today?
JMR: I'm really excited that there are people who want to engage their community but also want to understand how to do it better. That is totally, totally awesome. And when we started building this, we had a vision as a multigenerational, multiracial community. And I think we have seen that come to life. It's awesome to have the 75-year-old lady who's been at this since she did it in the '60s. Then we have a 25-year-old Black woman from the South who's just getting into this and learning. I think both of those people sharing and learning from one another refreshes me so much. Because there is a lot for each of those people to learn and share. And I feel like I am learning and sharing right along with them.

PS: People sometimes get intimidated by making phone calls or even text banking. Are there any stories where people did it and it paid off in some rewarding, tangible way that you can float out there to inspire people?
JMR: Yeah. I will tell one of my best phone banking stories in my whole career. So on election night in 2010 — which was a very tight election — I was making calls into, believe it or not, Alaska. We were in the final, truly 15 minutes before polls close. And we're just leaving it all on the line, calling every single possible voter. I get on the phone, woman picks up, and I'm like, "Hey, have you voted yet?" She's like, "Actually, I haven't voted." I'm like, "Well, polls close in 15 minutes. You know that we're in a very competitive race and you are an important voter in this election." And she was like, "You know what, you're right. I could get there if I leave right now. But it's about 15 minutes away." And I was like, "Get in your car. I will look up your polling place. Walk to your car right now." And she did. She called me back later, very late at night. I picked up because I immediately recognized the Alaska number, and she was like, "I voted. I had to wait in line for a little while, but it was totally worth it." If you ever wondered, does it make a difference? It absolutely does make a difference. People will go to vote because you called them.

PS: I think people sometimes overestimate the work that other people are doing and putting in. But if you don't do it, who do you expect to be the person to do it? Right?
JMR: Say that 100 more times for the people in the back! It's true. I do think everybody thinks that somebody else is doing it. And the answer is, there are no saviors. No one else is going to do it for us. You gotta eat your vegetables, you gotta exercise, and you gotta do some phone banking.

PS: Looking forward, there's a lot of anxiety around all the potential outcomes of the election, and with mail-in voting, what that might mean for the election results being stalled. Is there any sort of message you're trying to get out to steel people for that, or to anticipate how we can continue this fight?
JMR: We'll definitely be discussing a little bit of that at the event on Saturday. We want to make sure people understand how to spot misinformation and have been doing a lot of training on that. One of the things that, to me, feels just so important to say to other women of color is: You can absolutely make the difference in this election, and you don't need a PhD to go out and vote. You have everything you need. You know about the issues because you experience them. You know about who it affects, because it is us. And voting could be hard. You may have to wait in line, you may have to make sure that ballot gets in — but it's 100 percent worth it.