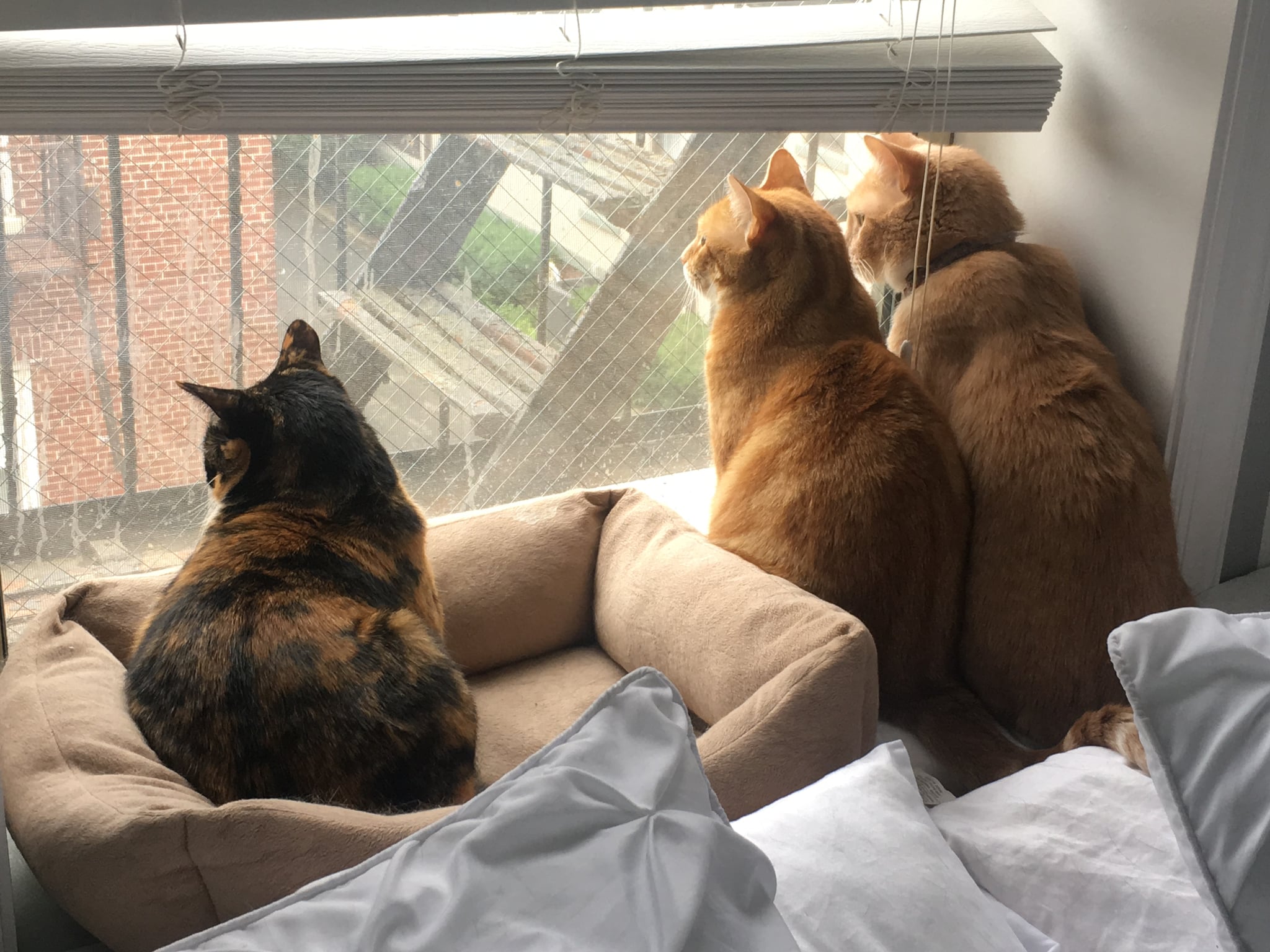 As someone who fancies themselves to be a full-blown pet-lover, I never found it strange that over the years I've always had multiple names for each of my pets. Sometimes they do something funny or just have a particular disposition that lends itself to a brand-new nickname. Although harmless to the animal — aside from maybe confusing them a bit initially — referring to my cats and dogs by various monikers certainly raises some eyebrows, not to mention baffles the hell out of people. But alas, I love my collection of nicknames for my animals, and I won't be sticking to one name per pet anytime soon.

Growing up in a rural New Jersey town, having multiple pets was just a part of life. There was always a gaggle of cats slinking around our house and at least one dog nabbing treats from the mailman. And because these were childhood family pets, they were always christened with a name I usually didn't approve of. My Golden Retriever, for example, was initially named Rafter — after the famous tennis player Pat Rafter — but I later changed it to Big Boy, because he was actually a large dope and it just plain suited him.

When I moved out and claimed five cats off the street as my own, I assumed that because I was in control of their names, they'd actually stick. Boy was I wrong. It all started with my cat Big Momma, a particularly skeletal orange kitty I found in college who my roommates initially wanted to name Whiskey Cat. Because of the color of her fur, I initially thought she was male, as most orange cats are due to genetics. It wasn't until she led me to her brand-new litter of kittens that I realized the Whiskey Cat wasn't exactly a fitting name for a breastfeeding mom, so she became Big Momma. Today she oscillates between Big Momma and Queen Beauty, rules the roost in my home, and refuses to leave my husband alone for more than five minutes.

Related:
7 Surefire Signs You're a Card-Carrying Member of the Cat Lady Club

As for my other four cats? They've rotated and cycled through a handful of names each, and rarely ever go by what I'd originally named them. My oldest male — Big Momma's son — was initially named George, after the royal baby. But as I got to know him, I realized he wasn't a George at all. Given his happy-go-lucky nature, he earned the nickname Moonbeam, and because he's my only cat with a jingle collar — he prances around in it! — Mr. Jingles felt like a natural fit. And his nickname of Bebe? Well, he's just a clingy little baby who has a habit of waiting outside the shower for me.

The same goes for his sister, whom I called Bella at the beginning of her life because she's a beautiful Calico. While she's still a gorgeous feline, I spent most of one Fall college semester waking up every three hours to feed her out of the bottle. She had a tongue infection that wouldn't allow her to nurse properly, and given the fact that she was as close to a human baby as I've ever gotten, I changed her name to Baby Girl. It stuck for a few years.

Like people, their personalities grow and change, and sometimes that means their names change, too.

My other two cats went through the same growing pains, mostly because I mixed up their sexes when I first adopted them. It wasn't until Minnie — now Little Mister Minnie — grew to full-on chonk size after a few months that I realized he was, indeed, a male. His sister goes by the name Mrs. Butterworth (previously Gandalf, and sometimes Mrs. B for short) because she's an old soul with big eyes and the cutest meow.

My humungous Black Lab, Yogi, is the only one who has just two names, mostly because my husband had him long before we met. However, given his tendency to sit by the window and sulk when his dad leaves for work, I sometimes refer to him as Weeping Rino. Honestly, just play a little Sarah McLachlan in the background and you'll have a great backdrop for an angsty '90s music video.

Though I'm aware that having multiple names for my pets can make it confusing for friends and the occasional pet sitter, I truly feel the more nicknames you have for your pets, the more you love them. Like people, their personalities grow and change, and sometimes that means their names change, too. Am I in trouble when it comes to naming my first human baby? Most definitely. But I have a feeling my child will want to shake any embarrassing nicknames once he or she hits grade school, so I might not have a choice!