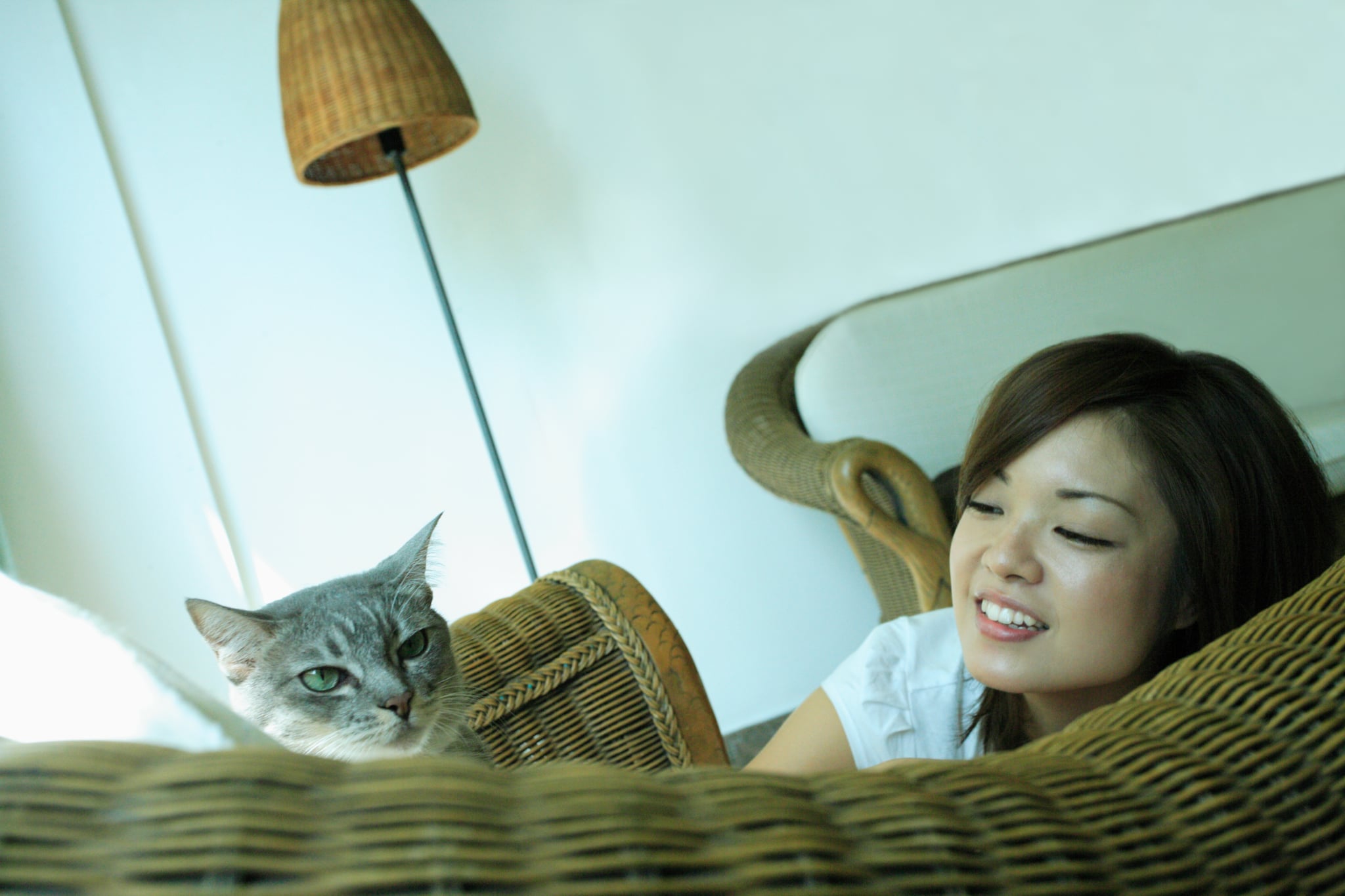 So you have a cat and you want to snuggle up with them because they're so cute and furry and sweet. We get it! Who doesn't want to boop their little noses while they sit on your lap or curl around your head in bed? If you have a cat who's not into cuddling, though, there are a couple things you can do. We spoke with two vets to get some insight on why some cats don't like to cuddle and whether you can train them to love it. See what they had to say when you keep reading.

Related:
16 Funny TikToks Starring Cats That Will Make You Wish Yours Was More Talented

Is There a Reason My Cat Won't Cuddle With Me?

We hate to break it to you, but for the most part, cats aren't cuddly animals. "Cats are generally more aloof and prefer to be near humans, but not necessarily to cuddle as much as a dog would," said Dr. Justine Lee, DVM, DACVECC, DABT, veterinary expert with Pumpkin Pet Insurance. Of course, not all cats are the same, and there are more affectionate cats out there (we've seen them all over TikTok), but that being said, some cats just don't cuddle.

"Many behavioral tendencies may come from your cat's past — such as what they learned growing up, how much they were around people when they were young, previous negative experiences, etc.," said Dr. Zaynab Satchu (who goes by Dr. Zay), DVM, Bond Vet's chief veterinary officer. "But it's also due to your cat's unique personality." You know your cat and you know what their personality is like, and that all factors into how they behave, including how much time they're willing to spend with you.

Also, if you're trying to cuddle your cat and they're fighting you, they may not like the way you're holding them or where you're holding them. In general, cats like to be up high so they can see what's going on around them — this is why they love cat trees — but they don't like their bellies exposed. Try not to hold them like a baby (unless you know your cat loves this), but instead hold them to your chest while supporting their butt. If you're sitting, let them figure out how to situate on your lap or next to you. Again, all cats are different, so you'll have to figure it out together.

Are Some Cat Breeds More Cuddly Than Others?

If you don't yet have a cat and want to look for one that might give you the cuddles you need, there are a few breeds that are known to be very friendly. "Ragdoll cats and ragamuffins are generally known to 'flop down' and lie on your lap," Dr. Lee told POPSUGAR. Dr. Zay agreed and added, "These cats got their name because they are so gentle that they usually don't mind being picked up and carried, like a doll."

Can I Train My Cat to Cuddle?

Trying to train a cat can be hit or miss, regardless of what you're trying to train it to do. However, training a cat to cuddle can be done! "It's important to start slow," Dr. Zay told POPSUGAR. "Trying to force your cat to do something they're not ready for may cause them to avoid you or to have a negative association with being petted. Cats adapt to new things best when they're allowed to move at their own pace. So, sit quietly and allow your cat to come to you. When they sit with you, reinforce the behavior by offering a special cat treat, toy, or a bit of catnip."

Dr. Lee actually did get a cat to cuddle, but it was a very long process. When she got her kitten, he wasn't affectionate, but she said she hosted nightly "forced love" sessions where she'd snuggle him for a minute and then reward him with a treat. However, it didn't really work. It wasn't until he started to get a little bit older that he became more affectionate, which just goes to show that cats absolutely do things at whatever pace they want.

Keep in mind that your cat may not like to be held but will let you pet them and snuggle on the couch or in bed, or maybe your cat only likes to be petted on their back but nowhere else. Spend some time figuring out what your cat likes and tolerates, and go from there. Also, show them affection while you're both calm and relaxed. Not only can your cat pick up on how you feel, but if they're also relaxed, they may be more likely to let you go in for a snuggle.

If your cat just won't cuddle, though, and you've tried gently forcing it (and rewarding them) and different methods of snuggling and petting to no avail, then you just have to accept that your cat doesn't want to cuddle. As they get older, their behaviors might change and they may grow more affectionate, but it's no guarantee.