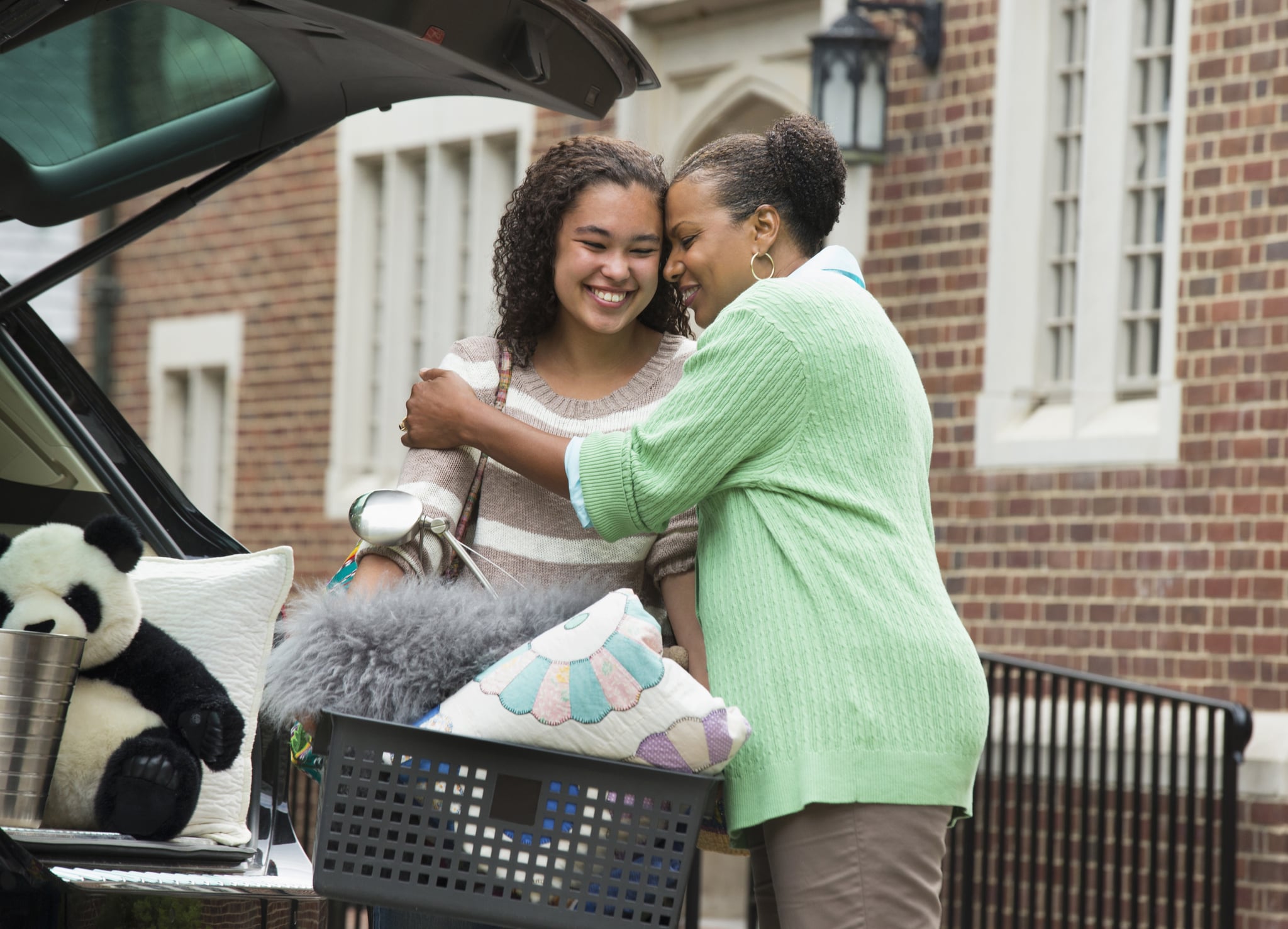 For so many, heading off to college is that first taste of freedom, maybe your first sip of alcohol or your first frat party. It's the chance to be out on your own and away from parental rules, supervision, and curfews.

It's a moment we look to and work toward basically our whole adolescent lives. There's a ton of buildup, expectation, and excitement with good reason. For me, however, it was a bit different. Sure, I was excited about the idea of it all, but as the day got closer, I felt more of a big bundle of nerves that turned into a stomachache the morning I was supposed to leave.

To be totally honest, I think I would've been completely fine hiding under the covers and sleeping in instead of jumping out to seize the world that morning. But there was no getting out of it. I went to a school about two and a half hours away from my house, so my mom and I got up bright and early for the drive. My parents are divorced, so my dad also stopped by to load up another car full of stuff and drive alongside us.

I have a vivid memory of myself standing in the parking lot, sobbing posthugs and just begging my dad through sniffles and tears to call me when he got home.

In that car ride, instead of daydreaming about the new guys I would meet, sporting events I would attend, if I would rush a sorority, and what my roommate would be like, I was nearly vomiting with the thought of leaving my parents behind and being on my own. I couldn't even eat — I tried to get down a few Cheerios before we took off and in the car, but could barely stomach them.

That's not to say I wasn't an independent teen. I was involved in tons of activities, out every night at dance practice or with friends, but now looking back (it's been 10 years), I know now that change is something that can be really hard for me, specifically big life transitions, so I look at that little young 'un with true compassion.

So when we got to my college, we met my roommate Amy (she was nice, phew), and began to unpack my room, slowly of course — I tried to procrastinate for as long as possible. But after awhile, it was time for the inevitable. It was time to say goodbye.

I have a vivid memory of myself standing in the parking lot, sobbing posthugs and just begging my dad through sniffles and tears to call me when he got home and only being reassured by the fact if I really needed them to come back, they could be there in just a couple of hours. I seriously did not know how I was going to survive the night let alone a full semester.

After Missing Her Own Graduation to Attend Her Son's, 1 Mom Got the Surprise of a Lifetime

But, it wasn't long before something magical happened. My dorm community was throwing a barbecue for all the incoming freshman, so when I realized that my parents' cars were definitely out of the lot, I turned around, took a deep breath, walked down the grassy hill in front of my building, and sat down next to my roommate. And it was the last time I shed a homesick tear (except maybe the night after my first really bad hangover).

It was a strange, almost instantaneous shift where I realized I was OK. From there, I went to visit a girl I met at a precollege meetup and went out with her and her floor the first night. The best thing about being a freshman in college was that everyone is new and wants to make friends just as much as you do, so people are really nice and welcoming. It wasn't long before I had a group to hang with, was in a groove with my classes, and familiar with all of the unique personalities on my floor. It was just the start of four years of learning, self-discovery, and incredible growth.

I think that moment is so seared into my brain because of the transition it visualizes. Going to college is a big deal. It really marks the last time you might live at home with your parents and the last time you look at yourself as a kid. But it's also the beginning of unbelievable opportunity. And when I say it's OK to cry, it's OK to mourn the loss of what was but then realize it's just part of the natural feelings that come with transition. Acknowledge the pain . . . and then let it pass. (I was amazed at how it quickly it did.)

Related:
My Parents Insisted I Attend a College They Could Afford — and I'm So Thankful

Everyone deals with change differently. For me, I needed to let out that emotion in order to feel OK and move forward. Now, I'm 28 and married, yet still look to that moment for reassurance from my own personal history when I go through a new life change that's scary or challenging. I know I'll be OK — better even — on the other side. So if you're heading to college this year and are a little scared of that unknown, just know that if you walk down that hill, you'll get through it, and it might just be the best thing you've ever done.