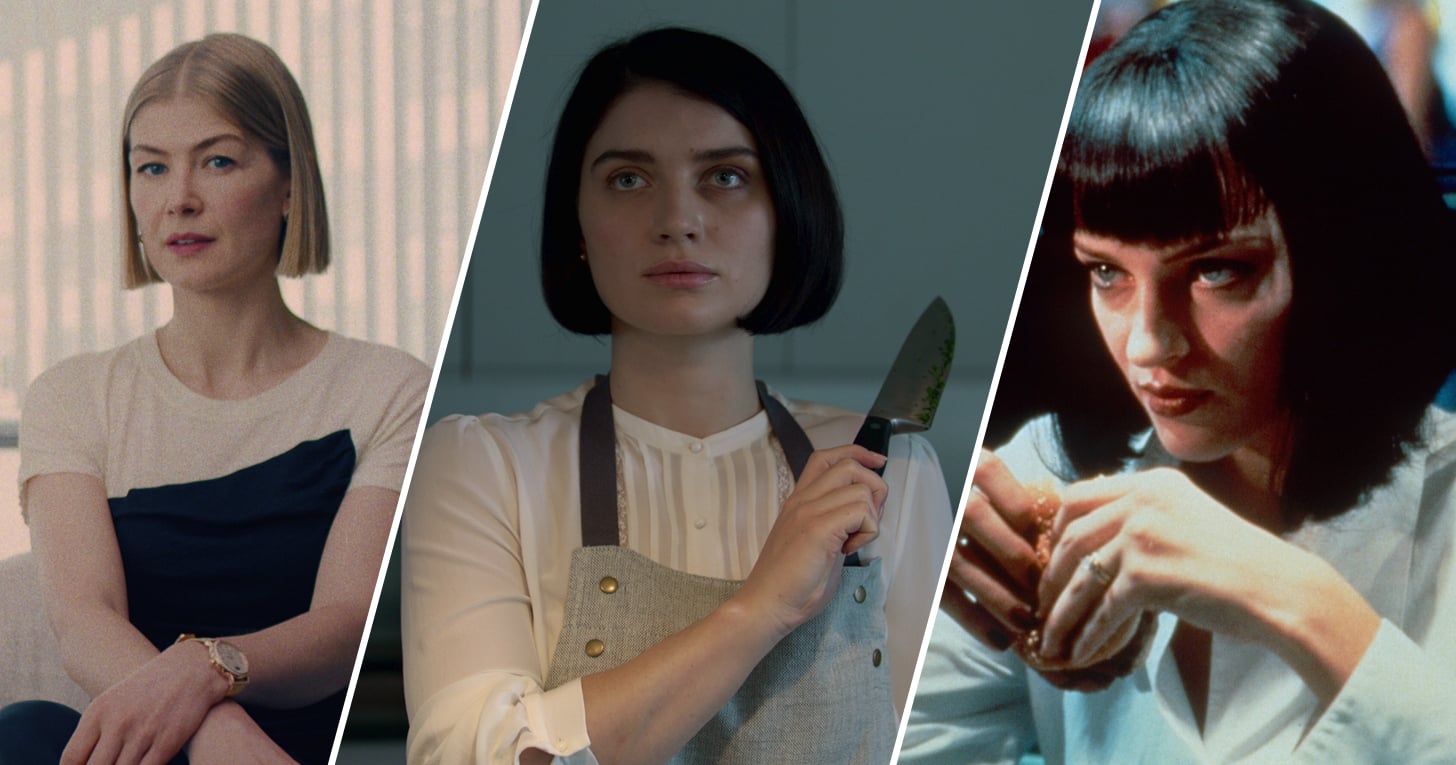 Any psychological thriller worth its weight in mind f*cks knows that strategic plot twists matter, but like an existential Carrie Bradshaw, I can't help but wonder: does a character's haircut, too? If so, surely there's a reason behind the one common denominator I keep noticing with all the strong women in these movies and TV shows: the blunt bob haircut.

To be clear, this is not your average bob with movement or layers; instead, the ends are crisp and razor-sharp, like the proverbial knife you'll more than likely see them holding at some point on screen. The personality traits embodied by this antihero, of sorts, are also strikingly similar: most are calculated, polarizing, strong, "put together."

Take Netflix's latest vicious thriller I Care a Lot, which shows Rosamund Pike as Marla, a cunning businesswoman who exploits the elderly for money with a smile — and a streamlined wardrobe and precision-cut bob to match. Lori Guidroz, the film's hair department head, previously told POPSUGAR that this was a carefully considered style choice.

"She was going to be wearing Victoria Beckham clothes the whole time and everything was going to be really extreme and sharp, so we settled on her having a severe bob," she said. "She's a woman who is very organized, determined, and not to be messed with. We wanted to portray that in every aspect of her look from head to toe."

Then, there's Behind Her Eyes, a new book-turned-series in which Adele — the lead character's wife he often alludes is "crazy" — shares a similar aesthetic. The meaning behind her bob haircut, according to the show's hairstylist Konnie Daniel, sounds familiar: "She spends a lot of time going to the hairdressers — she wants to look perfect for her husband, or what she thinks is perfect," she said. "The bob haircut is very intentional and gives her character a strong shape."

This association between bob and strong woman character isn't new — remember Mia Wallace in Pulp Fiction? Amy Dunne in Gone Girl? Beth in The Queen's Gambit? It's even the haircut Mulan gives herself when preparing for combat in the animated Disney film.

But why has the blunt cut been designated the antihero haircut of choice for women?

Abra McField, a psychologist with a hair doctorate certification and the founder of Abra Kadabra Hair & Healing, said haircuts are often a manifestation of how you feel or what you're going through. Choosing an intentional cut, like the blunt bob, could very well help emulate that on screen.

"A straight line symbolizes motionless and stability, meaning it won't deviate from where it is, which is indicative of the state of mind of a woman wanting to claim her power."

"Producers of movies oftentimes use this cut to convey strength, power, and hardness — an inability to break no matter what is going on in the world around them," she said. "When a woman takes her power back, she might go with a straight-edge cut with no softness and variations in lines because she wants to be taken seriously or wants to make a statement. A straight line symbolizes motionless and stability, meaning it won't deviate from where it is, which is indicative of the state of mind of a woman wanting to claim her power."

As for why it's often assigned to women depicted as "unhinged" in a film or series, that's all up to interpretation. "This blunt haircut to the contrary could speak to the world and convey a message of craziness, like the movies Gone Girl and Pulp Fiction, for example," McField said. "Or at least this is the perception of movie producers who really control the messages of haircuts and state of minds." (For the record, Gone Girl's hair department head, Kim Santantonio, told POPSUGAR: "The bob is a very controlled look. [Amy's] bob was just one part of a very complicated person who was always in control.")

Whatever the case, one thing is for sure: the blunt bob has, in many ways, become a uniform for the female antiheroes in psychological thrillers. Maybe it is an emblem of strength, power, and control — something women have historically had to earn the right to show in society. Or maybe hair is just hair, and this cut is simply easy to style and universally flattering. Who the hell knows. But don't you now kind of want one?

Netflix
Netflix's "Hello, Goodbye, and Everything in Between" Has a Dreamy Soundtrack to Match
by Monica Sisavat 14 hours ago