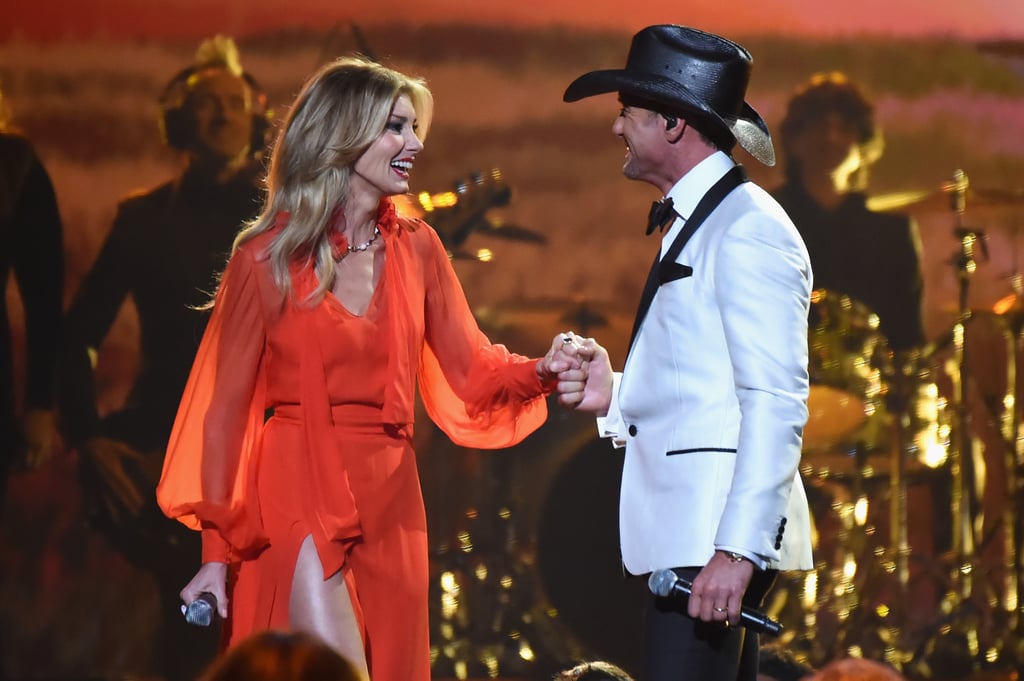 Faith Hill and Tim McGraw have been one of country music's superstar couples for more than two decades. The pair tied the knot back in 1996, and since then, they've raised three daughters, dropped hit album after hit album, and continued to share the stage together. Tim and Faith are currently on the road for their Soul2Soul tour, and in an interview with People, they opened up about how they keep their marriage going strong 21 years later.

They both agree that working together makes for some magical moments. "It's such a rare thing to be able to experience what we do for a living, and to do it together, really feels like all the moments are special," Tim said. Faith added, "I watch him perform and still to this day I'm awed by it."

When they aren't singing to sold-out crowds, the couple makes a point to prioritize date nights. "Funny, as we get older it's less about the big gestures and more about just spending the time together at home," Tim said. "For our 20th wedding anniversary, we stayed home in our pajamas and watched TV. We loved it."

Although they spend a lot of time together, Faith said they also have their alone time. "We both have our daily routines and we have our own dressing rooms," she explained. "We each have our own space to retreat to so we do get time to ourselves." And before each show, they make a point to continue a special tradition. "Tim and I share a quick quiet moment together before hitting the stage," Faith said. "Always praying."

Keep reading for a look at some sweet then-and-now moments between Tim and Faith, then check out their cutest pictures from over the years.

Related:
Hollywood Couples Who Have Been Together the Longest
Previous Next Start Slideshow
Tim McGrawFaith HillCelebrity CouplesCountry Music

Adele
Adele and Her Boyfriend, Rich Paul, Turn the Grammys Into a Glamorous Date Night
by Monica Sisavat 10 hours ago