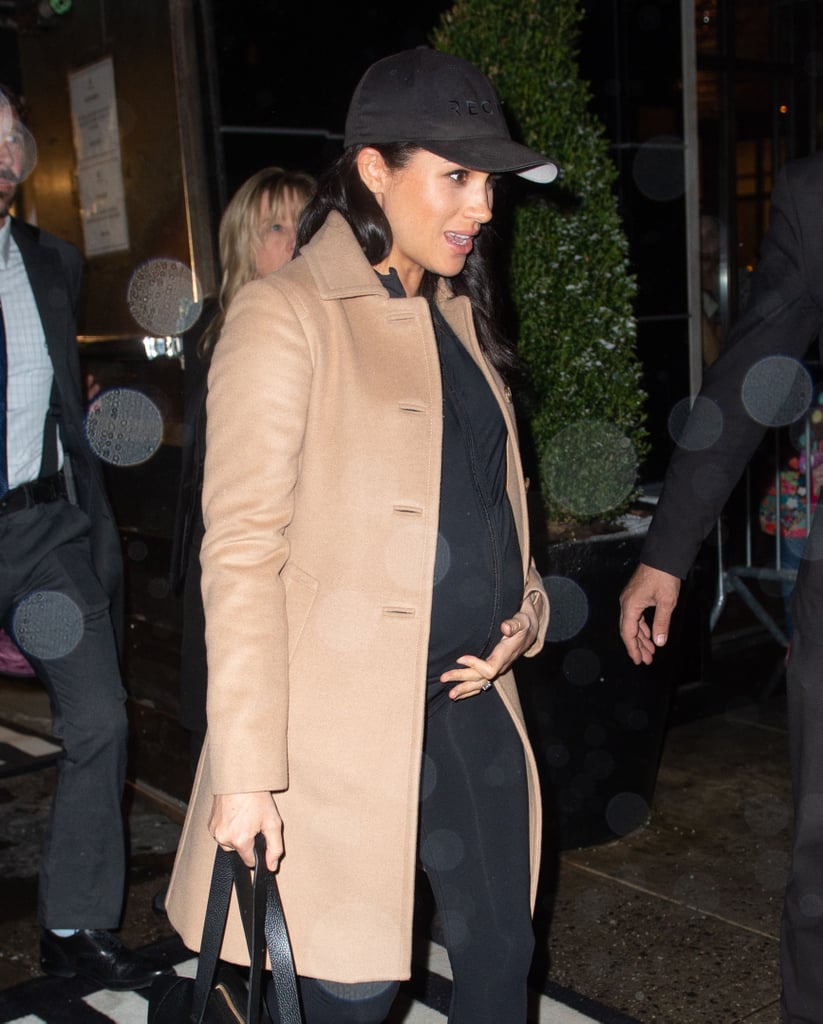 Meghan Markle is making her way home to London after a whirlwind week in the Big Apple. The Duchess of Sussex was seen leaving her hotel in NYC on Wednesday, presumably to head to the airport and back into Prince Harry's arms in the UK. Dressed in leggings and a black sweater, Meghan layered up in a camel coat and sleek black baseball cap, cradling her belly as she headed to the car. Earlier in the day, Meghan was surrounded by a mix of longtime pals and famous friends at her lavish baby shower at the Mark Hotel. The event was reportedly hosted by Serena Williams and Amal Clooney, featured dessert tasting and flower-arranging lessons, and cost nearly $200,000 (don't worry — Meghan's very generous friends footed the bill).

As Meghan was being showered with gifts, Beyoncé and JAY-Z were being showered with praise. The couple won the Brit Award for best international group for their work as The Carters, and in lieu of accepting their trophy in person, they thanked fans via video message, opening with a framed portrait of the duchess in a tiara and pearls. Beyoncé followed up with an Instagram photo from their video shoot, along with a heartfelt shout-out to Meghan in her caption. "In honor of Black History Month, we bow down to one of our Melanated Monas," it read. "Congrats on your pregnancy! We wish you so much joy." In short, we all screamed.

Before celebrating her and Harry's bundle of joy, Meghan got in some BFF bonding time with stylist Jessica Mulroney, fashion designer Markus Anderson, and Suits actress Abigail Spencer during dinner at the Polo Bar on Tuesday night. Meghan was all smiles as cameras caught her arriving, and she appeared equally relaxed while grabbing lunch with Abigail that same day at the Mark. Once Meghan gets back to London, it's also back to business: she and Harry are scheduled to travel to Morocco for a slate of official appearances next week. Somewhere in there, the couple are also expected to make their move from the Kensington Palace grounds to Frogmore Cottage in Windsor, where they'll get ready to welcome their new baby in late April. Good thing Meghan got a few relaxing days in . . . and a shout-out from Queen Bey doesn't hurt, either.