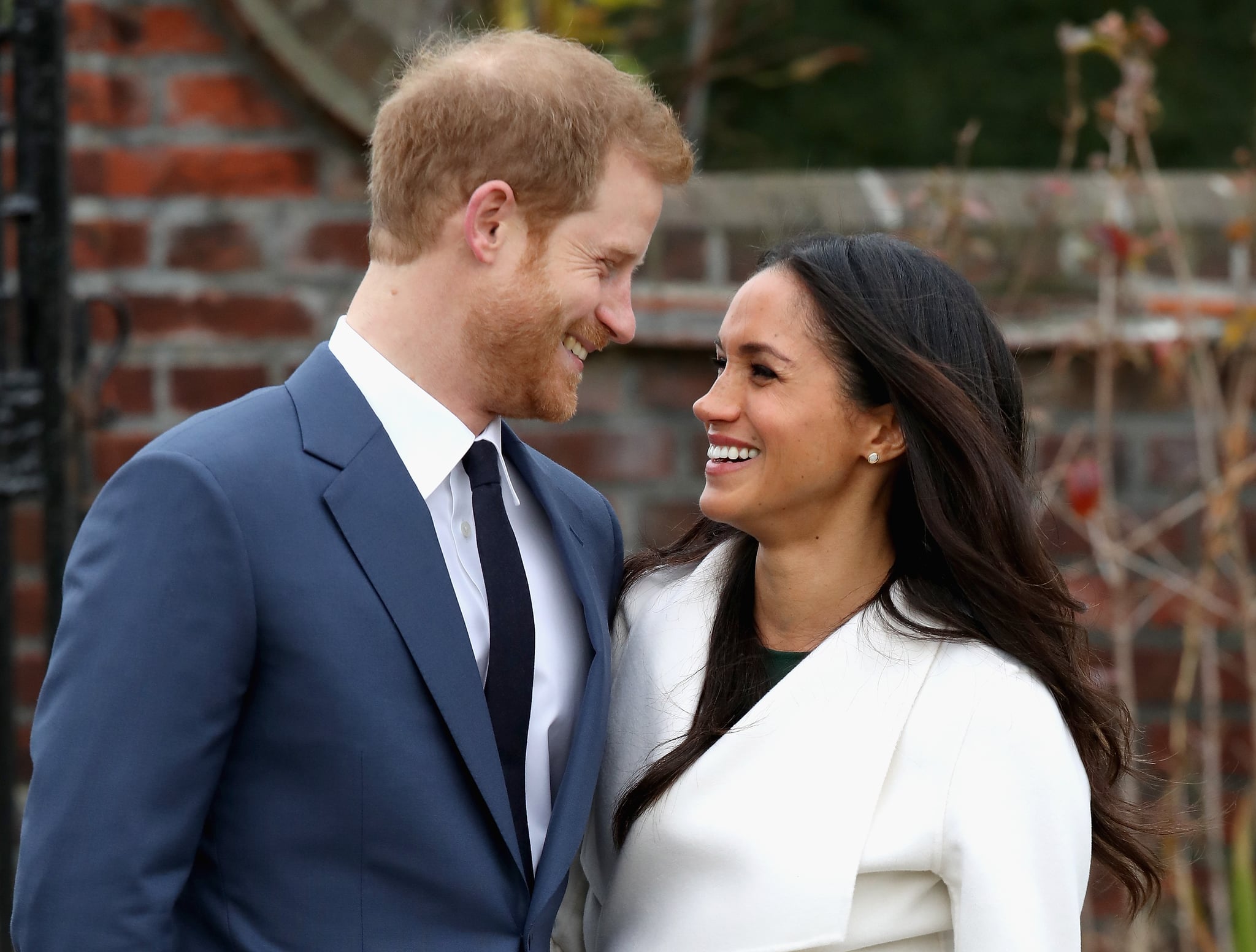 Prince Harry and Meghan Markle are days away from officially becoming husband and wife! The couple first struck up a romance back in 2016, and details about their upcoming nuptials have been trickling in ever since they got engaged in November 2017. While Prince William and Kate Middleton's wedding was a lavish affair watched by billions around the world, it turns out Harry is envisioning the total opposite for his.

According to Us Weekly, "pomp and pageantry" are the last things Harry reportedly wants. "It would stop it from turning into a total media circus and give the day a sense of privacy that Harry so badly craves." Still, that doesn't mean Harry won't have the support of his family. According to the insider, there's "no question" that Queen Elizabeth II would attend. Keep reading to see everything we know so far about Harry and Meghan's big day.

Harry and Meghan are set to tie the knot on May 19, 2018. The couple is reportedly expediting the wedding to ensure that Harry's grandfather, Prince Philip, can attend. Philip is 96 and recently retired from his royal duties.

The couple will exchange "I dos" at St George's Chapel at Windsor Castle. Queen Elizabeth II "has granted permission for the wedding to take place at the Chapel" as it is one of her official residences.

The wedding service will take place at 12 p.m London time, followed by a carriage procession at 1 p.m. from St George's Chapel through Windsor town, returning to Windsor Castle along the Long Walk. This will allow members of the public in Windsor the chance to see the newlyweds.

According to Us Weekly, Meghan had a secret bridal shower at England's Soho Farmhouse in March. While it's unclear which of Meghan's friends were in attendance, sources say Markus Anderson, who was initially rumored to have set up Meghan and Harry, coordinated the whole thing.

Kensington Palace announced in late March that Harry and Meghan have chosen a lemon elderflower cake "that will incorporate the bright flavors of Spring" from Claire Ptak of Violet Bakery. While royals usually opt for a more traditional fruit cake, the floral dessert is to be decorated with buttercream and seasonal flowers.

While Harry's brother Prince William will serve as the best man, Meghan has decided not to have a maid of honor. "She has a very close-knit circle of friends and she didn't want to choose one over another," a palace spokesman said.

It also seems like Prince George and Princess Charlotte will have special roles during Harry and Meghan's big day. It is expected that George will be a pageboy, while Charlotte will serve as a young bridesmaid.

Harry and Meghan's wedding invitations have officially been sent! On March 22, Kensington Palace gave us a glimpse of the coveted invites on Twitter.

The invitations follow many years of Royal tradition and have been made by @BarnardWestwood. They feature the Three-Feathered Badge of the Prince of Wales printed in gold ink. pic.twitter.com/cd7LBmRJxO

Harry and Meghan have slowly but surely started revealing a few people on the guest list. While the British Armed Forces and 1,200 members of the public will be in attendance, Princess Diana's three siblings, Lady Sarah McCorquodale, Lady Jane Fellowes, and Charles Edward Maurice Spencer, will attend as well Meghan Markle's mother, Doria Ragland. Priyanka Chopra also confirmed in late April that she's going to the royal wedding.

Kensington Palace recently announced via Twitter that floral designer Philippa Craddock has been chosen to create the flower displays at St George's Chapel for Harry and Meghan's big day. To ensure the event is one to remember, Philippa revealed that she's using "locally sourced foliage," as well as, where possible, "flowers and plants that are in season and blooming naturally in May." Sounds dreamy, no?

Harry and Meghan have also chosen to honor the late Princess Diana by including white garden roses (Diana's favorite) inside St. George's Chapel.

Much like Will and Kate's wedding, Harry and Meghan's nuptials will be split into two parts, meaning they will have "second outfits for the evening reception." There will be a reception at St George's Hall for the couple and the guests from the congregation, and later in the evening, Prince Charles will host a private evening reception for the couple and their close friends and family.

In a statement released by Kensington Palace in April, it was revealed that Harry and Meghan's nuptials "will include a number of well-known hymns and choral works," as well as performances from a selection of choral groups, soloists, and musicians.

From Ed Sheeran to Elton John to the Spice Girls, there have been so many rumored performers, but none of them have been officially confirmed yet. However, Ed did say that Harry and Meghan have not enlisted him since he'll be playing a show in Ireland at the time. Hmm . . . who could it be?

Harry and Meghan have selected photographer Alexi Lubomirski to take their official wedding pictures. The British photographer, who also took their engagement photos, couldn't help but gush about the honor on Instagram. "I could not be more thrilled or honored to photograph this historic occasion," Alexi wrote. "Having taken Prince Harry and Ms. Markle's engagement photos, it brings me such joy to be able to witness again, the next chapter in this wonderful love story."

Meghan's Walk Down the Aisle

Despite previous reports that Meghan's mom would be walking her down the aisle, Kensington Palace confirmed in May that her dad, Thomas Markle, will be doing the honors.

Will It Be Televised?

Yes! According to Brides, a spokesperson for Kensington Palace announced during a recent press conference that everyone will have the pleasure of tuning into Harry and Meghan's big day, just like we did for Will and Kate's wedding in 2011. "The couple of course wants the day to be a special, celebratory moment for their friends and family," the spokesperson explained. "They also want the day to be shaped so as to allow members of the public to feel part of the celebrations, too and are currently working through ideas for how this might be achieved."

Do Harry and Meghan Have a Wedding Registry?

The couple has asked that their guests donate to charity in lieu of gifts. "Prince Harry and Ms. Meghan Markle are incredibly grateful for the goodwill shown to them since the announcement of their engagement and are keen that as many people as possible benefit from this generosity of spirit," Kensington Palace said in a statement in April. Harry and Meghan have selected seven organizations, including CHIVA (Children's HIV Association), Crisis, Scotty's Little Soldiers, and The Wilderness Foundation UK.

The Royal Mint released Harry and Meghan's official wedding coin in May, which depicts the couple during their engagement photo shoot at the Sunken Garden in November 2017. The coin comes in both gold and silver proof and there is also an uncirculated version.

Celebrity Couples
The Cutest Photos of Christopher Briney and His Girlfriend, Isabel Machado
by Alicia Geigel 23 hours ago