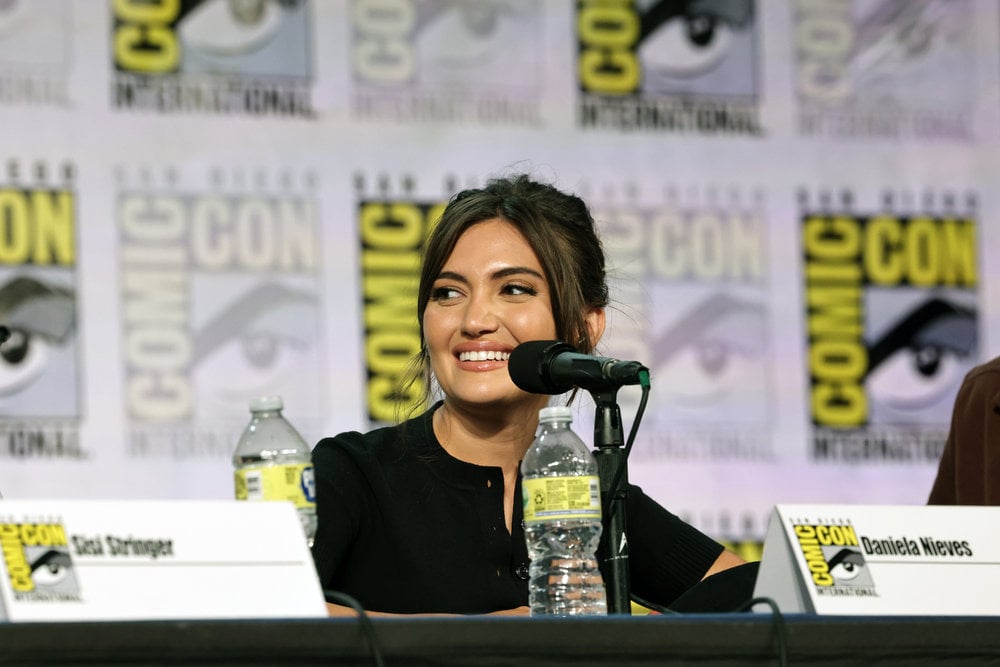 "Sometimes I just want to sit back and watch a girl be a princess," actress Daniela Nieves tells POPSUGAR. She's starring in Peacock's new "Vampire Academy," based on the YA international bestsellers and from the creative mind behind CW's hit vampire franchise. The show follows two best friends, Sisi Stringer's Rose as the badass fighter/guardian and Nieves's reluctant Princess Lissa. She gets thrown into vampire politics when her family dies in a car crash and she becomes head of her royal household.

Obviously, "princess" is a loaded term. People use it as an insult to describe spoiled or entitled women. It's got those colonial roots. The Disney pantheon has also become synonymous with a pink and frilly definition of girlhood. And in a misogynistic society (like the one we live in), anything coded as feminine is ripe to get torn down. Still, "princess" is aspirational for many girls, particularly those outside the blond-haired, blue-eyed, thin beauties of old. And Lissa gets to have it all — adventure, beautiful outfits, a love interest, and more. For Nieves, it's a question of who gets to be centered: "I just want to sit back and watch [the Latina] fall in love with the main guy. I don't want her to be the sidekick. I want her to be the main character. I want to see the big love story for her because I want the big love story in my life. I want to be the main character in my life. I don't want to feel like I'm on the sidelines."

"A lot of times, when there is representation for Latinas, it's about her being Latina."

And that's what she gets in "Vampire Academy," an opportunity her manager told her to "try not to get attached" to when she sent in her audition tape. Part of what makes it so rewarding for Nieves is that it's a different type of representation, one not focused on exploring identity. "A lot of times, when there is representation for Latinas, it's about her being Latina. It's about her coming from Venezuela. It's about all she has to struggle with being an immigrant," she says before asserting, "I already live that. I was an immigrant. I know what that's like." She knows there's value in these identity-focused stories, but she also wants other opportunities. 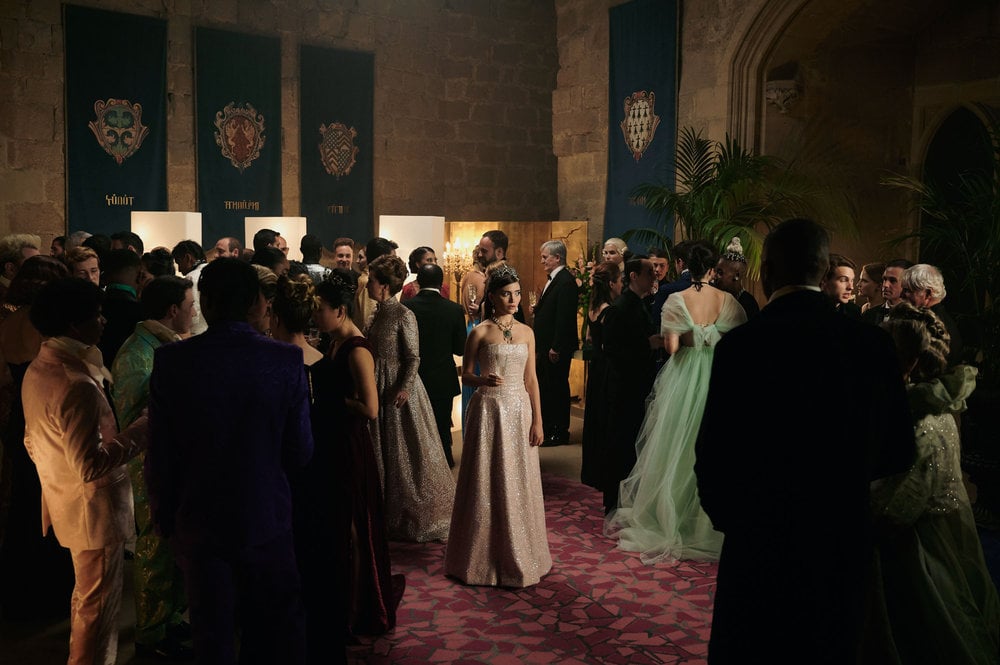 Nieves immigrated from Venezuela when she was a baby. Before she was 10 years old, she was acting in telenovelas, an experience she knows helped prepare her for "Vampire Academy," even though it couldn't be more different. For one, there's just the sheer volume of it. Nieves recounts how in her telenovela days, "we would shoot maybe 100 episodes a year . . . and we would shoot for maybe eight months out of the year." In contrast, for "Vampire Academy," "we shot 10 episodes in seven months." Telenovelas taught her how to work under pressure for long hours and how to learn lines quickly. But she's grateful for the opportunity to "take your time and really be in this world, really work on this character, and really see how it pays off," citing "Vampire Academy"'s immersive quality, which is largely thanks to its thoughtful cinematography, costuming, and more.

In addition to this high production value, "Vampire Academy" also boasts a decidedly progressive worldview. The two leads are Black and Latina, and their love interests and authority figures are equally diverse. As viewers, we bring our ideas of race into watching the show, but they don't apply here. The same goes for sexuality. Characters in "Vampire Academy" have same- and opposite-sex relationships, and the show and its many characters treat them all the same. Even gender works differently. The halls of power are evenly lined with men and women. This equity, however, doesn't hold when you take class into account — the "Vampire Academy" society is strictly divided into three groups, with the women in the lowest rung, the Dhampir, forced to pick between unequal breeding relationships (a la "The Handmaid's Tale") and soldiers, likely to die young. Either way, they're in service to the Moroi royals.

It's across this divide that friends Lissa and Rose find themselves — Lissa, the princess, and Rose, the guardian. Theirs is the central relationship, more important than any romance either of them embarks on. In fact, both their faces are on the show's key art, proving their relationship's significance. Nieves says she hopes the show helps "young girls realize that their female friendships are so important." 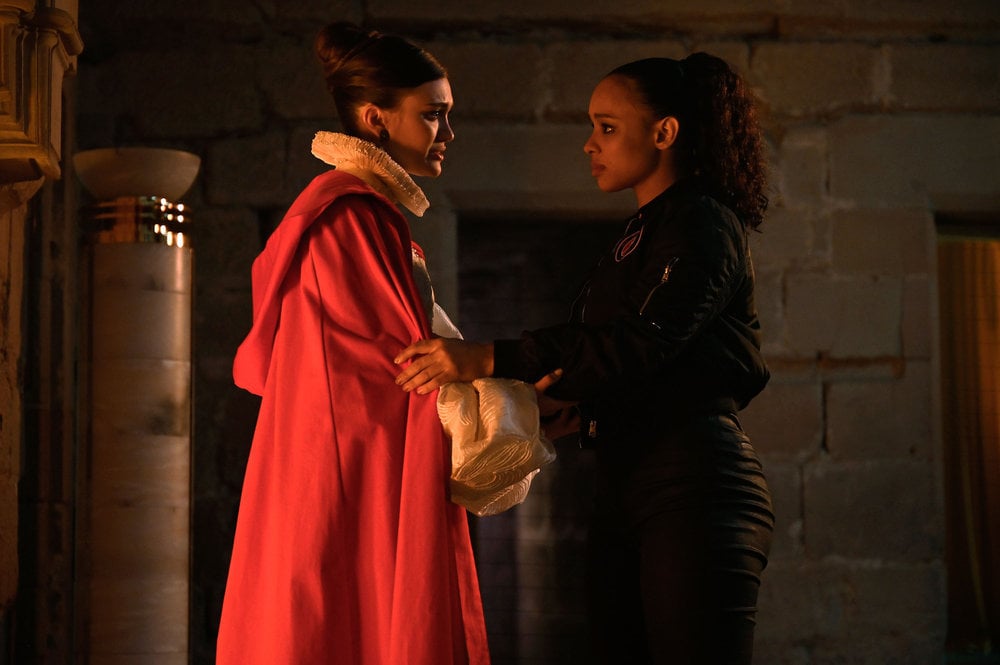 For her part, Nieves has embodied both sides of Lissa and Rose's friendship dynamic. She even read for the Rose role. But down to the nomenclature, Rose is so similar to Nieves's first big English role, the one that marked her crossover from Spanish-language telenovelas. As Angie Cruz on Nickelodeon's "Every Witch Way" and its spinoff "WITS Academy," Nieves played the tomboyish best friend who literally becomes a "guardian."

"I want to do something different," she says. "I've never played something like a princess. There's never been anything [like that] in my career. So I was super excited to play Lissa." Still, she wants to know why it's so rare, asking, "Why can't the Latina just be the princess?" It's a question worth asking, particularly as shows like "The Lord of the Rings: The Rings of Power" face backlash for casting nonwhite actors in their fantasy roles.

On that particular cultural phenomenon, Nieves calls bullsh*t: "We can imagine vampires. We can imagine zombies, [and] monsters. We can imagine the craziest things. How can we not imagine that they would be Latina? Or they wouldn't be Korean? Or they would be Black?" For her, "it's just so important to make [diverse casting] a normal thing so that hopefully in the future, it is not even a thing anymore. It's just what we see — because it's what we see in our day-to-day lives anyway. [So], why can't we see it on TV as well?"

"Vampire Academy" is working to make sure we can. Whatever your background, Nieves believes "you can see yourself in this show."

"There is no Moroi and Dhampirs in real life, but there's definitely classism," she says. "There's definitely discrimination. There's definitely hopelessness towards the justice system. Our show is this beautiful thing that you can escape into . . . but at the same time, [you can] get elements of relationships, of growth, and of learning things about yourself, that are relevant to now." It's a winning combination and one that fantasy has employed since it started, drawing parallels between current events without being too heavy handed about it.

"Vampire Academy," with its nonwhite women leads, is political in its very existence. This is something Nieves can relate to as a Latina making it in Hollywood — people like her are few and far between. And it's even rarer for Latina actresses to take center stage. But that's exactly what Nieves is doing, daring to play the princess and finding the joy and contradictions in the part.

Jennifer Lopez
J Lo on Helping Latina Entrepreneurs With $14 Billion in Loans: "We Just Haven't Had the Opportunities"
by Chandler Plante 5 hours ago