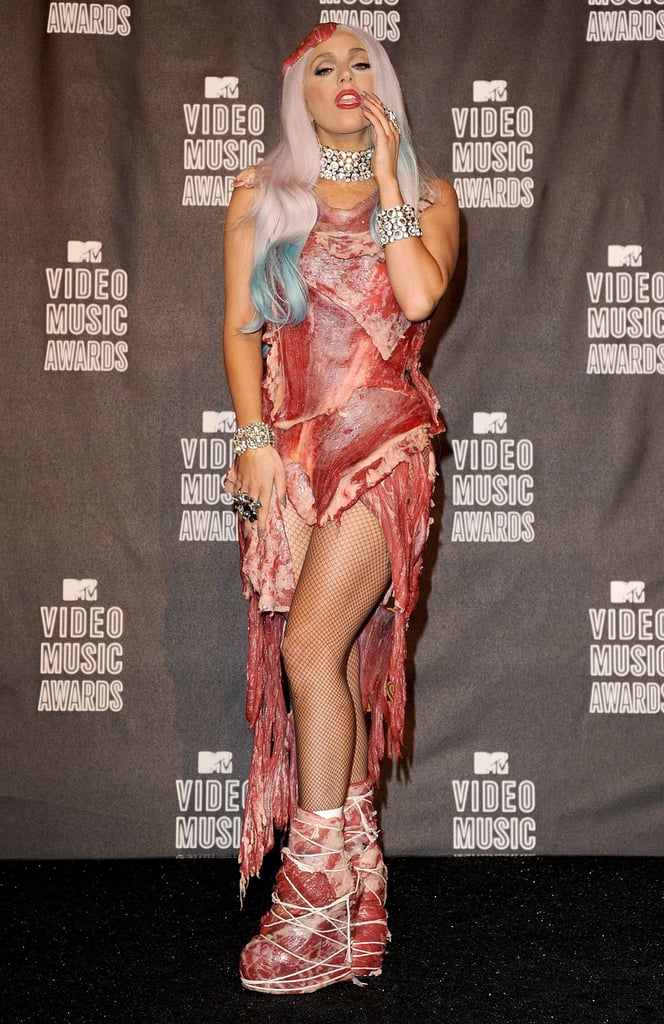 2010: Lady Gaga Showed Up to the MTV VMAs in a Meat Dress

Lady Gaga wearing a dress made out of raw meat was definitely a moment that will go down in VMAs history. Not only because, um, hello, it was made entirely out of real slabs of meat, but because of the powerful message behind it.

"As you know, I am the most judgement-free human being on the Earth. However, it has many interpretations," Gaga said while explaining how the dress was tied to her protest against the military's "don't ask, don't tell" policy. "If we don't stand up for what we believe in and if we don't fight for our rights pretty soon, we're going to have as [many] rights as the meat on our own bones. And, I am not a piece of meat."

Even though Gaga's meat dress seemed totally unexpected at the time, it was just the beginning of what was to come. In 2011, she made an egg-straordinary entrance at the Grammys, and two years later, she arrived at the American Music Awards on a human horse (and, um, performed with R. Kelly). Oh, and remember that time she made someone vomit during her performance? Classic Gaga. What surprises will she have in store for us in 2020?

Fashion News
Fendi x Skims: How the Collaboration Came to Be and What's in the Collection
by Sarah Wasilak 13 hours ago

Eve
Throw It Back With This Best Hits Playlist From Queens Stars Eve, Brandy, and Naturi Naughton
by Naledi Ushe 3 days ago

Fashion Video
Normani, Justine Skye, and Sydney Sweeney Tell Us the Story of Their Steve Madden Shoes
by Sarah Wasilak 1 week ago