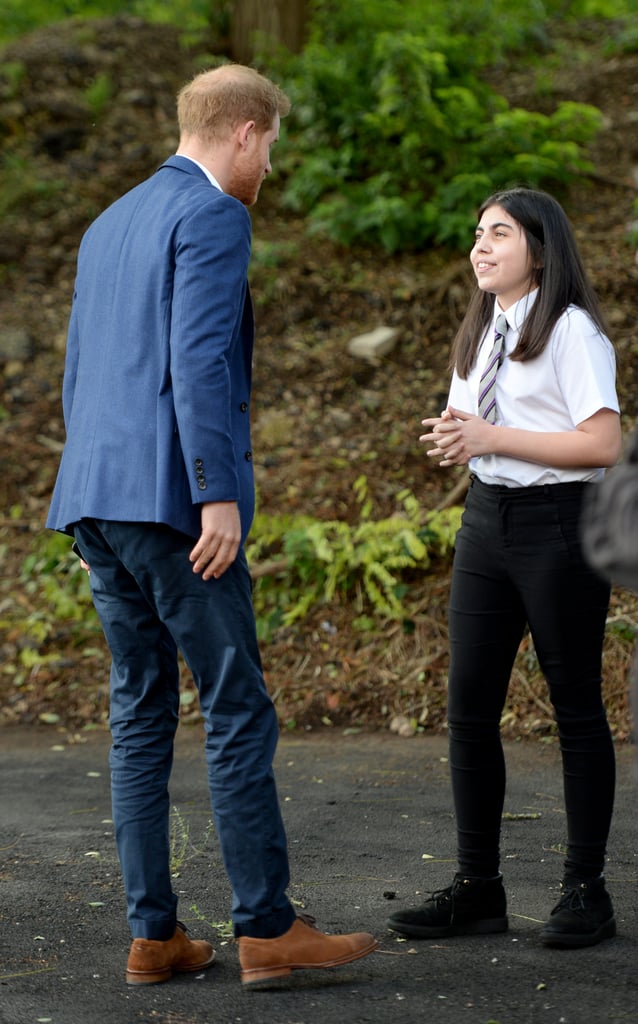 Prince Harry marked World Mental Health Day with a special visit to Nottingham on Thursday. The Duke of Sussex — who has been a longtime advocate for mental health — stopped by Nottingham Academy, where he met with members of the EPIC Partners youth mentoring program and discussed the importance of mental health and emotional well-being. Harry took part in a school assembly, shared a cute moment with Barney the therapy dog, and before heading out, he met up with 14-year-old Aleyna Genc.

Aleyna, who is recovering from a brain tumor, has been exchanging letters with Meghan Markle, and Harry had her listen to a voicemail the duchess recorded especially for her. "I've been lettering with Meghan for around two years now and she sent me a little voicemail, and I listened to that," she told reporters. "I just sent her a letter because she made a speech and that was the one that really inspired me: her UN women's speech. I just wrote to her to say how much it inspired me, and we have been lettering ever since." Aw!

Harry then ended his trip with a stop at the Community Recording Studio in St. Ann's, which is "a youth organization that teaches video and music skills, allowing a creative outlet for self expression."

Prior to his visit, Harry posted a video on the Sussex Royal Instagram account of him and Ed Sheeran encouraging viewers to care for the people around them and break down the stigma surrounding mental health. "Reach out, make sure your friends, strangers, look out for anybody that might be suffering in silence," Harry says in the clip. "We're all in this together."

Harry's outing comes a little over a week after it was announced that he filed a claim against Mail on Sunday and its parent company, Associated Newspapers, for leaking and publishing a private letter written by Meghan. The duke is also suing News UK (who owns The Sun) and MGN (who formerly owned The Daily Mirror) over an alleged phone hacking.

Related:
Prince Harry's Net Worth Is Impressive, but It Might Not Be as Much as You'd Expect
Previous Next Start Slideshow
The RoyalsPrince HarryMental HealthThe British Royals

Apps
J Balvin Is Launching Oye, a Bilingual Mental Health App Inspired by His Own Struggles
by Maggie Ryan 3 days ago