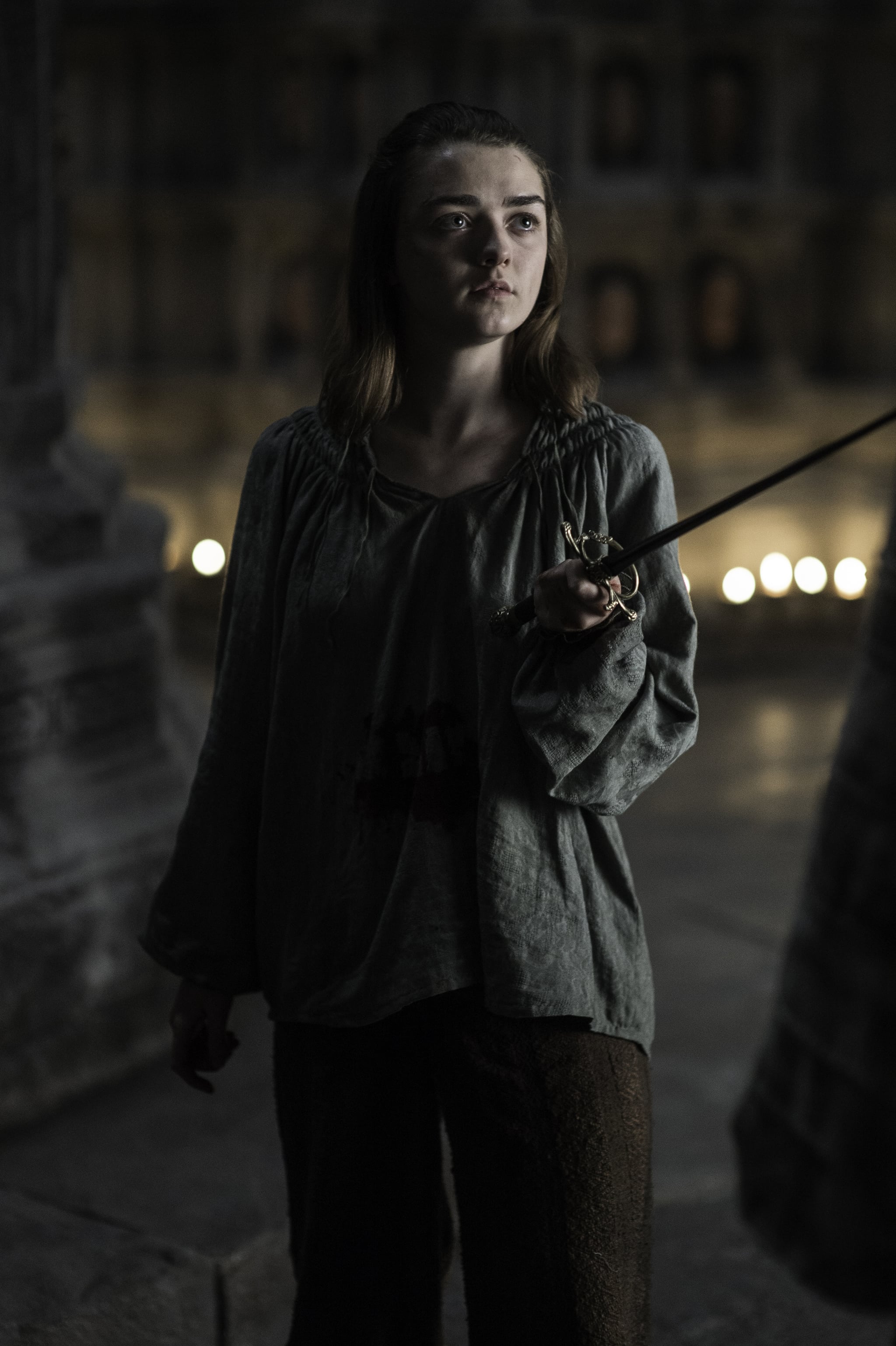 If Game of Thrones has taught us anything, it's that no character, no matter how powerful, is safe from death. With the highly anticipated Battle of Winterfell upon us, fans are fearing the worst for some of our favorite characters, including Arya Stark. While we hope our weapon-wielding girl survives the battle, one Reddit user points out that a quote from George R.R. Martin's A Song of Ice and Fire series, published in 1996, might foreshadow Arya's death. Following an argument with Septa Mordane and Sansa during her sewing lessons in the first book, Arya runs crying out of the room and later finds Jon, who says something to Arya that might hold a deeper meaning than he intends:

"The show is done," he said. He bent to scratch Ghost behind the ears. The white wolf rose and rubbed against him. "You had best run back to your room, little sister. Septa Mordane will surely be lurking. The longer you hide, the sterner the penance. You'll be sewing all through winter. When the spring thaw comes, they will find your body with a needle still locked tight between your frozen fingers."

Excuse me?! OK, we can't blame Jon, because it's super unlikely that he understood exactly what he was foreshadowing, but that last line might have just cursed Arya to die an icy death — and with the Battle of Winterfell coming up, it might happen sooner than we think. Longtime fans of the show remember that, back in season one, Arya names the sword Jon gives her Needle because it's so thin, and it has long since been her weapon of choice in combat.

Related:
Here's How Arya Got Those Gnarly Scars on Game of Thrones — There's Just 1 Problem

While Jon is clearly referring to a sewing needle in the quote, Reddit user ultra1994 goes on to suggest that "sewing" might actually refer to Arya killing off her enemies one-by-one with the help of her trusty sword, and the quote itself might be hinting at the fact that Arya will die in a battle against the White Walkers at Winterfell with Needle in her hand.

Knowing how strong-headed Arya can be and how much Martin loves to foreshadow the deaths of his characters before killing them off, it's totally possible that this quote could be a hint at Arya's fate. All in all, things aren't lookin' too hot for our girl. But there's hope for her yet! At a panel in Mexico in 2016, Martin said Arya is his wife's favorite character. "She does have a favorite character, and she has threatened to leave me if I kill that character, so I do have to be very careful about that," Martin said, and thank you, Parris!

While we have our fingers crossed that Arya survives so she can carry out her mission to kill Cersei and maybe even make things official with Gendry, you can never get too attached to anyone on a show where dragons roast people alive and the dead, or undead, could turn on you at any moment. This news doesn't bode well for our favorite teenage assassin, but some theories still suggest she'll survive, so who knows? If this line really is foreshadowing Arya's death, then we can only hope she doesn't come back as one of the undead.