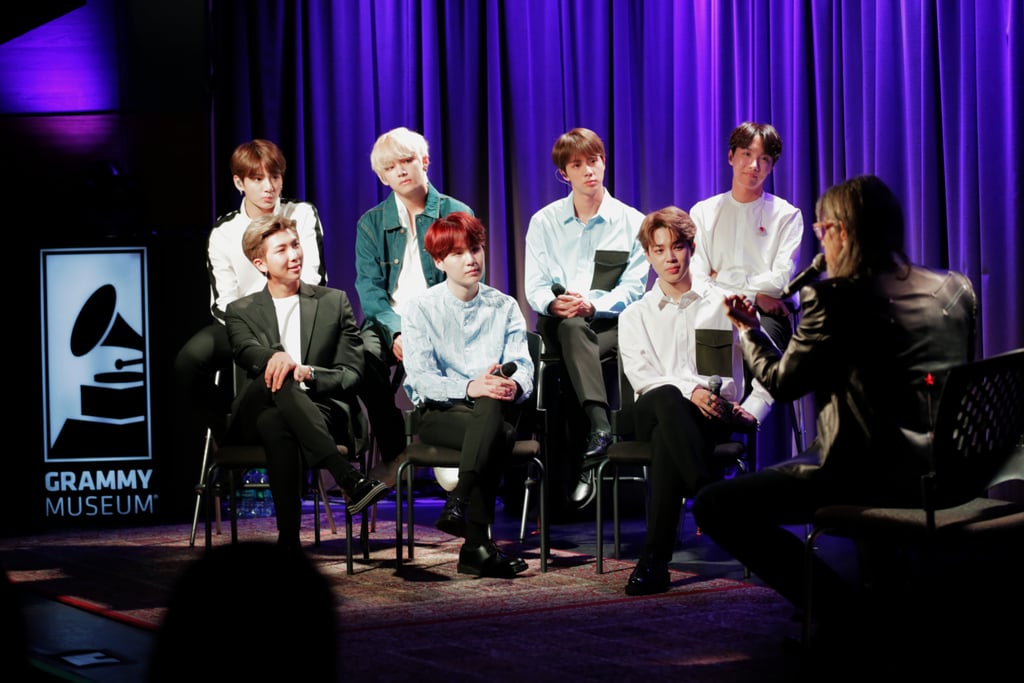 There's no doubt that the K-pop phenom BTS has been making monumental waves here in the US. Having recently topped the Billboard 200 albums chart with their album Love Yourself: Answer, on which they collaborated with Nicki Minaj on their track "Idol," and having just embarked on the North American leg of their world tour in Los Angeles, their accolades stretch further than most. And as BTS continues to grow their fan base, it's clear that these boys are only gaining momentum and growing larger into what some have compared to being the Beatles of this generation.

The group recently sat down with Scott Goldman, the Grammy Museum artistic director, at the Clive Davis Theater in the Grammy Museum to have an intimate conversation about their fans, their songwriting process, and how their music has evolved through the years. While we knew that the boys were talented and deserving of every recognition they've earned so far, we were surprised to hear how involved and collaborative they are in their songwriting process.

J-Hope said, "We all try hard to do our roles, whether it's writing lyrics or songs. We try to participate together as much as we can. I think our participation in the process makes the music more sincere, and it changes our attitude about how we approach ourselves." And truly, this involvement speaks to their success both in Korea and internationally.

Jimin added, "I think a lot of the evolution takes place in the recording booth when we're actually recording a song. The lyrics and melody that may seem OK . . . once we actually start recording it, we may identify some problems. So then we'll come together, we'll discuss it, and then we'll talk about the changes that we can make."

"I think our participation in the process makes the music more sincere, and it changes our attitude about how we approach ourselves."

While their hard work and individuality have taken their group far, the members also know that they owe their international success to their fans, which V confirmed. "The fans gave us the wings to allow us to be where we are. We're always thankful, and we know that we're here thanks to our fans."

See more photos from their appearance at the Grammy Museum ahead!

Related:
Our New Favorite Workout Playlist Is All K-Pop, and It's Amazing
Previous Next Start Slideshow
Grammy AwardsMusicBTS